Book Tour for A Rake’s Rebellion by Cynthia Breeding (GIVEAWAY)

A marriage that starts out in name only soon becomes something more in this historical romance of opposites attracting.  Keep reading to get a tempting taste of A Rake’s Rebellion by Cynthia Breeding, then add it to your bookshelf.  In honor of this third installment in The Rake Trilogy make sure to fill out the form below for the chance to win a print copy of the first book in this series too! 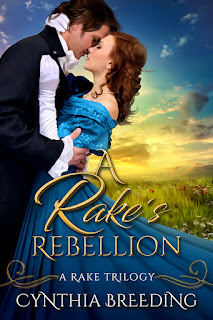 After a night of debauchery, Lord Barclay wakes up to find a woman in his bed. That’s not unusual, but this one is fully clothed. When she tells him they are married, he is instantly cold sober and looking for a way out.
Miss Sarah Vincent, an orphan raised in an American convent, didn’t ask for this marriage. She’ll be damned if it’s in name only. But seducing a man? How ever will she do that?! Good thing her friend lent her a copy of The Kama Sutra...
Brice starts to wonder what has come over his young wife. She’s suddenly taking charge of him, and their house, and no longer the timid woman he assumed her to be.
Despite his aversion to this marriage he’s starting to want his wife…in every way possible. 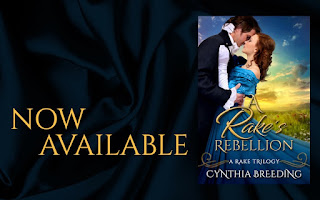 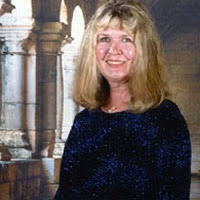 CYNTHIA BREEDING is an award-winning author of eighteen novels and twenty-four novellas. She currently lives on the bay in Corpus Christi, Texas, with her absolutely-not-spoiled Bichon Frise and enjoys sailing and horseback riding on the beach.

a Rafflecopter giveaway
at November 27, 2019