Book Tour for When You Close Your Eyes by Roxanne D. Howard (GIVEAWAY)

A woman unsatisfied with her life finds her dreams becoming a reality after she returns home for her father’s funeral.  Keep reading to get a tempting taste of When You Close Your Eyes by Roxanne D. Howard, then learn more about this book by visiting the other sites hosting this tour.  In honor of this emotionally intense contemporary romance make sure to fill out the form below for the chance to win a $20 bookstore GC too! 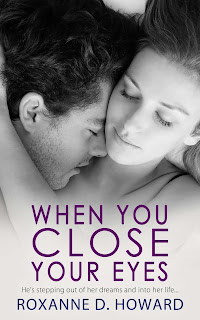 Dreams are the perfect shelter for fantasies, safe havens to step inside without changing our daily lives. For Lark Braithwaite, all that is about to change. During the last six months, Lark has dreamt of a mysterious Irish lover who knows what she wants and gives her exactly what she needs. In her waking life in busy London, things aren't as ideal as her long-term relationship with her controlling fiancé Charles has hit a dry spell.
When Lark is called home to Oregon for her father's funeral, she comes face to face with the demons from her past, but she never expects to meet her dream lover in the flesh. Niall O'Hagan steps straight out of her fantasies and into her life, and the powerful connection they share rocks her foundation. Although she's dealing with the bitterness of her fiancé's betrayal and his jealousy, Niall soon stirs Lark's awareness of her superficial existence and reawakens her sexuality....and her soul.
EXCERPT:

“This time?” He lifted an eyebrow, perplexed. “You’ll have to forgive me, lass, but I’ve no idea what the devil you’re talking about.” He maneuvered himself off her and sat upright at the end of the swing.
She tucked her feet against her, sat up, and blinked at him in utter disbelief.
“I came to knock on the door when I saw you on the swing. You tossed and turned, and with the way you grunted, I assumed you were in the middle of some sort of a seizure.”
He turned his head and licked his lips, full and abused by her kisses. A mushroom cloud of mortification bloomed inside her, steadily bigger by the minute.
“Erm, you…begged me to kiss you, and then you yanked me down. One thing led to another and, well, that was pretty much the way of it. I am only human, though I know it’s no excuse.” He swallowed and stared at her, his Adam’s apple moving in his throat. “I apologize. I shouldn’t have gone down when you pulled me, but it was strange—like you knew me or something.”
Lark leaned forward and rubbed her eyes. This couldn’t be real. He had to be a hallucination. When she opened her eyes, she’d see a man in his fifties with a receding hairline, glasses, and a beer gut. She reopened her eyes, and there he was: The full package. In the flesh. He was impossibly sexy, and an air of intelligence graced his eyes as he scrutinized her. She planted her feet on the porch, then put a hand to her head. The vertigo from earlier returned. “No, I’m sorry. I was dreaming…”
“Excuse me for saying so, but it must’ve been one hell of a dream.”
Lark nodded and tried not to black out as a wave of dizziness came over her.
“You look like you’re dehydrated. Hold on.”
The lilt of his familiar Irish accent soothed her like warm milk. He stood and walked over to a black laptop case propped near the front door that had several thick manila folders sticking out of its open center. One read BRAITHWAITE in large, capital letters on an index label. He crouched, unzipped the front pocket, and extracted an unopened plastic water bottle.
He unscrewed the cap and held the bottle out to her. “Here.”
“Thanks.” She accepted the bottle and took a long sip. The cold water instantly revived her. She wiped a drop off the corner of her mouth with the top of her knuckle as he watched. She offered the bottle back to him, but he shook his head and reclaimed his seat next to her.
“Keep it. Drink.” 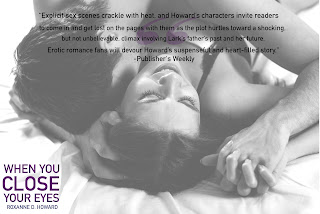 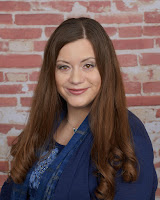 Roxanne D. Howard is a U.S. Army veteran who has a bachelor's degree in Psychology and English. She loves to read poetry, classical literature, and Stephen King. Also, she is an avid Star Wars fan, musical theater nut, and marine biology geek. Roxanne resides in the western U.S., and when she's not writing, she enjoys spending time with her husband and children. Roxanne loves to hear from her readers, and encourages you to contact her via her website and social media.

a Rafflecopter giveaway
at November 29, 2019