Book Blitz for The Rule by Maggie Cole (GIVEAWAY)

A strong-willed woman who follows the rules finds herself in a combustible relationship with a billionaire who’s accustomed to getting everything he wants in this series starter.  Keep reading to get a tempting taste of The Rule by Maggie Cole, then add it to your bookshelf.  In honor of this first installment in the All In series make sure to fill out the form below for the chance to win a $5 Amazon GC too! 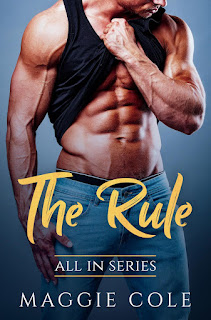 She’s got one rule: no dating clients. Too bad he doesn’t follow the rules.
When Liv White meets billionaire Tom Marko, she’s about to take over his companies—but he wants her over him…and under him. (And everything in between.) It doesn’t hurt that Tom’s handsome, a basketball star with a body to match, and just the right kind of fierce.
What’s a whip-smart businesswoman to do
Tom gives Liv an ultimatum: the deal’s off unless they use his Colorado mountain home for their next meeting. Despite her rule, Liv agrees. The truth is, she doesn’t know if she can resist Tom’s presence—or the feel of his hands on her.
Just as the hunger between them becomes impossible to ignore, Tom’s past comes crashing back. The two are thrust into danger, and Tom and Liv must fight to keep their lives—and each other.

He laughed with me. Then he swallowed hard and just stared at me, with his eyes begging me to want him.
I’m not sure how long he stared, and I fought with my rule, but finally, I gave in. There was something so irresistible about him, and I couldn’t help myself.
I slowly leaned closer. It was all he needed. This time I didn’t duck out of it. I knew what he was going to do, and I let him because I had to have it too.
Our mouths met, and our tongues explored the others. A jolt hummed through my body.
Tom Marko had to be the world’s sexiest kisser. I was sure of it. Every inch of my body lit up with electricity, as his lips parted mine and his tongue sent shivers down my spine.
He effortlessly rolled me on top of him and pulled me close to his body. I dug my knees into the cold ground on both sides of him, as I tried to get even closer, kissing him harder, as his body started to respond to mine through our clothes.
Strong arms wrapped tighter around me, while hands caressed my back, sending tingles down my spine. As I ground my sex into his, I rubbed my hands through his hair and pushed his black hat off his head, and listened to his sexy groan.
The energy of his body heat vibrated against me, but I suddenly got a chill, and my body shook from the cold.
Tom pulled me away and sat up. “Time to get you out of those wet clothes.”
A surge of excitement ran through me.
Tom pointed to a free-standing stone building that I hadn’t noticed before.
“There is a wet sauna and shower in there. Dry sauna, too, if you want. Robes, towels, whatever you need. It’s all in there. I’ll stay out here, in case you need anything.”
Crap. He wasn’t going to undress me. Damn it!
Apparently, my rule flew out the door.
“Aren’t you cold?” I asked him guiltily. He had to be freezing. I started to cool down from the run and now felt my bones turning into ice. “I’ll be all right. I’ll go by the fire and wait. You go get warm. I don’t want you to get sick.” Tom put his hand around my waist and guided me past the fire I hadn't noticed.
He opened the door, and I stepped into the sauna. It was warm, and steam shot out of the ceiling and floor. There were several seats, all different heights.
I turned back to him. I felt guilty and wanted to invite him in, but I wasn’t sure what to do.
“Get warm, Liv.” He shut the door.
I removed my shoes and socks, shirt, and pants, and walked to the adjacent shower. It was warm, but I was freezing from the ground, and my clothes were all covered in mud. As the water got hotter, I stood in my bra and underwear, and let the mud wash off.
The hot water was a welcome relief, and I thought of Tom, standing out in the freezing-cold.
Guilt once again rushed through me. But even stronger was the deep desire I couldn’t shake. Thoughts raced through my head.
Tom's perfect body that screamed sex god.
The business empire he built based on his brain that made him even sexier.
The kiss we shared that was the hottest kiss I had ever experienced.
The hardness of his manhood against my body...a body that hadn't been touched in I didn't know how long.
The house he designed from the ground up and how he paid attention to every little detail...
He had to be an attentive lover.
Who was I kidding? I bet he was an incredible lover.
I realized how much I wanted this man. I craved him. Since the moment I met him, I had been off-guard, nervous, excited, and curious. He was so much more than I thought, and I knew I had only scratched the surface of who he was.
Meg’s words rushed to my head. “Your client rule is super old school, and you need to let it go.”
I couldn’t help myself. I had to have him.
I opened Pandora’s box. 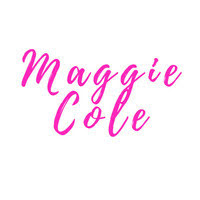 Maggie Cole is the pen name of a multi-faceted woman. She's an entrepreneur at heart and loves writing contemporary steamy romance novels. Her books will make you feel lots of different emotions. Sometimes you'll laugh, sometimes you'll cry, sometimes you'll have little flutters racing through your veins...and that's Maggie's biggest wish for you when you read her novels.
She's a wife, mother, and lives in the sunshine, where she can often be found staring off into space while creating new scenes in her mind.

a Rafflecopter giveaway
at November 18, 2019