A hockey player struggling with the death of his fiancée hits rock bottom and is left with an ultimatum that will change his life irrevocably in this emotionally intense tale of starting over.  Keep reading to get a tempting taste of Tacker by Sawyer Bennett, along with my impressions of it, then add this fifth installment in the Arizona Vengeance series to your bookshelf. 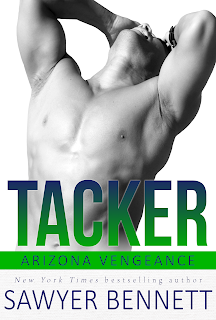 Fifteen months ago, my life was turned upside down when the plane I was piloting went down. Injured and trapped in the wreckage, I had to watch my fiancée die a painfully slow death, which is something that can really mess with your head.
Since that day, I’ve had little desire to do much of anything. Except play hockey, that is. Because that is the one place where the bad memories are banished and I can escape my pain.
But off the ice, I’m spiraling out of control. Losing the grip on my life and putting myself and my career in danger. Now, thanks to a string of bad decisions, I’ve been ordered to complete therapy in order to stay on the team.
The problem? Nora Wayne, my beautiful and somewhat unconventional therapist. I can’t buy into the brand of happy clappy crap this woman is feeding me. What could she possibly understand about the type of loss that I’ve suffered? How does she know anything about finding happiness after losing the most important person in your life?
Turns out, I’ve got a lot to learn, and she’s just the person I need to break through those walls I’ve erected.
I am not okay.
But for the first time in a long time, I know that I will be. 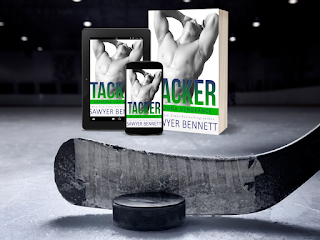 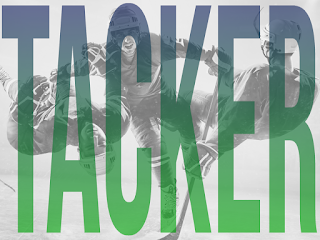 Tacker Hall has been on my mind since the first installment in this series introduced him to us, a man weighed down by grief over the death of his fiancée in a plane crash.  His grief was compounded by the fact that he was piloting the plane and had to watch helplessly while she died when help was slow to arrive.  Everything came to a head recently though with him deliberately driving his vehicle into a cement barrier while drunk.  The fallout from that event is what drives this tale and filled my emotional cup to overflowing as a therapist with her own painful past helps him find peace while giving him a reason to start over.

From the start Tacker’s a truly likable character whose grief is palpable, as he hurt so did I.  It’s clear that he’s not coping well though, separating himself from his best friend and teammates to wrap himself up in a blanket of guilt and sadness.  The ultimatum from management to stay with the team may seem cruel at first but it’s just what he needs to get him to embrace life and love again.  Tacker’s quiet when we first meet him, rarely cracking a smile, on edge and ready to blow. Management forcing him into therapy forces him to start talking about things and gets him to stop hating himself for surviving.  When it came to therapy though it took an unconventional woman to break down his barriers and doing so had them making a surprising connection that warmed my heart.  Therapy had him bonding with Nora as friends first, had him reaching out to her to help make things easier on her ranch. Attraction snuck up on him and had him doing and saying sweet things before turning up the heat in their slow burn romance that put a smile on my face.

Nora Wayne’s had her own painful past as a young girl caught up in the war in Kosovo, watching her family be murdered and her sister raped, with her finally escaping when a caring woman adopts her and brings her back to America.  Years of therapy have turned her into someone that’s inspiring.  Instead of rage she’s a breath of fresh air, always looking on the bright side while pushing Tacker to do the same.  Her methods may seem hippy-dippy but the results had me cheering. Nora’s a kindhearted character, always worrying about others first, and it took her gentle hand and bright personality to bring Tacker out of his dark feelings.  I liked her and she fit in beautifully with the player’s significant others courtesy of her down to earth nature.  I especially enjoyed her interactions with her ranch’s long-term employee, Raul.  He was a friend and a father to her and seemed to be the only one in her life until Tacker and his teammates came into the picture.  The attraction between her and Tacker was slow to develop but very worth the wait as it was a powerful connection that grabbed my heart and didn’t let go.

From the first page to the last this was a straightforward story of overcoming the past to make a fresh start.  There was virtually no angst to get in the way of  Nora and Tacker making a connection and from me rooting for them every step of the way.  It was a relationship both sweet and sexy and it had my emotions running the gamut.  At times though I felt things were almost moving too slowly which made the earlier part of this story a bit draggy.  Surrounding this unforgettable couple were the men and women of the Arizona Vengeance, a group who have come to feel like family.  They’re supportive of Tacker from the start but unafraid in calling him out on his behavior that’s been detrimental to the team.  I enjoyed getting updates on past couples, particularly Blue and Erik with her disabled brother, as well as Dominik’s attraction to Dax’s sister which will likely take center stage in the next installment.  I also found myself drawn to Tacker’s best friend, Aaron, his new teammate who’s popular with the ladies but who showed a kinder side when learning about Nora’s past.  On a whole this was another winner from Ms. Bennett and it has me counting down the days until we rejoin the Vengeance on the ice and off! 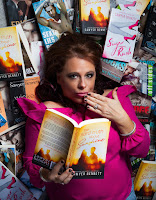