Readers will be drawn to this story of a man, whose life has never gone as he hoped, who finds himself back in his childhood home and reconnecting with the one woman who’s always taken him as he is.  Keep reading to get a tempting taste of Never Enough by Kristina M. Sanchez, learn even more about this book by visiting the other sites hosting this tour, then start counting down the days until it hits shelves on July 6th.  In honor of this upcoming tale of second chances make sure to fill out the form below for the chance to win a $20 bookstore GC too! 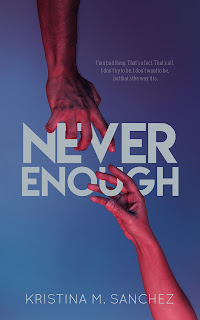 At thirty-seven, Valentin Belmonte returned to his mother’s house with his tail between his legs. No surprise there. His life had been a long line of bad choices, failures, and trouble. Also returning home, freshly graduated and on the hunt for a job, was Mina Toussaint, the orphan Val’s mother and stepfather had taken in when he was already grown. She’d been the only person who’d ever really liked him, but he’d screwed that up a long time ago.
Mina’s adoptive family had treated her like the perfect princess and little girl they always wanted. Val was the only one who’d ever seen her for who she really was; she’d never wanted to be a princess. But after what happened when she was sixteen, she thought she hated him. Now, six years later, things were different. She wasn’t the child she’d been when she got so angry. The trouble was that Val hadn’t changed. He still saw her.

Kristina M. Sanchez began her life-long love of writing as a small, insomniac child, making up stories about Bugs Bunny to occupy herself when everyone in the house was asleep. She lives now in Southern California with two cats and an enchanting hurricane—err—toddler. An enchanting, smarty-pants, bewildering toddler. Kristina is an asexual, happily single mother by choice. You might think that’s a weird kind of person to be writing romance novels, but the best science-fiction writers have never been to space, so there you go.