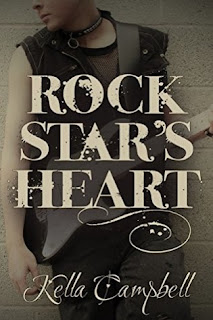 When a twist of fate throws university student Crys Murphy into an unexpected job on tour with a wildly successful rock band, her crush on the guitarist turns into powerful temptation. But there’s a dark side to the glamour and champagne: Blade has anger and addiction issues, a history of partying with groupies, and a tendency to get naked in public — and Crys is supposed to keep him out of trouble.
As she gets to know the talented and lonely man behind the bad boy behavior, the chemistry between them wavers on the edge of something deeper. But he doesn’t do relationships, and she grew up expecting a white-picket-fence future. Can he reform and open his heart to love? Will she give up her straitlaced upbringing for her troubled rock star?

When it comes to romances set in the rock star world, I can never seem to get enough.  They're my addiction, and with this new-to-me author's series starter, it's a satisfying addition to my bookshelf.  It's a heavy read at times though as it realistically deals with addiction as the young woman hired to watch over the rocker trying to overcome his issues starts falling for him at the same time.

Crys Murphy is a bit naive when readers first meet her, very sexually curious, and a bit clueless in many other ways.  The first chapter of this book certainly doesn't help my impressions of her either as it highlights her naïveté and shows her profiling every male she meets in terms of their sexuality.  She's clearly drawn to the members of rock band Smidge and when fate intervenes she ends up joining their tour as the fake girlfriend and caretaker to recovering addict Blade.  She's immediately attracted to him and is willing to do whatever to keep him clean, willing to sacrifice her self-esteem at times to help him stay sober.  While I understand how desperate she was to help him, both out of her burgeoning love for him and in her role as caretaker, I wish she'd had more of a backbone from the very start in her dealings with him.  Her actions often left me conflicted and it wasn't until very late in the story that I came around to liking her as she finally stood her ground with him and put her desires first which pushed him to be better.

Blade is a talented guitarist who wholeheartedly lives and breathes the rock star's lifestyle.  The public sees him as the leather-wearing, eyelined, rock god but behind the scenes he's a mess.  His heroin addiction is getting worse, as are his anger issues that are the result of a very painful past.  Once the public sees how out of control he's become though is the moment Crys comes into his life in an attempt to save him from himself and keep the band going.  Blade is a complicated man who's become overwhelmed by fame, weighed down by obligations, and it made me ache for him.  He didn't always treat Crys well though and it was those moments where the price of his addiction was most notable.  Other moments showed him to be a loving and caring man encouraging Crys to reach for her dreams and it's here that I too fell for him.  His journey is a difficult one, not at all sugarcoated by Ms Campbell, and it often pulled at my heartstrings in a tale full of emotional highs and lows.

After a very rocky start with an opening chapter littered with disposable characters and questionable actions this story finally came into its own.  With an imperfect main couple made better through their growing connection to each other, readers will become fully entrenched in this couple's journey to HFN, an ending that I wish had been more fully fleshed out.  The world of addiction was vividly depicted as was the glitz and glamour of the rock star world to pull readers into every facet of these character's lives.  Along with an unforgettable main couple was a cast of secondary characters, the other members of Smidge notably, and I look forward to reading more about them (and getting a more satisfying ending to Crys and Blade's HFN) in the future.

My rating for this is B-

*I got this book from the author for review in exchange for my honest opinion.
at June 25, 2020