A road trip full of familial obligations turns into a rescue mission after a bride discovers her groom’s infidelity and with each new mile on the odometer two friends are brought closer together.  Keep reading to get a tempting taste of Game Changer by Kelly Jamieson, along with my impressions of this sweet and sizzling tale, then add this fifth installment in the Wynn Hockey series to your bookshelf! 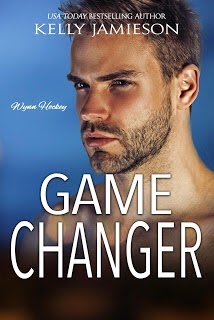 Jackson Wynn
I don't want anything to do with my crazy family's drama, which I've been watching unfold from a distance over the last year, but now my grandfather has Alzheimer's and I feel I need to at least make a quick visit to see him. My hockey season's over, all I have to do is get through my teammate Steve's wedding, and then I'm on a plane to Los Angeles to do my family duty. After that, I'll head home to Manitoba for some summer R&R at the family lake cottage.
Molly Flynn
Nobody's expecting what happens at my wedding, which becomes pandemonium. I need to get out of there. Fast. Who do I turn to? Jackson Wynn, one my fiancé's teammates. He's been a friend to me since I met Steve. For one night, we hide out in his condo, but he's leaving in the morning for California. I want to go with him.
Jackson
I can't take Steve's fiancée with me to California. He's going to flip shit over this. But the lying cheating bastard kind of deserves it, and I've always had a soft spot for Molly. Or maybe not so soft...because she's not only sweet and kind, she's hot as hell. This is a bad idea for so many reasons, and I sure as hell don't need more drama in my life, but I can't say no to her.
On this nutso trip, neither of us expect Molly to bond with my bonkers family...especially my poor, confused grandpa. And neither of us expect to bond with each other. 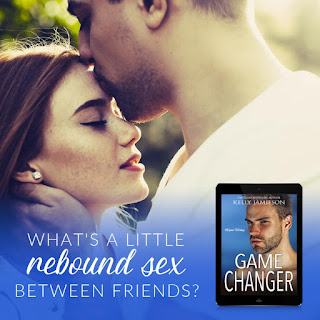 Readers looking for a quintessential summer read will find this just what they're hoping for courtesy of a wonderful hero with a hidden heart of gold, a sassy heroine who just dodged a bullet, and a road trip that has these friends slowly becoming something more as secrets and truths are revealed.  It's a journey that might start out as an escape from a wedding but it soon turns introspective as the stoic hero starts dealing with his past with the help of the very likable heroine.  From start to finish readers will be charmed, truths will be laid bare, and readers will be cheering on this main couple every step of the way in this gem of a romance!

Jaxson Wynn is a man full of inner conflict as family choices, when it came to romance, have left him doubting the existence of true love.  His father and grandfather's choices disillusioned him and have kept a rift between them throughout the years.  His grandfather's recent Alzheimer's diagnosis is something he can't ignore though and it has Jax heading home before it's too late.  To the outside world he's content with his hockey playing life, content with trivia night with his friend Molly, but throughout their road trip it's clear there's something missing...and with Molly by his side he'll discover what that something is.  Jax is a good guy, someone who wouldn't go after his friend's girl, and through most of their trip their feelings are kept as a slow-burn danced around by both of them.  Throughout that time he also addresses his own past, his lack of believing in love, and learns the truth about the divorce of his parents...all with Molly by his side supporting him.  Their love of trivia brought them together but the more time they spent on the road the more they discovered about themselves and each other with each mile making me like them all the more. Jaxson endeared himself to me from the very start by being a good friend to Molly when she needed him most and by the end their pairing put a permanent grin on my face.

Molly Flynn's a likable heroine, a teacher with a good head on her shoulders.  She thought she'd found the love of her life but the night before her wedding proves just how wrong she is.  Wanting to nurse a bruised heart, while staying away from all the drama, means running from the altar and begging her friend Jaxson to take her with him on a road trip to see family.  The journey takes a few unexpected turns though as emotional issues are dealt with while their growing feelings for each other soon become too obvious to ignore.  Molly's the kind of heroine you can see yourself hanging out with and she fit in equally well with the Wynn family which helped Jaxson confront his long-held beliefs and feelings of inadequacy.  She proved herself to be a supportive friend which in turn fueled their romance and it had me rooting for them every step of the way.

From the first page to the last I was utterly charmed by this friends to lovers romance.  There were some typical Ms. Jamieson moments, while also forging some new roads, in a tale that was a nice addition to the Wynn Hockey series.  The romance between Molly and Jaxson was definitely a slow burn, something that grew with each mile they traveled, and I enjoyed how it just snuck up on them.  It was a gift they weren't expecting and it came with a few bumps before they fully embraced the change between them.  Previous books were fueled by action on the ice in exhilarating games of hockey, but here the action was more personal during the sport's off-season.  My only quibble comes with a midsection that dragged a bit, but it thankfully didn't last long and led to even more soul searching between the two likable leads. Readers will enjoy this sweet and sensual friends to lovers tale, a tale that will have them wanting to get caught up with the previous books while waiting to return to these characters who've come to feel like family. 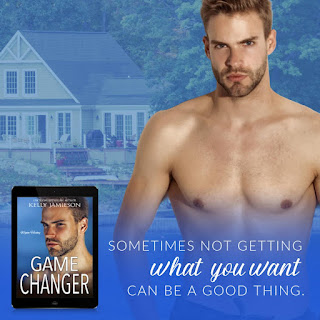 Kelly Jamison is a USA Today bestselling author of over 40 romance novels and novellas.
Her writing has been described as “emotionally complex”, “sweet and satisfying” and “blisteringly sexy”. She likes black coffee, white wine and high heels...and of course cheering on her Winnipeg Jets during hockey season!