Book Tour for A Scot to Wed ​by Callie Hutton (GIVEAWAY)

A woman with nowhere else to go settles on land already claimed by another in this combustible historical romance.  Keep reading to get a tempting taste of A Scot to Wed by Callie Hutton, then add it to your bookshelf.  In honor of this second installment in the Scottish Hearts series make sure to fill out the form below for the chance to win a $25 Amazon too! 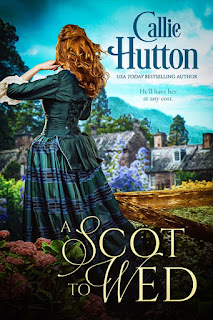 HE’LL HAVE HER AT ANY COST.
Highlander Laird Evan MacNeil cannot believe Mistress Katie Sterling just shows up at the MacDuff castle with this faded piece of parchment laying claim to the lands he just legally inherited. Not that he really wants to be here in the lowlands, but he has responsibilities to his clan and the exasperating Katie has uprooted the remnants of her father’s clan and moved them across the country to live here. There’s no way he can leave to go back home now.
Katie has nowhere else to go and she refuses to bow down to the arrogant yet undeniably handsome Highlander. She’s had enough with men trying to control her and she is quite capable of handling herself.
Now that Evan must spar with a beautiful lass for the rights to the lands, he will fight to the end. This battle is nothing like the ones his ancestors fought with crossbows and boiling oil. They never wanted to bed the enemy.

“Stop grinning like a loon, brother. The lass is still a stranger to us, and we need to watch ourselves around her."
“What?” Alasdair had the nerve to laugh. “If ever there was an uncomplicated lass, it’s that one.” He motioned with his thumb toward the ceiling.
“And what do ye ken of complicated lasses? Most of yer bed partners have no more brains than that goat.” He waved his cup in the direction of the animal standing in the library doorway. He dropped his coffee cup and jumped up “What the hell is that?"
Alasdair turned in his chair. “I think ye already said it. Appears to be a goat."
The animal stared at him, then ambled into the room. “What the blasted hell is a goat doing in the house?"
“Oh, so sorry, my laird.” Meggie rushed in after the animal. “I’ll take him outside."
“Is he one of the tenant’s goats?” Evan asked as the animal walked farther into the room, looking around like he owned the place.
Meggie grabbed the animal around the neck. “Nay. He is Agnes’s pet goat, Myrtle.” “The wee lass?” He thought he remembered her name as Agnes.
“Aye.” She tugged. The animal refused to move.
“Her pet goat?” he repeated.
“Aye. She keeps him in her cottage, and he sleeps alongside her.” She walked around the goat and attempted to push him forward.
Evan looked over at Alasdair. “He sleeps alongside her in her cottage."
His fool brother was laughing so hard, he couldn’t speak. This day was certainly not going the way he’d planned. First, Stirling clan members had arrived before he expected them, the interviews he and Mistress Stirling were conducting had been cut short, and now there was a sick lass upstairs, and her pet goat was munching on one of his books. “God’s toes!”
Evan glared at a red-faced Meggie. “Get the blasted animal out of here and outside. Find MacDuff and have him put the thing somewhere."
As Meggie tugged and, in turn, pushed on the animal, who had decided he wanted to stay right where he was, Mistress Stirling hustled into the room. “Oh, there he is."
Evan scowled at her. “Mistress, ye new arrival brought a pet goat with them.” “Aye. I ken. Wee Agnes wants him to join her upstairs."
“Upstairs? Where the bedchambers are?” He hadn’t realized how loud his voice had become until Meggie—still pulling on the goat—and Mistress Stirling both cringed.
“’Twill calm the lass down,” Mistress Stirling was brave enough to mumble, avoiding his eyes.
“Let the bairn have her pet, Brother,” Alasdair added, wiping the tears from his eyes. “If it makes her feel better, it cannot cause harm."
“Cause harm? The thing was eating one of my books.” He picked up the tome and waved it at the group who all stood staring at him, expressions from uneasiness to laughter on their faces. He rubbed his eyes with his fists. “Verra well. Let the lass have her animal.” He pointed a finger at Mistress Stirling. “The minute the wee one falls asleep, I want that animal out of the castle and to the barn, where it will stay. Do ye understand?"
“Aye.” Mistress Stirling said something in the goat’s ear, and the blasted animal walked alongside her as easy as ye please. Evan glared at his brother, who choked on his laugh. 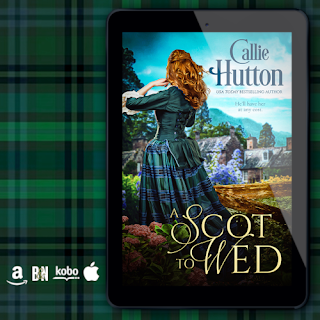 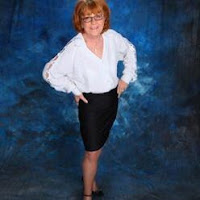 CALLIE HUTTON, USA Today bestselling author writes both Western Historical and Regency romance with “historic elements and sensory details” (The Romance Reviews). Callie lives in Oklahoma with several rescue dogs, two adult children, a daughter-in-law, twin grandsons and her top cheerleader husband (although thankfully not all in the same home!). Living in the Midwest provides plenty of opportunities for Callie do pursue her interests: researching history, meeting readers, spending time with her adorable two year old twin grandsons, and discovering new adventures. Callie loves to hear from readers and welcomes the opportunity to become friends, both in person or virtually.