As a fan of sports romance I was immediately drawn to this series starter and its friends to lovers theme that's among my favorites.  Keep reading to get a tempting taste of Take The Shot by Danica Flynn, along with my impressions of it, then discover even more about this book by visiting the other sites hosting this tour.  In honor of this first installment in the Philadelphia Bulldogs series, and while waiting for it to release on June 9th, make sure to fill out the form below for the chance to win a $25 Amazon GC too! 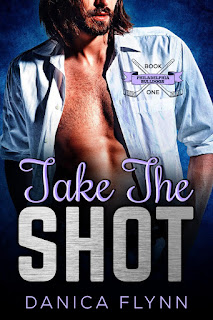 DINAH
When my husband died, I never thought I would find love again.
I definitely didn’t think I would find it in the arms of my younger best friend. Why would the hunky hockey player want anything to do with me? I’m a stressed out writer with a lot of baggage. Any other man would say, “HARD PASS!"
But Noah was the best man I’ve ever known, and if it wasn’t for him, I might not be alive.
But am I ready to put my heart on the line again?
NOAH
I’ve pined for my best friend for so long, that my teammates issued an ultimatum.
“Make your move now or one of us will ask her out."
They are just trying to push me, besides none of those jerks would ever be good enough for her. Makes me wonder if I even stand a chance.
Besides, what would a smart woman like her want with a dumb jock like me?

I was first drawn to this book because of its theme of friends to lovers, it being set in the sports world, and involving an older woman/younger man and I started this book with lots of happy anticipation.  With each turn of the page I found moments that put a smile on my face but there was lots of frustration too.

Dinah's been through the emotional wringer in her past with the death of her husband in a car accident, along with having a miscarriage, and my heart ached for her over her losses and the fear she's left with in trying to make it on her own.  They're losses that she's slowly starting to move on from though.  Luckily she has a sweet and dependable neighbor she's always been able to count on and the two of them have been dancing around their feelings for each other over the last two years.  On a whole Dinah was a realistic heroine with fears and doubts resulting from her tragedies.  I liked her interactions with her neighbor Noah, though sometimes there were moments of awkwardness and times she treated him like a little boy instead of a potential lover.  Dinah has major issues with the age difference between her and Noah too and it became a repetitive concern that dimmed the joy of her finding a new love for me.  The age difference wasn't even that much...8 years...with both of them over 21.  Even though she was older there were times where her dialogue felt like a teenager's words with the constant use of "dude".  I don't know if she was trying to be hip, but it became cringeworthy and became less frequent as the story progressed.

Noah's a nice guy with a good heart, a sexy hockey player with a bright future.  He was drawn to Dinah from the very start but respected the boundaries of her being a widow and his neighbor.  He wants her though and is constantly getting a push about it from his teammates, a push he desperately needs as fear and uncertainties will forever hold him back otherwise.  It's a slow journey for them to finally becoming more than friends, a repetitive journey of an inner war with himself, and I was rooting for him every step of the way as I enjoyed these two together. They weren't a perfect couple in their presentation, but I feel that they will grow beautifully together.


This is Ms. Flynn's debut novel...and it shows with a story that's a bit rough around the edges.  Noah's a sweet and sexy hero but talks like a teenager at times.  When it came to intimacy with Dinah he was over the top in getting consent from her which pulled me out of the moment and made him seem as if he didn't know what he was doing.  Dinah's dialogue was also rough and seemed to come from someone much younger and belied the strong businesswoman she was supposed to be. The hockey world presented here was realistically depicted with serious issues (like concussions) on display along with seeing the team not always win.  I also enjoyed the glimpses of the other Philadelphia Bulldogs and their appearances give me great hope for the next installment in this series as Ms. Flynn's career evolves.

Danica Flynn started writing at an early age, and thinks Meg Cabot's Princess Diaries series is why she loves both writing and romance books. She is a rabid hockey fan of both The Philadelphia Flyers and the Metropolitan Riveters. When not writing, she can be found hanging with her partner, playing video games, and reading a ton of books.