Book Tour for Catch Me When I Fall by A.L. Jackson (Review & GIVEAWAY)

A forbidden one-night stand has big ramifications for the lead singer of a band on the cusp of fame and the man who hopes to sign them to his record label in this emotionally intense romance.  Keep reading to get a tempting taste of Catch Me When I Fall by A.L. Jackson, along with my impressions of it, then add it to your bookshelf.  In honor of this second installment in the Falling Stars series make sure to fill out the form below for the chance to win a signed print copy of Kiss the Stars as well as a $50 GC too! 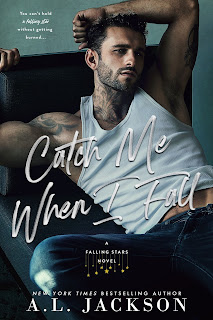 Sometimes trying to catch a star will light your whole world on fire...
Emily’s entire existence was wrapped up in touring with her country-rock band Carolina George.
What she never expected was to spend a passionate night with a gorgeous, tattooed stranger.
Their chemistry was combustible. Their attraction irresistible.
It was never supposed to follow her into the light of day.
Royce’s night with the lead singer of Carolina George was the worst mistake of his life. He needs the band to sign on to his record label or his family will pay the price.
He knows falling for her will threaten his carefully laid plans.
Royce’s past is littered with mistakes and heartache—will he overcome or will his love for Emily just be one more tragedy... 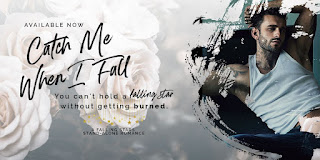 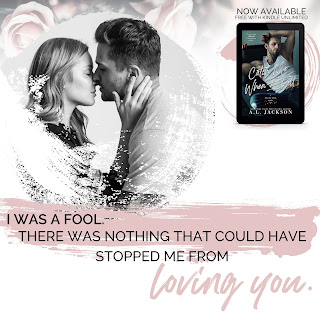 I love romances where the main couple has to work for their HEA, where there's a bit of angst and some pulling of the heartstrings.  From the moment I started this book the emotions were definitely running high, the chemistry palpable between two people with painful pasts that are slowly revealed throughout the story.  With each turn of the page I was captivated by the journey these two took together, a journey that made them stronger as the story progressed.

Royce Reilly, like many of Ms. Jackson's heroes, is a delicious contradiction.  He's a brooding, tatted-up, sexy, caring, and oh so supportive man with an air of mystery surrounding him.  He's a man on a mission at the start of the story, but what that mission truly is isn't made clear until the final chapter and until then I was on the edge of my seat.  Meeting country crooner Emily threw him a bit off his game plan though and it left him conflicted as his heart became more and more involved.  Royce's past was a heartbreaking one and it fueled his motivations at every turn, sometimes had him not being fully transparent with Emily, but her safety and his support of her was vital to him.  They were absolutely combustible together with every interaction teeming with sensuality and it had me blushing a time or two in this tale that I never wanted to end.

Emily Ramsey is lead singer of country band Carolina George and though she tries to put on an air of being content and in control, she's actually anything but with her past starting to weigh on her future.  It's a past that still haunts her and is one that she fears will rear its ugly head at any moment.  She's reached her breaking point though, but just when she hits bottom there's Royce.  Though she knows she shouldn't be attracted to him she can't help herself and it led to numerous sizzling encounters that kept me voraciously turning the pages.  Emily's an appealing heroine, tough with a big heart but a bit bruised, and through each subtle word and deed Royce helps her to heal.  Together they built each other up, made each other better, in a journey that had me rooting for them every step of the way.

From the first page to the last this was a story about revenge and second chances, a building up after reaching some very emotional lows, and it captivated me.  The hero was a compelling dichotomy who readers weren't always sure about but by the end it's more than clear whose side he's on.  The pace of this story was well-crafted with an important reveal presented at the end after a trail of storyline breadcrumbs to keep readers wanting more.  The life of a musician was realistically depicted too, with the chaos and glamour of being on stage balanced with the peace and normality of being home.  I enjoyed getting to know more about each bandmate, the familial vibe between each, and I hope to see more books based in this world.  Those looking for a romance full of heart and soul, with a bit of intrigue and angst, will be thanking Ms. Jackson for another beautifully crafted story and another unforgettable main couple.

A.L. Jackson is the New York Times & USA Today Bestselling author of contemporary romance. She writes emotional, sexy, heart-filled stories about boys who usually like to be a little bit bad.
Her bestselling series include THE REGRET SERIES, CLOSER TO YOU, BLEEDING STARS, FIGHT FOR ME, CONFESSIONS OF THE HEART, and FALLING STARS novels. Watch out for her upcoming stand-alone, CATCH ME WHEN I FALL, on Amazon and free with Kindle Unlimited!
If she’s not writing, you can find her hanging out by the pool with her family, sipping cocktails with her friends, or of course with her nose buried in a book.
Be sure not to miss new releases and sales from A.L. Jackson - Sign up to receive her newsletter HERE or text “aljackson” to 33222 to receive short but sweet updates on all the important news.