Book Tour for Sisters and Secrets ​by Jennifer Ryan (GIVEAWAY)

Readers will find themselves quickly caught up in this emotionally intense tale of sisterhood, secrets, and second chances that will take you on a rollercoaster ride set in a small town.  Keep reading to get a tempting taste of Sisters and Secrets ​by Jennifer Ryan, then add it to your bookshelf.  In honor of this standalone romance make sure to fill out the form below for the chance to win a print copy of this book along with another classic title from this author too! 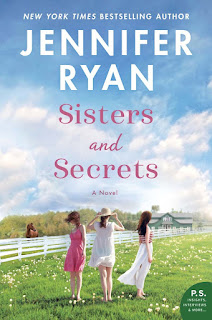 There’s nothing more complicated than the relationship among family...Especially when the Silva Sisters are keeping secrets.
For Sierra it means returning home with her two little boys after a devastating Napa wildfire takes her home, her job, and even the last mementos of her late husband, David. Determined to start over, how can she ever reveal the truth—that her husband may have led a double life?
To the world, Amy’s world is perfect: handsome husband, delightful children, an Instagram-worthy home. But behind this facade lies an awful truth: her marriage is rocky, her children resentful, her home on the verge of breaking up.
Heather, impulsive, free-spirited, and single mom to an adorable little girl, lives for the moment wearing a carefree smile. But she refuses to reveal the truth about her daughter’s father, and his identity remains a mystery even to her family.
As the Silva Sisters secrets are revealed, each realizes that there is more to their family than meets the eyes...and forgiveness may be the only way to move forward and reclaim true happiness at last. 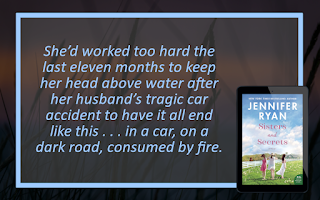 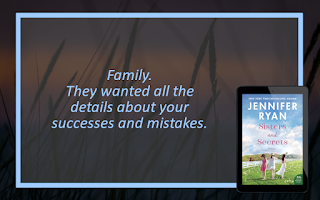 NY Times & ​USA Today bestselling author ​JENNIFER RYAN writes suspenseful contemporary romances about everyday people who do extraordinary things. Her deeply emotional love stories are filled with high stakes and higher drama, love, family, friendship, and the happily-ever-after we all hope to find. Jennifer lives in the San Francisco Bay Area with her husband and three children. When she finally leaves those fictional worlds, you’ll find her in the garden, playing in the dirt and daydreaming about people who live only in her head, until she puts them on paper.