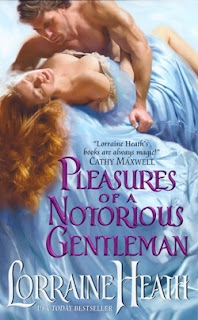 Unlike his brothers, Stephen Lyons is the middle son with no title.  He's always felt lacking because of this and that his life is unimportant.  Since he can't be the talk of the town for his title, he chooses to be known for his prowess in the bedroom.  After an ill-conceived plan to help his soon-to-be sister-in-law on her wedding night causes a rift between him and his family, Stephen decides it's time to grow up and goes to fight in the war in the Crimea.  While there, his popularity with the women continues as every nurse falls in love with him as he charms them all.  For his prowess on the battlefield he gains his own regiment and the respect of his men.  He finally feels a sense of importance and pride which comes to a tragic end as he's hit in the head by a cannonball that leaves him scarred, lame, along with the loss of two years worth of his memory.

Mercy Dawson wishes she could forget about events that occurred in the Crimea.  From the suffering of the soldiers to the horrors that befell her one night in an alley, Mercy comes to London to makes a fresh start and honor the one man to comfort her in her hour of need.  Mercy's not alone though, she brings with her a son who she wants to present to Stephen's family.  Believing Stephen to be dead, she feels it's only right that the family have his son to remember him by.  Expecting to be nothing more than the boy's nanny, she's shocked by the very much alive Stephen and his desire for her to stay with him to help him recover from his injuries and regain his memory.  As Stephen pushes her to help him remember the past, she pushes him to embrace the future and the life he can have with his son.  As his physical injuries heal, Stephen comes to care for Mercy and admire her strength and bravery and before long the three of them become a family.  The past soon comes back to haunt Mercy and the truth about what happened in the Crimea hurts Stephen more than he ever thought it would.  Will he realize the future is more important than the past before it's too late?  Or will he throw away the one worthwhile thing he's ever had in his life?

Stephen and Mercy are very strong and likable characters.  They've both gone through some terrible traumas and come through it as stronger individuals.  Stephen has grown up a lot from the previous book.  War has hardened him and made him realize that relationships are not a game.  True love can heal and seeing the two of them find happiness in each other's arms brings a tear to your eye and you can't help but root for them to continue building their happy family.  As the second book in London's Greatest Lovers Series it was nice seeing characters from the previous book.  I'm particularly intrigued by Stephen's mother and the romantic relationship she has with a younger man along with her feelings regarding a long-time love.  I would love to see this storyline expanded because the characters in this triangle are so strong and so likable and I yearn for a resolution.  These glimpses we get of the other family members has me very excited for the next installment.  Ainsley's the remaining brother that needs to be tamed and as he's always seen as the one in control, I look forward to seeing him lose control in the next installment in this wonderfully romantic series.