Review for The Bottom Line by Shelley Munro 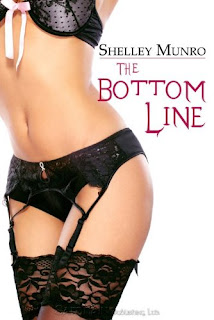 Maggie Drummond has tried to live a quiet life ever since a youthful indiscretion became tabloid fodder.  She's focused on her friends, her job, and her strait-laced boyfriend until the day she decides she'd like to explore the world of spanking.  Her friends are a bit shocked when she confides in them and she breaks up with her boyfriend after he makes her feel dirty for her desires.  Since she knows of no one else into the act of spanking, she starts a blog where she can discuss her desires with others.  Before she knows it, her blog becomes a big hit.  From there her life takes a dramatic turn in which she discovers how strong she really is.

Maggie and her girlfriends have a strong bond, one that they don't think will ever break.  To make sure that they never have a falling out they all agree not to date the lone male that's recently become their friend.  His name is Connor and even though they consider him a playboy because of the numerous blonds he's dated, they enjoy his company and rely on him to give his male perspective.  Since Maggie feels comfortable with Connor, and knows of no one else to try out her new hobby with, she and Connor embark on a friends with benefits exploration of her desires.  Before they know it their relationship takes an unexpected turn that changes everything and everyone around them and forces them to decide how they want their future to be.

This is an intense book about being honest with yourself and living life to the fullest.  It's also about self-esteem and how strongly it affects a person.  Maggie is basically a strong person who's been beaten down by outside forces to where she's been questioning the type of person she is and what would make her happy.  The act of spanking is seen as her taking control of her life.  She's finally taking charge and leading, whereas before she meekly followed.  Maggie is a very likable character who stands on her own two feet and does whatever is necessary to get through life.  No matter what bad thing is thrown at her in this story, and many hardships do befall her, she deals with it through her own strength.  Seeing her come out of her shell during her interludes with Connor are inspiring to see and it makes them a winning couple.  Maggie's the kind of girl you'd like for a friend and that any man would be lucky to date.  Connor too is a very likable character, very sexy, and not quite what people think.  He's been hiding his true feelings about Maggie for a long time and it's sweet and sexy watching him win her over.  Connor's a real guy's guy, but his interactions with the girls are very believable and add an interesting dimension to the group.

My only complaint about the book, and it's a small complaint, is Maggie's friends.  They spout the necessity of truth, keeping secrets told within the group, and sticking together no matter what.  But there are many instances of them doing the exact opposite.  They get mad at Maggie for violating the code regarding Connor, yet they talked about her blog to people at work which led to serious ramifications for Maggie and saw nothing wrong with that.  They were hypocrites who didn't stand by her when she needed them the most and acted like teenagers not letting her sit with them at lunch once they found out about Connor.  I disliked their actions so much that whatever hardships they were having, I felt they deserved.  Maggie definitely deserved better friends and I admired her even more for putting up with them.

This is a story that I thoroughly enjoyed.  It was super sexy and dealt with an alternative lifestyle in a tasteful way that was not over-the-top.  Maggie and Connor's relationship was romantic, yet steamy too.  Their ups-and-downs were believable and leave you rooting for them to reach their happy ending.

My rating for this is a B