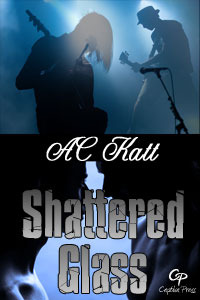 This is a very intense m/m themed book that takes place in the world of rock 'n roll.  It shows the good and the bad side to fame and pulls no punches when showing how it can all go wrong.  For those who can handle the harshness of life, you'll find this an intriguing read with moments you'll love and moments you'll hate.

Sam and Milo have been friends since they were very young.  In a narrow-minded town violently unaccepting of alternative lifestyles, Sam and his brother Rick are the only ones Milo can "come out" to.  To keep Milo's sexual orientation hidden, the boys decide to start a rock band to give Milo a manly persona.  With Sam playing drums, Rick playing bass, and Milo playing lead guitar they set out to find a lead singer and stumble across the new little kid in town.  Liam is six, and since Milo can sense he's gay, the boys bring him in to their circle to keep him safe.  Luckily for them, he's a musical genius who writes amazing lyrics and plays saxophone and keyboard.  With the blessing of his mother Liam becomes the band's new lead singer and thus begins the bumpy travels of Shattered Glass on their rise to fame.  Along the way members of the band have to deal with drug addiction, feelings of jealousy in regards to the music as well as romance, and a blackmailer with a personal vendetta who will do anything to destroy Liam.  Where music once brought these men together, it ultimately tears them apart.  But from the darkest of despair music may once again bring them together and reunite lovers torn apart by a madman.

This book caused a lot of conflicting feelings in me as I was reading it.  My first issue was with Milo knowing Liam was gay at such a young age.  I'm not sure how believable that is since a six year old is still discovering themselves, but it created a bond between them that was the heart of the storyline.  My second issue was with the villain and just how despicable he was with the acts of hatred he committed against Liam.  Those moments were hard to read and very cringe-worthy and somewhat over-the-top.

The characters caused me a lot of irritation in that there was no clearly defined good guy.  Of all the characters, Sam probably comes out looking the best.  He doesn't outright hurt anyone but is definitely guilty of isolating himself from the events occurring around him.  Rick hits many lows on his path to self-destruction and his jealousy makes him hurt those he once called family.  Liam is put through the wringer, not only by the man bent on his destruction, but also by the men who call him brother and especially by Milo who claims to love him.  Liam doesn't stand up for himself and tends to be rather childlike at times.  His inaction became very annoying, if he'd just spoken up for himself more often he wouldn't have been hurt so badly.  Milo lets his father's feelings about homosexuality permeate his entire life and destroy a relationship that was good for him.  He swings from being overly obsessive to ignoring the person he says he loves.  As I said, these characters were very hard to like and it diminished my enjoyment of the story.

The villain and his vengeful acts were some of the more extreme things I've seen from a villain in all my reading experiences.  It was rather jarring reading what he was able to get away with.  And for me at least, his ending is not as fulfilling as I would have liked considering his previous crimes.

I was expecting so much more from this story, since I love stories set in the music world, but felt disappointed as I turned the last page.  With characters like those in this story it was hard to root for anybody since I didn't really like any of them and finding any redeeming qualities was few and far between.  I'm not regretting reading this book, but there's so many things I wish were different.  For those wanting a challenging read that's definitely not like anything else you've read before, I recommend you give this a shot.  Be prepared for the conflicting emotions the storyline generates in a book you won't soon forget.

My rating for this is a C-