Review for Blinded by Our Eyes by Clare London 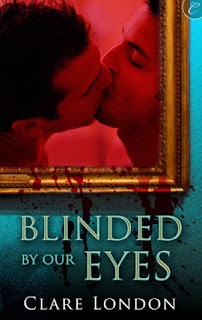 Up and coming artist Paolo is found dead in a pool of his own blood in this very suspenseful story that takes place in the cutthroat world of art.  From that dramatic moment on it's a race to figure out who the murderer is amongst a long list of suspects who we slowly learn were not as fond of the artist as they originally let on.

With the police not seeming to be diligently working on the case, art gallery owner Charles steps in to sort through the clues to find the murderer.  As he's questioning those in the artist's inner circle and gallery workers, he discovers other sides to the people he thought he knew and it makes him question everything he thought to be true.  All his previous beliefs have been shattered and now everyone looks like a suspect to him.  Former and future lovers now look like villains and Charles could well miss out on the love of a lifetime, and quite possibly his life, because of his disillusionment.

This story is from the m/m genre which might deter some from reading it, but they'd definitely be missing out on a sexy and exciting read.  It's intriguing seeing the dark side to what is normally thought of as beautiful and to see how far an artist is willing to go to create his art.  All the characters in this story are memorable and even though the story is told in the first person perspective you learn a lot about all the characters.  Paolo is very much the tortured artist and does whatever it takes to create his art.  His actions are so extreme that he becomes very unlikable and as a reader I wasn't sure whether to be upset about or applaud his being murdered.  The suspects were numerous and any of them would have been a believable choice since they all had a legitimate ax to grind in regards to Paolo.  The real murderer is not overly obvious and the reasoning behind the act is understandable.  The introduction of Antony as Charles' soon-to-be lover was fraught with sexual tension and amped up the suspense since he too was a plausible murder suspect.  The scenes between the two of them were intense and brought out a much more relaxed side to Charles that was nice to see amidst the horror of the crime.

Clare London has created another intense read with great suspense.  The characters are all fully developed while creating a mystery that leaves you guessing until the end.  I fully enjoyed this read and anytime Ms. London wants to keep me guessing, I'll be there with my thinking cap on with a fan beside me for those steamy interludes.