Review for Callum: The Cursed Clan by Melissa Schroeder 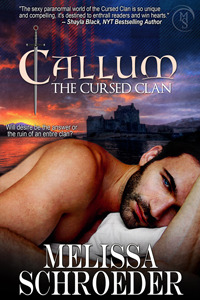 Will desire be the answer or the ruin of an entire clan?

As Laird, Callum Lennon feels he has always failed to protect his cousins. Callum’s impulsiveness caused the death of his father and the experience has scarred not only his body, but his soul. From that point on, he made sure to always go with the more logical choice in every matter. When his younger cousin Angus finds clues that might help break the curse, Callum begrudgingly hires Phoebe Chilton to investigate. Callum doesn’t like bringing outsiders into their family affairs. Their life would become fodder for the tabloids if anyone were to find out about the curse. It doesn’t help that the instant he meets Dr. Chilton he’s attracted. But, he doesn’t really have a choice because she might be their last hope.

An expert in archeology, Phoebe has always been dwarfed by her parents’ shadow. Their high standards had her in college by thirteen and earning a second PhD by twenty-two. But her career and her broken marriage have left her needing something more than just diplomas and degrees. She wants to prove that her interest in legends, especially Celtic legends, is as important as her parents’ work. When the Lennon family contacts her, she sees the opportunity to win a massive research grant. With a long-time rival breathing down her back, she jumps at the Lennons’ offer her, hoping it will ensure her the grant. But uncovering the Lennon family secrets, and her attraction to Callum, could prove more than she can handle.

Forces outside the family are determined to ensure that they fail. When an old enemy threatens both the well being of the clan and the fragile new love, Callum will have to choose between believing his mind or his heart.


*******************
Fans of sexy Scotsmen rejoice!  Melissa Schroeder has created a brand new paranormal series where a clan cursed with immortality desperately tries to find an end to their curse and must rely on outsiders to find the answers.  With this first book in the series we get not only a slew of drool-worthy heroes but a nice bit of high action and a ton of sexual tension with a few steamy sexual interludes.
Callum has been the head of the clan since he was a boy and felt a great weight on him to protect his family, never doing anything to jeopardize their safety.  It's led him to be overly cautious, never letting anyone fully into his life.  Of all of them, he's the most serious and obsessed with business.  At least until Dr. Phoebe Chilton enters his life.
Phoebe was a child prodigy with an off the charts IQ who attended college as a teenager.  She always did as her parents wanted, even when it came to who she married.  After being made to feel like a failure in the marriage bed by her dying husband she decides she's had enough and takes on a project that will forever change her life.  Upon meeting the rather obnoxious Callum, the sparks soon start flying.  There's a silent war going on between the two of them while the attraction between them gets harder to fight.  Once they finally give in their sexual encounters are extremely satisfying and well worth the wait.  Seeing Callum relaxed was also well worth the wait and he just oozed charm.  I definitely started falling in love with him at that point.
Phoebe and Callum were a great match.  They both had hard childhoods with the weight of the world on their shoulders.  Only by finding each other could they find their happy ending even with the small bumps along the way.
This was a story that started slowly, almost too slowly.  Once it hit the mid-point though things really picked up to a fast-paced and exciting conclusion.  The villain in this story was very stereotypical and didn't really have much of an impact until the latter half of the story.  But once he made his presence known he added a good dose of excitement.  What really made this story for me were the other members of the clan with their distinct looks and personalities.  Among them was the studious Angus, the flirty Fletcher, and the poetic Logan.  I loved each and every one of them and can't wait until they get their own stories and have to sacrifice for love.
This was an entertaining story that started slow but gained momentum to a rip-roaring conclusion.  There's a bit of intrigue to keep you waiting with bated breath for the next release and if the idea of a super sexy Scotsman with his sensual brogue doesn't tantalize you, I don't know what will.  So all you lords and lassies should definitely put this on your reading list.
My rating for this is a B.
*I received this book from the author in exchange for my honest opinion.
at February 23, 2012