The road to true love is never easy, but in Stacey Kennedy's new release Supernaturally Kissed, the road is even rockier than most when the one you love is a ghost.  Courtesy of Bewitching Book Tours you can learn more about this emotionally charged paranormal story by enjoying the snippets of delectable info in today's post.  First up is Stacey talking about her fascination with ghosts and giving you the opportunity to win this amazing book.....


Big thanks to Words of Wisdom from The Scarf Princess for having me by today. You know I’ve always been really fascinated by ghosts. I find the idea of their existence frightening, but appealing at the same time. I suppose you could say I want to know if their real, however I just don’t want to see one. Truth be told, I don’t think I’d ever sleep again, get undressed, take a shower or anything else if I thought someone was really watching me.
But just because I don’t want to see one doesn’t mean I’m not totally enthralled by the idea. I’m a huge fan of the television show, Paranormal State. When the show aired, I watched every single episode and was glued to the screen. Out of all the ghost shows out there, it always scared me enough that I hid under my blankets at night. But of course, I still watched it the next week.
Now that Paranormal State’s off the air, I’m totally hooked on Ghost Hunters. While Paranormal State always scared me, Ghost Hunters never does. I have to admit that it’s much more believable. While watching Paranormal State, even though it scared me, I didn’t always have the sense that what was happening was actually real. With Ghost Hunters, I have no doubt that there’s more truth behind it.
I’m sure it’s because the way the show is done is to prove that there isn’t a ghost there. They go into the houses or buildings to find a logical reason for what’s happening. But even though Ghost Hunters seems more real, I still have to wonder if what I’m watching is real or if it’s all tricks. Sometimes I wish a ghost would just pop up in front of me so I could finally have the answer I want. The other part of me would probably die from a heart attack if that happened.
So regardless, if ghosts are real or not, or if the television shows are totally fake I will still watch those shows, still hide under my blankets and tell myself I’m never going to watch another show. But then the next week, I’ll be sitting there watching.
I’d love to hear what you all think. Do you believe those television shows are real or do you think it’s all for show?
~*~
In thanks for stopping by and chatting today, I’m offering up one copy of the ebook Supernaturally Kissed (international). Leave your email address with your comment to be entered. Don’t forget to come find me on Facebook and Twitter. I love to chat!! 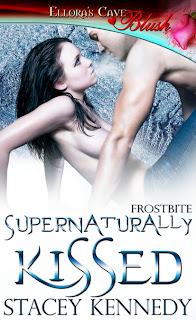 Be sure to drop her a line at www.staceykennedy.com, she loves to hear from her readers.


**********GIVEAWAY**********
The prize is a digital copy of Supernaturally Kissed.
-Giveaway is OPEN TO EVERYONE.
-To be entered just leave a comment answering the question Stacey asks at the end of her post (it's in bold print too).  Make sure to leave your email addy to make it easier to contact the winner.
-Winner will be chosen using random.org and will have 48 hours to respond to my winner's confirmation email or a new winner will be chosen.
-Giveaway ends at 11:59 PM CST on 3/1.
at February 21, 2012