Review for Tundra 37 by Aubrie Dionne 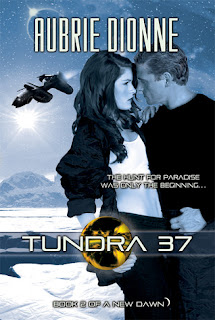 Gemme is a hi-tech matchmaker who pairs the next generation of Lifers aboard the Expedition, a deep space transport vessel destined for Paradise 18. When the identity of her lifemate pops up on her screen, she’s shocked that he’s the achingly gorgeous and highly sought after Lieutenant Miles Brentwood—a man oblivious to her existence. Believing everyone will think she contrived the match, she erases it from the computer’s memory.

Just as comets pummel the ship and destroy the pairing system forever.

With the Expedition disabled, the colonists must crash land on the barren ice world of Tundra 37 where Gemme is reassigned to an exploratory mission, led by Lieutenant Brentwood. Only in the frozen tundra does she understand the shape of his heart and why the computer has entwined their destinies.


********************
Tundra 37 is a wonderful addition to the New Dawn series continuing to tell the story about a ship full of specially chosen individuals making their way to a new world after the Earth dies out.  This particular expedition is full of intriguing characters, fast-paced action, scientific mysteries, and a bit of romance.  With flashbacks from the past to the present and told from differing viewpoints the reader becomes quickly enmeshed in the story and as the struggle for life plays out your heartbeat races to an exciting and satisfying conclusion.
The world building that Ms. Dionne has done in this book makes for an intriguing part of the story.  Seeing how desperate the situation on Earth has become with its pollution, starvation, and political crises the need to go elsewhere is plainly obvious.  The desperation people feel and the high hopes they have for the expedition are easily understandable and once the journey starts going wrong you can't help but feel their fear.  Each character we're introduced to is unique with their own memorable backstories and qualities.  From the psychic twins who have been physically connected to the ship for hundreds of years to the smart yet shy matchmaker to the young girl whose disability marks her as unimportant yet who has the ability to save everyone, I found myself fully invested in their lives and on the edge of my seat waiting to see what befell them next.
Gemme is insecure but oh so likable.  She's the matchmaker for her people, and using a computer she makes other couples happy, but when it comes to her own chosen match she doesn't think she's worthy enough.   Miles Brentwood is one of the elite and considered quite the catch.  He's honorable, handsome, and heroic.  The computer says they should be together but once their world is turned upside down it's up to fate to bring them together.  The sparks start flying between them the moment they see each other as the ship is falling down around them.  Neither has felt such a connection before and as the story progresses you realize just how deep their connection goes.  The love and attraction between them is blatantly obvious but it's never shown outright.  There's a bit of kissing but nothing more.  So those looking for hot and heavy action will be disappointed.  But those who want a deeply emotional love played out before them will find Gemme and Miles' relationship extremely satisfying.
There's a lot of scientific talk in this story that can get a bit overwhelming at times but it's nicely dispersed among some exciting action sequences.  The political and socioeconomic views are easy to relate to and very timely.  As a disabled person myself, the issues that are raised around disabilities were fascinating.
From start to finish I found myself fully invested in the story and these character's lives.  The action was fast-paced and moved along to a satisfying conclusion.  This book can definitely be read on its own but with such an intriguing concept as the New Dawn series presents why wouldn't you want to read the other books in this series.
My rating for this is a B+
*I received this book from the author in exchange for my honest opinion.
at February 28, 2012