Review for Few Are Chosen by Storm Grant 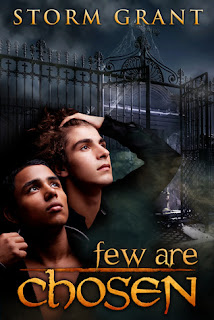 Sparks fly between virgin teenage demon hunters when the Chosen One turns out to be the Chosen . . . Two?

Apprentice warrior Blake St. Blake is the Chosen One, raised by an ancient order to defend the world against evil. Well, maybe not the whole world, but at least his neighborhood in downtown Detroit. When a dreaded reflux demon is sighted in a local cemetery, Blake is sent off to his very first battle, armed with his sword, his super-senses, his black leather duster, and a few well-rehearsed one-liners.

But another Chosen One gets in Blake’s way—an apprentice wizard named Shadow. While the boys argue about who’s the more chosen of the two, the demon escapes.

Blake wants to be angry, but it turns out he and Shadow have a lot in common. Besides, Shadow’s pretty cute, and Blake can’t help but think that the wizard’s skills (and hands and lips and other bits) might make the perfect complement to his. Blake and Shadow are brave enough to challenge the reflux demon in a second battle, but will they have the courage to tell each other how they feel?


********************
Storm Grant is an author known for nicely blending humor and romance and in her upcoming release Few Are Chosen that blend continues to be perfect.  This may be a short story but it's long on entertaining characters, witty dialogue, humor, and fast-paced action.  From start to finish the reader is drawn in and on the edge of their seat to see if our heroes succeed.
For Blake St. Blake life is all about training and trying to live up to being the "Chosen One".  He visualizes himself as a character from a book which leads to some humorous sayings on his part.  His fight scenes and interactions with the villain, a reflux demon, add an extra layer of humor that was thoroughly enjoyable.  Blake soon learns he's not the only "Chosen One", which leads to frustration for him as the other fighter seems better than him.  Shadow is a wizard similar in age to Blake who's life is also all about training so they have a connection.  Blake's intimidated by him but attracted too.  Only by working together will they be able to defeat the demon.
Blake and Shadow don't have much romantic/sexual experience but both know they're gay. With being trapped in a mausoleum comes time for experimentation.  This scene is handled beautifully with that sense of wonder at it being the first time.  It's a bit sweet and sexy and totally satisfying.  These two have formed a connection from that moment on that's more than friendship and I yearn to see things evolve from this monumental moment.


Ms. Grant has created a fast-paced and deeply satisfying story.  The dialogue is witty and humorous and kept my eyes glued to the page so as not to miss a single moment.  Blake and Shadow are a dynamic duo that drew me to them and I'm sure you'll feel the same.  I hope this is just the beginning of their relationship and implore Ms. Grant to return to this world as I'll definitely be waiting with bated breath to read more about these young superheroes.


My rating for this is an A!


*I received this book from the author in exchange for my honest opinion.