Review for A Chip in His Shoulder by L.A. Witt 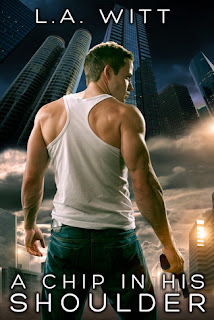 “Contract killer” is a fitting job for a vampire, and it suits Liam just fine. Cast down from the wealth and status of the Sky for taking a human lover, Liam lurks in the poor and pollution-choked Gutter, killing to survive. Between his natural strengths and his Cybernetix mods, no mark has ever escaped him.

Liam’s ex-lover Daniel is the heir to Cybernetix—and its greatest threat. Horrified by people less man than machine and the exploitation of Gutter factory workers, he’d rather destroy Cybernetix than inherit it . . . if his father doesn’t destroy him first.

Years of anger and a heap of mods have kept Daniel and Liam apart. When Liam is hired to slaughter a man in his glass Sky tower, he walks right into a Daniel-shaped trap. Daniel’s father has betrayed them both, and only by working together can Daniel and Liam survive the coming day. They have no reason to trust each other, but as the dawn looms, a bargain that began with the simple urge to live soon reminds them of the love they once shared. Can they find each other again, or will the Cybernetix assassins find them first?


********************
This book is set in the future where there's a dramatic difference between the haves and have nots.  For the haves is the ability to have implants to make you stronger and richer and live in the "Sky", whereas everyone else is just average and relegated to lesser jobs and living in the "Gutter".  As if an economic class distinction weren't enough of an issue there's also issues between vampires and humans where vampires think they're supreme and discriminate against humans.  All of these issues add an intriguing layer to an already exciting and thought provoking book that I hope leads to a sequel soon.
Vampire Liam once lived in the Sky before it was discovered that he had a human lover.  Suddenly he was left living in the Gutter using his genetic modifications and vampiric abilities to become a renowned contract killer.  He's become bitter over his circumstances and resents his former lover Daniel for what's happened.  When he gets a job offer he can't refuse he again comes in contact with Daniel which leads to conflicted feelings and life or death circumstances.
Life for Daniel hasn't gone the way he wanted it to either.  As Liam got more and more mods he thought he was losing his lover.  By bringing their relationship out into the open he thought he was saving him but ended up losing him anyway.  He's become hardened since then and more resentful of leading mod manufacturer Cybernetix, the company that he'll one day inherit.  When he and Liam are again forced into each other's company they have to work together to survive and the feelings one thought buried come out full force.
The world Ms. Witt has created is vividly presented and the issues between individuals is realistic and easily translatable to things happening today.  The grandeur and beauty of Sky living is in direct contrast to the grungy and depressing environment of the Gutter.  Where there's cleanliness and sunshine in the Sky there's darkness and choking smog in the Gutter.  The contrast between rich and poor is plainly obvious and the fight to end these differences is just starting in this book.
Liam and Daniel are both strong men and when they come together the sexual tension is off the charts.  With this being a short story there's not a lot of time devoted to their romantic history together.  Being told they loved each other deeply and being shown are two different things.  I wish there had been more opportunities to see them together in this way but they were too busy fighting for their lives to have romantic interludes.  The brief glimpses we got were really hot though!  Both of these men were betrayed by the same man which led to their being on the run.  Their escape was exciting and pulse pounding and had me on the edge of my seat but I would've gladly given up some of this action for more romantic action.
This book is a great beginning to what could be an intriguing continuation.  The ideas presented here are thought provoking and could have even more interesting ramifications for the future.  With strong-willed men like Liam and Daniel leading the way the rebellion just hinted at here could lead to one heckuva story.  So here's hoping that we'll be revisiting this world soon!
My rating for this is a B.
*I received this book from the author in exchange for my honest opinion.
at February 16, 2012