For readers that like their romance with a bit of steam and naughtiness Dana Littlejohn delivers.  Courtesy of Goddess Fish Promotions I get to bring you a taste of her new hot read The Seven Year Switch along with a giveaway.  So get comfy and learn more about Dana in my interview with this new to me author.....


TSP:  How did you get where you are today with your writing career?
DL:  I write whenever the characters tell me to write. When their story is complete I submit. That is the process I plan to use until they stop talking to me. I also spend every day that I can promoting my books, past present and future releases to keep my name out there.
TSP:  What's an average writing day like for you?
DL:  When I get home from work after doing house stuff, I’m at my computer until the characters stop talking. I’m usually working on 2 sometimes 3 stories at a time so I never know which I’ll be working on until I pull up the folder.
TSP:  What sets your books apart from others and what would you tell people to encourage them to buy your books?
DL:  That’s kind of a hard question. There are so many good books out there by so many great authors who have a similar style to mine. I’m sure they all have the same thoughts in mind that I do when I write my books.  I try to make all my characters real, someone my readers can relate to in some way. I put them in real situations, in everyday places. My readers have mentioned that that is one of the things they like best about my books.  They recognize the places or the situations and it makes the book that much more real to them.
TSP:  What can you tell us about your latest release, The Seven Year Switch?  How did you come up with the storyline?
DL:  I was out with a girlfriend having lunch and she was venting about her husband. She wondered how different her marriage would be if she was ‘in charge’ of everything instead of him. I took that notion to the extreme and then wondered myself what a marriage like that would be like.  The Seven Year Switch is about an established couple who decide to flip the traditional roles of husband and wife…with a little sizzle added. *wink*
TSP:  Many of your books are erotic in nature.  What draws you to this genre and why do you think it appeals to readers?
DL:  It’s not really on purpose. I try to stay true to the storyline and the character’s personalities within. If the main characters don’t call for that type of situation it doesn’t go in, but lately I’ve been having a lot of sexually interested characters. LOL!
TSP:  Any WIPs that you can share with us or any other top secret info I can pry out of you?
DL:  LOL!  Sure. I have a futuristic space pirate story I’m working on called Renegade Rae. She is a female trader hiding behind her father’s flag after he dies. Rae never does face to face trade sending her men to do so, but in order to get something she really wants she has to or find someone to pose as ‘Infamous Renegade Rae’. She goes to a slave planet to get someone she can control but when she acquires the slave she finds she is the one being controlled.
Also, I am working on a contemporary called Devine Intervention.  Delisa Stewart loses her job, her home and two years of her life to a liquor induced mistake. When she gets out her best friend gives her job as her consultant and a place to stay so she can start over. The only thing Delisa thinks came of her prison stay was she learned she loved working out. She joined a nearby gym and met Jacob Devine. She instantly thinks a man that fine and that intelligent would never want anything to do with an ex-con…or would he?
TSP:  How has the digital revolution affected your career and how you market yourself?  Do you have an eReader yourself?
DL:  I think the digital revolution has exploded the ebook industry. I think that is fantastic. Not only because I am a writer but because it is good for the future storage literature and the environment. Yes, I do! I was always an avid reader so my shelves are covered, but I jumped on the ebook thing as soon as they came out. I have had several while they tweaked them and got all the bugs out, but now I have a Nook and I am happy with it.
TSP:  My site is all about favorite things.  What are your favorite things, the things you can't live without?
DL:  Nowadays I would have to add my Nook to that list, but with it would be my old stand bys: sun flower seeds, diet Cherry Pepsi, kettle corn and my fuzzy socks! LOL!
TSP:  Thanks so much for taking the time to answer my questions, Dana!  I look forward to your responses as well as your visit to my site.
DL:  Thanks for having me! I had a blast. I hope to come back one day. 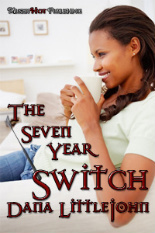 The Seven Year Switch by Dana Littlejohn
Could you make the switch from dutiful, submissive wife to paddle wielding queen bee to save your marriage?
Sonja Winters was enjoying the good life with a great job and being married to the man of her dreams. As she prepared to celebrate their seven year anniversary she came across a secret that her husband had been keeping from her that would alter the course of their marriage forever.
EXCERPT ONE:
“Yes, I understand.” Bianca sat next to her and openly looked her over. “I see now why he chose you. You are beautiful and strong. You will be able to control him well.”
Sonja scoffed. Her anger at the situation came back, fueled by Bianca’s nonchalant description of her ability to deal with her husband.
“If you’re talking about my husband, I was controlling him just fine until you came along.”
“Hmm, I can appreciate how you must feel, but you do not have all the facts.”
Bianca clapped her hands and two men appeared. They looked similar to the biker guy who led her into the room except they were much younger and more firmly built. They dropped to one knee and bowed their heads.
“Yes, Mistress,” they said in unison.
Sonja’s eyes widened and her jaw dropped. Bianca’s voice roused her from her stunned state.
“Sonja, would you like a drink?”
“Uh…”
“Coffee, tea, perhaps a glass of wine,” she offered.
“Umm, yes, a glass of wine would be nice.”
“You heard her and bring fruit, too,” she told the men.
Sonja’s emotions teetered between anger, confusion and amazement. These large and strong looking, fully grown men were seemingly at Bianca’s beck and call. They left the room to do her bidding with only a comprehensive nod. She turned a look to Bianca. Sonja was sure her face reflected the surprise and shock wavering inside her over the men’s behavior. It was hard to hide as she looked at her hostess.
“Please, allow me to explain. These men come to me from various places and all walks of life, but they all want the same thing and they pay me to give it to them.”
“Uh-huh, and what’s that?”
“They want to be dominated by a woman.”
EXCERPT TWO:
“Submissive men will always seek strong women because they are in need of her guidance,” Bianca said continuing her explanation.
Bianca’s voice was in an audible octave, not at all a whisper for Sonja’s benefit or to spare the feelings of the men. Sonja sipped her drink and sent a quick glance toward them. To her surprise, they stood at perfect attention, staring straight ahead showing no signs of emotion at all to what Bianca just said.
“Yes, well, I wouldn’t know that, Bianca. My husband is not a submissive man.”
“No disrespect to what you think you know, Sonja, but I beg to differ. Kyle is, in fact, a submissive man. He is what I call an alpha submissive. At work he can be very dominate and extremely aggressive when it comes to other men, but with a woman he has the desire to be humble and subservient.”
Sonja crossed her legs and turned her body toward her adversary. “Look, you must have my husband confused with another one of your men,” she sent a pertinent wave in the men’s direction, “because I know my husband. Kyle and I have been together for—“
“You have been together for the last ten years. You met while you were still in college. Kyle’s company was doing a project on your campus. He bumped into you, and you guys have been together ever since. Since then, you have graduated and have become a successful lawyer. You and Kyle were married October fourteenth, and yesterday made your seventh year anniversary. You have no children, but you want at least two, and a dog. You are leaning toward the Jack Russell breed because you want a smart dog that will not out-grow the child physically.”
Sonja’s eyes widened as she raised the cup to her mouth.
“Have I left anything out?”
Get yours at Muse it Hot:
www.museithopublishing.com

Dana Littlejohn was born and raised in Brooklyn, New York, but has called Indianapolis, In. her home for over ten years. She has always wanted to write since early childhood, but put that wish on hold to raise her growing family and have a career. With the encouragement of her husband, Dana picked up her pen again in 2003 and has no intention on putting it down. With 3 novels, 8 novellas, 4 stories in anthologies, 42 short stories published to date and a long list of wips (works in progress) she is literally living her dream. Join her on the wild journey through her imagination. It’s a ride you’ll never forget!

**********GIVEAWAY**********
Giveaway is for a promotional pen to one randomly drawn tour commenter and a promotional T-shirt to another commenter.
-Giveaway is OPEN TO US & CAN!
-To be entered just leave a comment along with your email addy.
-Two commenters will be chosen randomly and named winners from all comments made throughout the tour, so the more tour stops you make a comment on the greater your chances of winning.  A list of all participating blogs can be found here.
-Giveaway ends at 11:59 PM CST on 3/2.
at February 29, 2012