Review for We Shall Rise by J. E. Hopkins 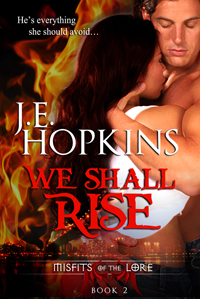 War surrounds him, yet for vampire Kaden Gaspard, there is no greater battle than the one his mind has waged against his heart. He knows he should stay away from her. Reysa. The half-breed vampire warrior who had risked her life to prove his innocence for the seven murders for which he was accused, but had not committed. This stubbornly loyal woman who dedicated her life to her family of misfits - immortals shunned and abandoned by their clans for their impurity of blood and genetic mutations. This courageous and valiant African warrior who Kaden fears could never love the monster that he is destined to be.

As Kaden and Reysa struggle to accept the undeniable bond between them, they must come together to stop the emerging terror that threatens to destroy all immortals. The lesser immortals – witches, sages, shifters, demons, hybrids, charmers and foreseers – have declared war against the pureblood vampires and lycans who have used their purity of blood and greater strength to enslave the weaker races. No immoral is safe. This is a fight for freedom and a fight against genocide. There can be no true victor as death looms for them all.


********************
The excitement continues in this second book in the Misfits of the Lore series by J.E. Hopkins.  Pureblood vampire Kaden grew up tortured by his demented father until one day he had enough and killed him.  The guilt from that incident weighs heavily on him throughout this story and makes him feel unworthy of happiness.  He feels that his DNA is tainted and wants nothing to do with a mate or starting a family.  The constant attraction he feels towards half-vampire Reysa is driving him mad and it's a struggle that he's slowly losing in keeping away from her and the sense of family she can give him.  I ached for Kaden and his tortured childhood and kept hoping he'd allow himself happiness.  He truly believed his blood cursed through no fault of his own.  He sees other vampires around him finding their mates and truly wants what they have but is so scared the cycle of violence will continue.  His sacrifice made me sad for him and admire him a bit as well.  Of course it also made me want to hit him in the head sometimes.  In one breath he says he needs to stay away from Reysa and in the next he's jumping her bones.  This angsty tug of war got to be a bit much after awhile and I can see why the heroine got fed up, I would too with being led on.  I desperately wanted him to just get over it, put the past behind him and stop the self flaggelation.  He's such a strong vampire physically and I wanted him to be mentally as strong too.  It took almost all the book before he finally became strong inside and out and became the mate Reysa deserved.

Reysa is a half-vampire warrior who's used to being looked down upon for her mutt bloodline.  She too had a tough childhood but instead of pulling away from people she's made a family for herself by bringing others of half-blood status from all the different otherworldly groups to live with her and visit her nightclub.  This allows a lot of intriguing characters to be introduced, quite a few sexy ones truthfully, that I long to see more of.  Reysa knows what she wants and is willing to put her heart on the line to get it.  I liked that she was the stronger of the two both mentally and physically.  It made for a memorable heroine with many of my favorite qualities.

Even though they fought each other every step of the way, once they got together the sexual interludes were smokin' hot.  The sexual tension surrounding them was intense every time they were together, whether they were in bed or out and it made me scream for them to "just do it".  I liked them as a couple and rooted for them to finally find happiness after their traumatic childhoods.

There's a war brewing between the purebloods and lesser bloods in this story that created many action-packed sequences.  There's experimentation on children, germ warfare, and deadly drugs being used in the fight that gave an interesting parallel into how humans wage war on one another.  There's issues of discrimination and a kind of race war that this story presents that I found very intriguing and could easily relate to the world I live in.

There are many varieties of otherworldly characters with unique abilities in this story.  There's Sirens (a sexed up huntress Anastasia), lion shifters (a particularly sexy one named Yanis), cat shifters (a tortured and sensual one named Alejandro), witches (a physically tortured one named Yasmine), half-vampire/half-werewolf (an uber sexy Christian), and the one who will change the war (Tatiana, Reysa and Christian's deaf adopted daughter).  There were many others too and they were introduced at a fast pace at times which made it hard to keep track of them all.  I'm intrigued by them all and hope each of them can have their own story so we can learn more about each one in depth.

As the second book in the series there are many things from the previous book that creep up here.  Luckily, important familial connections and past actions are easily reiterated and seamlessly incorporated into the current storyline.  So reading the previous book isn't a necessity, but it would give a stronger glimpse into what Kaden suffered and the reason for the rift between him and his brother Julian.  This book also ends on a cliffhanger, so those with weak hearts and issues of impatience beware!  The final scene had me screaming at the top of my lungs and I'm now counting down the days until the next book in this series.

This book is another entertaining edition to the Misfits of the Lore series.  The action is amped up as the stakes get higher.  Lots of memorable characters make for a compelling story that I was sad to see end.  Those looking for a worthy new series in the paranormal genre can add this to their list and enter this well written and engaging world created by J.E. Hopkins.

*This book was given to me by the author in exchange for my honest opinion.
at February 04, 2012