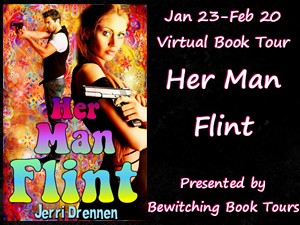 Here's a great way to end the weekend courtesy of Bewitching Book Tours!  Today we get to spend some time with Jerri Drennen learning about her new release Her Man Flint.  So get comfy and enjoy what Jerri has to say in this character interview between our hero and heroine......


On today's "Talk To Me, Susan" we're doing a thing called, "He said, She said", or in this case, "she said, he said" Our first two guests hail from Denver, Colorado. They're an ex-couple who remain partners on the job. Please put your hands together for Adriana Kent and Flint Morgan. We'll start with Adriana. I'd like you to tell the audience a little bit about yourself and what your problem is with Flint.
"Hello! I'm a special agent with the Department of National Security. The man sitting next to me is my partner, Flint, who I'll just say is a cad and a jackass. The two of us used to share a bed until I found him on our mattress with a red-haired bimbo, who just happened to be working for a guy who's on our most-wanted list.  This alone only reiterates in my mind how incredibly sloppy Flint has gotten, but you can't tell him this since he's a cad and a jackass. I think I might have already said that, but I'm hoping if I say it enough, it'll sink in. Let me just mention here that I've worked hard to get to where I am in the agency and I refused to allow my distaste for Flint to destroy the career I've built. When things were starting to get back to business as usual, this fake-breasted fem-fatale ended up with a bullet in her head. In Flint's apartment. The gun used in the kill shot, his. For whatever reason, I felt obligated to help get his sorry ass out of trouble. Okay, maybe obligated isn't the right word, and to be brutally honest, I have this crazy obsession with Flint's ass. Can I say ass on television? I mean, you could literally bounce a quarter off the thing, or is it mine you can? I'm not sure. All I know is that I couldn't let him be railroaded into a murder he didn't commit. What kind of partner would I be if I did?"
So, Flint, do you have a rebuttal for what Adriana said?
"She is so full of herself. It is true that I was in bed with this redhead, but I don't remember a damned thing about it. Until today I refused to admit that to Adriana. I mean, why not let her think I had the night of my life with the woman (I might have said those exact words to her at the time). I was angry since she was playing mouth-to-mouth with some doctor she'd met when she ran her Porsche off the road while trying to apply makeup. You think a guy would do something so stupid? But I digress. Anyway, so, maybe there was a lack of judgment on my part drinking myself into a stupor the night I met this lady, but I wasn't thinking clearly at the time. I was actually contemplating strapping on the old ball and chain with Adriana. How crazy is that? And, on the record, I never asked her to save my sorry ass. She volunteered and got herself kidnapped and sent overseas to some prince who intended to tame her wild ways. Like that would ever happen. Anyway, I rescued her from a fate worse than death--becoming yet another concubine to this lecherous fiend. Truth is, and I'll deny I said this if asked again, I love Adriana. Too bad she only loves one person--herself!
Well, Adriana?
"First, I wasn't putting on makeup when I had that accident in my Porsche. I was deliberately run off the road by a pair of goons who worked for the dead woman's boyfriend. As far as the doctor he's talking about, Flint had already destroyed our relationship long before I started dating him. Mister Morgan likes to embellish things to make himself look less like a cad. As far as him loving me. Huh! The man doesn't know what the word means."
"Flint?"
"I don't know what she's talking about."
"Exactly. I rest my case."
Okay. Now, it's time to poll the audience? What do you all think? Do you agree with Adriana? Is Flint a cad and a jackass. It's time for you to decide. When we come back from commercial break, we'll have an answer. Then, we'll move on to our next couple who come to us from Washington D.C. 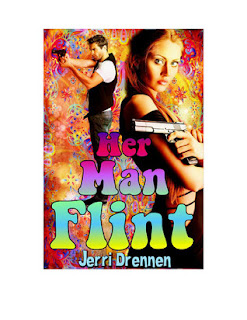 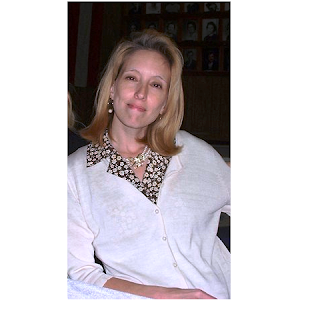 Jerri Drennen was raised on a farm in a tiny town in Minnesota where the winters were long and being stuck inside awarded her the opportunity to read and tell stories. Years later, after moving away from family, marrying her husband of twenty-five years and having their four children, she started writing when her youngest was three. Eleven years and many manuscripts later, she has one contemporary romance and three romantic suspense novellas with Samhain Publishing, a category romantic suspense at The Wild Rose Press and two action-adventure romances at Liquid Silver Books. Now, she's trying her hand at self-publishing.