Review for With This Kiss by Victoria Lynne 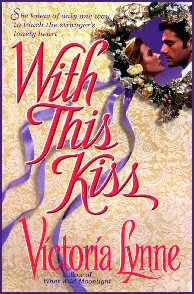 Beauty and the beast--they were the scandal of the ton....

All eyes feasted on the beautiful flame-haired gambler in London's most  infamous club.  But Julia Prentisse was interested only in the rake-turned-recluse whom they now called "The Beast." She lured him out of the crowded club to a deserted warehouse, where she made her scandalous offer: If he married her and protected her from her uncle, she would help him catch the arsonist who had ruined his life.

An act of heroism had left Morgan burned, scarred for life. But Julia's bold gaze lit other fires he had long suppressed. And now this glorious stranger was his bride. But when he tried to claim his husbandly rights, she demanded three months grace--three months to know a stranger's mind, to touch a stranger's soul, to go where no woman had ever gone before. Into his lonely heart . . .With This Kiss.


********************
As a big fan of historical romances who's read many of them, after awhile they tend to all follow a familiar formula.  So when a book shakes things up a bit it should be complimented.  Thus is the case with Victoria Lynne's With This Kiss.  As the hero and heroine struggle to admit their true feelings there's a serial arsonist on the loose who's left the hero scarred and has a deadly obsession with the heroine and sets fires in her honor.
The romance between Julia and Morgan was full of angst and evolved one painfully bittersweet step at a time.  Morgan is self-conscious of his scars and Julia doesn't think she has anything to offer after the scandal her father caused.  Neither has had an ideal upbringing, but whereas Julia remains optimistic Morgan questions everyone's motives.  One of them has to take the first step and luckily as the story progresses Julia takes that leap.  It's a very emotional moment and one I longed to see.  Julia was a strong heroine with many admirable qualities.  She stood her ground with her husband, was always honest with him, and fought for her principles.  She was almost too perfect, ALMOST.  Morgan was the typical shallow cad before the fire that left him with numerous scars.  He's changed now and not confident in his sex appeal which made him rather cranky and sarcastic.  At times I wanted to smack him for his bad behavior, but I was still drawn to him and and was rooting for him to accept the love Julia was offering him.
The mystery of Lazarus, the serial arsonist, was a well-kept secret with many believable red herrings along the way.  The glimpses we get inside his head throughout the story are unsettling and make him a formidable villain.  He's truly mad and his thought process makes his actions, and the book's storyline, very unpredictable.  This had me on the edge of my seat and drew me in wholeheartedly as I tried to discern whodunit.
This was an enjoyably entertaining story with likable characters and a truly scary villain.  There were many extremely memorable secondary characters as well that propelled the story along at a nice pace.  This was my first time reading one of Ms. Lynne's books, but considering my great enjoyment of it, it won't be my last.
My rating for this is a B+
*I received this book from the author in exchange for my honest opinion.
at February 15, 2012