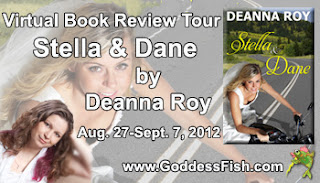 Those wanting a story with a soap opera feel with quickly get drawn into this new release by Deanna Roy.  Stella & Dane brings together two souls wanting to escape before tragedy strikes to completely upend their lives and show the true meaning of love.  So keep reading to get a glimpse of this book, my review of it, along with the chance to win an Amazon GC just for commenting. 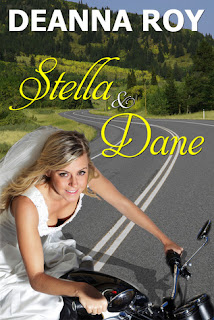 Stella is one step from leaving her honky tonk town when bad-boy Dane roars through Main Street on his prized Harley-Davidson. Their dangerous romance keeps the locals talking, but when Dane is sent to prison for manslaughter after a bar fight, the couple discovers their love runs deeper than their reputations.
EXCERPT:
They cut across the yard and pushed through a broken-down gate. Stella dug through her purse and pulled out her keys. Dane leaned the bike against the house. The moon slid behind a cloud, pitching them into near-blackness. Stella dropped the keys and cursed. He felt his way along the house, tripping over a coil of garden hose.
The landscape brightened again, and Stella fumbled with the door. “I don’t get it,” she said.
He came up behind her on the stoop. “Get what?”
“The key. It isn’t working.”
“Here.” He fished his own keys from his pocket and twisted a tiny light hanging on the chain.
“Sure it’s the right one?”
“I’ve been going in this door all my life.”
He shone the light on the lock. “It’s new.”
“What?”
Stella crowded in. “Oh my God. She changed the locks. My mother changed the locks.”
Dane squeezed her arm. “She’s upset, Stell, that’s all.”
Stella turned and leaned her back on the door. “She locked me out of the only place I ever called home.”
Dane could feel the trembling in her legs. “I’ll get you in. Not like a little lock can stop someone like me.” 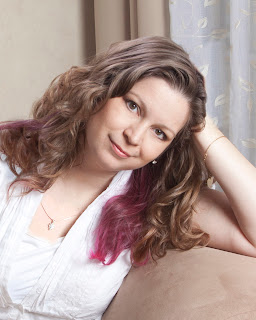 Deanna is the author of Baby Dust and Stella & Dane, interrelated books on the hardships we sometimes face while searching for that ideal love and looking to build a family.

Her articles and short stories have been published in many magazines including The Writer magazine, The First Line, and publications by SCBWI and the Writers' League of Texas. Her best work has been collected into a short story collection Single Edged Blades.

She lives in Austin, Texas, with her two daughters and new husband. They were married 6.9.12!

This is a highly emotional read that shows the worst of small town prejudice while showing that family is what you make of it.  Stella's been wanting to leave her small town for years and has been saving money and constantly looks through a binder she's made of possible places to go to.  It never seems like the right time to go though until it's too late.  The cause of her decision lies with sexy biker bad boy Dane who she's immediately drawn to.  He too feels that intense connection, and after a steamy encounter on a ladder, they're planning for the future.  Bad decisions and impulsivity lead to a tragic event that causes their plans to go up in smoke and shows the true meaning of love and devotion.

In the beginning of their relationship I found Stella a bit unlikable with her impulsive and attention-grabbing choices.  She never thought through her quick connection to Dane and the ramifications of that.  Dane too was impulsive with anger issues and jealousy that made him easy to rile which led to devastating consequences.  As the story progressed, and they matured, I found their acts to be more responsible and their characters more likable.  At first I also didn't believe in the strength of their emotions as they only had 4 or 5 interactions.  Stella proved me wrong though as she stood by her man for 12 long years.

I enjoyed the look and feel of the small town, as well as a few of the individuals.  The images and prejudices were mostly believable and realistically presented.  A few of the residents showed why a small town can be like a family by showing their support of Stella and Dane through thick and thin.

This story puts the reader on an emotional rollercoaster as events spiral out of control for our couple.  It's a well-written story with realistic characters that you might not always like but are always interested in.  The epilogue is a bit confusing but wraps up things nicely.  Readers who like high drama will definitely like this.

*I received this book from the author in exchange for my honest opinion.

Deanna will be awarding a $25 Amazon GC to a randomly drawn commenter during the tour.

-Giveaway is OPEN TO EVERYONE!
-To be entered, MUST leave a comment, ALONG WITH YOUR EMAIL ADDY.
-One commenter will be chosen randomly from all comments made throughout the tour, so the more tour stops you make a comment on the greater your chances of winning.  A list of all participating blogs can be found here.
-Giveaway ends at 11:59 PM CST on 9/7.
at September 05, 2012