Book Review for Hold On by Arell Rivers...

Fans of rock star romances will be drawn to this prequel that gives insight into the heart and mind of the delicious rocker, Cole Manchester.  Through three other installments in The Hold series readers have fallen in love with him and become fully invested in his epic love story with the sweet and supportive Rose Morgan.  This novella shows us where it all started and for new readers it’s the perfect time to become a part of their hard-won HEA once you get my impressions of this quick yet immensely satisfying tale. 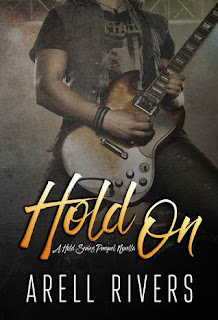 For upcoming singer-songwriter Cole Manchester, getting signed with the industry’s best record label topped his bucket list. And now, with contract in hand, his appetite grows... along with his list.
—Headline a tour
—Win a Grammy
—Party like a rock star
—Feast on a steady diet of hot chicks
—Do his mother proud-thankfully, his publicist works overtime
Taking place prior to the first three books in The Hold Series, this prequel novella offers a taste of Cole’s early lifestyle. He indulges all his passions, but soon finds that scoring on and off the stage has unpredicted consequences. So, grab onto the aspiring rocker with both hands, and HOLD ON.

About one hundred of my fans line the room, many of them carrying items for me to autograph, everything from photos of me to bras. They erupt into a warm welcome—clapping punctuated by excited shouts and woots.
“Hello everyone,” I say, even though only the first few people can hear me. I take in the mainly female gathering. Most of them appear to be in their early twenties, but some young teen and tweens—accompanied by their moms—are thrown in for good measure. This, my label has told me, is my demographic. Works for me. Everywhere I look, I’m greeted by smiling faces.
“Hello!” I shout a bit louder, careful not to hurt my voice before the show tonight. I join the radio DJ at the front of the room, waving to my fans as I go. He motions for the crowd to quiet down, with some minor success. Thankfully, he has a microphone.
“Welcome to Phoenix, Cole. If last night’s concert was any indication, tonight’s going to be a fantastic show!”
I drink in the moment of warmth and nod in gratitude. “Thanks.”
“Do you have anything to say to your fans before you start signing?”
A hush descends on the room, my fans quieting to hear my every word. Clearing my throat, I begin. “I want to thank each and every one of you for coming out tonight. Ever since I was a kid, all I wanted to do was make music. It’s because of you that I’m able to live my dream—“
From the back of the room, a female voice shouts out, “You’re my dream, Cole!”
I wink in the general direction of where the voice emanated from. “Why, thank you darlin’. And I want to be your dream for a long time.”

Readers are again pulled into the life of rock star Cole Manchester in this prequel that depicts the sexy rocker’s early days on the road.  It’s a time of excitement and an embracing of some of the benefits of being a rock star that make this a sexy read that had me fully invested from the very first page to the last.

From the very start it’s clear that Cole is close with his family.  There’s lots of love and support and his fame is a result of their close connection.  They also keep him grounded which keeps him from giving in completely to all the usual vices that come with fame and kept him from becoming a one hit wonder.  That’s not to say that he’s a monk though as there’s plenty of steamy encounters with groupies when he gets off the stage.  They’re all meaningless encounters though as readers notice the sparks that begin flying between him and his PR person, Rose Morgan.  With his mother’s wise assessment of Rose running through his head readers get fully on board with what’s to come in this emotionally intense series full of twists and turns that kept me on the edge of my seat.

Ultimately this is a delightful start to what became an engaging series.  It’s a quick read that packed a punch as there were numerous clues about what was to come in The Hold series.  Cole’s a delicious hero with a heart of gold.  He enjoys his rock star life but there’s moments where he longs for more.  It’s going to be a rocky journey to HEA though as he’ll have to play the media’s game to stay on top.  At times he’ll have to embrace the unentangled rock star life despite wanting to be the down-to-earth man his mother wanted him to be.  Through it all though he remains the charming and sexy Cole we first meet in this novella and through three more installments Ms. Rivers delivered in a series that I highly recommend to other fans of rock star romances. 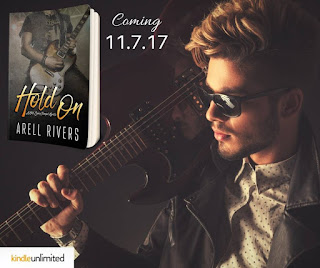