As a fan of rock star romances I was immediately drawn to this tale of a rock star sacrificing his desires for the sake of fame and the friend who becomes so much more.  Keep reading to get a tempting taste of Infamous by Jenny Holiday, along with my impressions of this sensual m/m romance.  You’ll also get a message from Ms. Holiday and find out more about this book by visiting the other sites hosting this tour.  In honor of this second installment in the Famous series leave a comment telling me what your favorite rock star romance series is for the chance to win a $20 Amazon GC too!

Here’s a message from Ms. Holiday...Hello! I’m Jenny and I’m happy to be here to celebrate the release of Infamous. Infamous is book two in the Famous series, which mixes m/f and m/m romance. (And mixes famous musicians and regular people!) In Infamous, Jesse, our resident bad-boy rock star has to decide if he’s willing to risk his career to be with Hunter, a doctor he’s rapidly falling for. I hope you enjoy it! 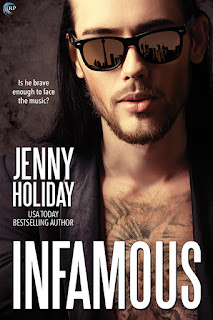 All that up-and-coming musician Jesse Jamison has ever wanted is to be on the cover of Rolling Stone. When a gossip website nearly catches him kissing someone who isn’t his famous girlfriend—and also isn’t a girl—he considers the near miss a wake-up call. There’s a lot riding on his image as the super-straight rocker, and if he wants to realize his dreams, he’ll need to toe the line. Luckily, he’s into women too. Problem solved.
After a decade pretending to be his ex’s roommate, pediatrician Hunter Wyatt is done hiding. He might not know how to date in the Grindr world, how to make friends in a strange city, or whether his new job in Toronto is a mistake. But he does know that no one is worth the closet. Not even the world’s sexiest rock star.
As Jesse’s charity work at Hunter’s hospital brings the two closer together, a bromance develops. Soon, Hunter is all Jesse can think about. But when it comes down to a choice between Hunter and his career, he’s not sure he’s brave enough to follow his heart.

*****GET A MORE IN-DEPTH LOOK AT INFAMOUS AT RIPTIDE PUBLISHING*****

As a reader obsessed with rock star romances, I was immediately captivated by the cover to this book and the smoldering lead singer desperate to live life on his own terms that’s depicted.  From the first page to the last I was quickly consumed by this story and its familiar storyline that won me over wholeheartedly nonetheless.

Jesse Jamison’s fame is skyrocketing, but it’s his personal life that’s floundering. When first we meet him he’s indulging a bit too much and getting dumped by his girlfriend after pictures of him kissing someone else surface.  It’s at that low point that he meets someone that will change his life irrevocably, a man that makes him question how he’s been living and becomes his muse that takes his band to the top of the charts.  To reach those heights though he has to sell his soul, deny who he is, and live a life that’s manufactured.  He’s able to keep up the charade for awhile but once he’s reunited with Hunter it’s clear that his life will change regardless of what his manager or his fans decide.  He and Hunter become fast friends, finding a soul-deep connection that ends the loneliness they’ve both been feeling.  But as time goes on those feelings turn romantic. Despite fears over what coming-out could mean for his band, the constant war raging in his heart can no longer be denied as it sets off a series of heartbreaking events that show Jesse who his real friends are and just how much Hunter means to him.  Jesse’s an immensely appealing character full of charm and teeming with sensuality.  He puts on a facade of being the sexy partying rock star, but he has a big heart of gold and deeply cares for those he calls friend.  He’s torn by his feelings for Hunter, desperate to be honest and claim him out loud, and I ached for him in feeling he had to choose between his wants and needs.  He’s the ideal rock star in many ways, and while I enjoyed seeing his bad boy rocker side, it’s the quiet moments between him and Hunter that I cherished the most.  Their closeness was one based on mutual support and caring and it just felt right when they evolved from friends to lovers.

Hunter Wyatt just ended a decade’s long relationship with a man that kept him hidden from the world.  He’s left alone and starting over and it’s at that point that he meets a man that will complete him.  It’s a long journey to reach HEA though, a journey full of uncertainties and heartache that kept me fully immersed in all the highs and lows.  Hunter’s a strong-willed character who refuses to be anyone’s secret ever again.  He’s quiet yet commanding when it comes to standing up for what he needs and I admired him for that.  Hunter has a big heart too and he and Jesse had a crackling connection teeming with sexual tension that was palpable.  He was torn by his feelings, scared of ruining their rich friendship, but once they finally admitted the truth about how they both felt I squealed like a school girl.

This was a charming romance that moved at a very slow pace, almost too slow at the start especially.  I enjoyed that time was taken to create a solid foundation between Jesse and Hunter which made their journey to HEA all the richer.  Jesse’s fear of the damage coming-out might have on his career didn’t ring completely true though as times seem to be changing a bit.  Media’s hot topic today is quickly forgotten tomorrow, so any negativity wouldn’t last long. Jesse and Hunter were a decadently delightful pairing.  Their scenes together were full of heart and soul with dual POVs that gave us great insight into the thoughts and feelings they kept hidden.  The music world was vividly depicted too, warts and all, showing a world based on fiction more than fact.  It’s a cutthroat world where individuals sometimes have to sell their soul to reach the top, which is why I cheered when Jesse finally took control of his life.  Jesse’s bandmates are a fun bunch, playful, with interactions that were brotherly in their mocking.  I would’ve loved to see more of them as they were a good support to Jesse who had far too many people in his life wanting to use him and not wanting to see the man behind the image.  I’d actually love to see them take center stage with stories of their own as the glimpses we got of them were very tempting.  From start to finish this was a romance that kept me invested wholeheartedly as the intense emotions seeped into my heart and had me rooting for this likable couple to get their much-deserved HEA.  Though this book is part of a series it stands strongly on its own and I look forward to what this author plans next.

Jenny Holiday started writing in fourth grade, when her aging-hippie teacher, between Pete Seeger songs, gave the kids notebooks and told them to write stories. Jenny’s featured poltergeist, alien invasions, or serial killers who managed to murder everyone except her and her mom. She showed early promise as a romance writer, though, because nearly every story had a happy ending: fictional Jenny woke up to find that the story had been a dream, and that her best friend, father, and sister had not, in fact, been axe-murdered. Today she is a USA Today bestselling author of historical and contemporary romance. She lives in London, Ontario.

-GIVEAWAY IS OPEN TO EVERYONE.
-To be entered, LEAVE A COMMENT TELLING ME WHAT YOUR FAVORITE ROCKSTAR ROMANCE SERIES IS (ALONG WITH YOUR EMAIL ADDY). NO EMAIL ADDY=NO ENTRY.
-To increase your chances of winning, comment at each of the stops on this tour.
-Winner will be chosen randomly from amongst each valid comment left.
-GIVEAWAY ENDS AT MIDNIGHT EST ON DECEMBER 2ND.
at November 29, 2017