Set in the world of winter sports readers will find themselves captivated by this tale of opposites attracting.  Keep reading to get a tempting taste of Unmasked by Magan Vernon, along with my impressions of this New Adult sports romance, then add it to your bookshelf.  In honor of this exhilarating romance make sure to fill out the form below for the chance to win a 20 oz Tumblr and Bailey’s-filled chocolates too! 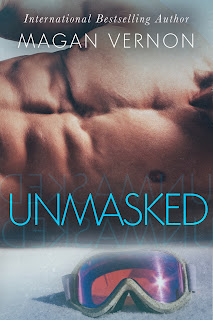 Can a hotshot snowboarder de-ice the ice queen?
At twenty-six, Blake Tremblay is one of the oldest snowboarders in the game. His sights are set on the gold medal, and he knows it’s now or never.
Kelly Johnson has spent her entire life skating and winning. She’s had no time for friends or an active social life, earning her the nickname “Ice Queen” – in and out of the rink.
Blake makes a bet without knowing all the terms. His ego won’t let him back out, even though his target is none other than the American Ice Queen herself.
What are the odds the dreadlocked playboy can warm the frosty figure skater when the real games are unmasked?
Let The Games Begin.

After a week of unrelenting stress it was with great joy that I picked up Ms. Vernon’s sports-fueled romance.  From the moment these two opposites meet under the shadow of a bet, their crackling connection captivated me and had me rooting for them with every turn of the page.  By the time I reached the end the grin on my face was unrelenting and I felt energized by the delightful couple whose hard-fought HEA reminded me of why I read romance books!

Blake Tremblay’s a wild man on the slopes.  From his untamed dreadlocks to his brash attitude he’s an athlete you can’t ignore.  Though he comes from winter sports royalty, he has yet to reach the pinnacle of snowboarding.  As the elder statesman in his sport, time is running out which has him determined to stay focused and make a memory.  What he gets though is an unexpected connection with a young woman who seems to be his opposite but who’s in fact perfect for him.  What starts out as a bet soon becomes all too real as he finds a family and a woman who support him unconditionally.  When the truth comes out though he’ll have to make a bold choice in order to undo all the hurt he caused in a charming and heartwarming Grand Gesture.  Blake’s a delicious hero who’s always tried to live up to his parent’s legend.  Falling short has caused conflict between them and feelings of frustration and disappointment. He lives life on the edge, the carefree snowboarder, and past relationships were momentary diversions.  With Kelly though he finds something meaningful, a woman and her family who show more acceptance and care for him than his own family.  Behind his brash nature is a truly sweet and sexy hero who sees exactly what the heroine needs and gives it to her.  Being with Kelly changes him, just as much as he changes her, and together they make a formidable couple.

Kelly Johnson’s always been focused on her sport.  Since she was very young she wanted to be a star ice skater and every decision she’s made has taken her one step closer to success.  Success comes with sacrifice though and for her it’s led to a lonely existence with virtually no friends and far away from her family. Life’s passed her by and with her career coming to a close she decides to do one unexpected thing...meet Blake Tremblay for drinks.  It’s a decision that changes her life irrevocably, giving her a few days to actually live and break free of her cool and collected facade.  When the truth comes out about Blake’s first meeting with her, she once again puts on her mask in an attempt to take the gold medal even though she feels as if she’s lost in an ending that kept me on the edge of my seat waiting in breathless anticipation.  Kelly’s a likable heroine who wants to succeed in order to help her family who’ve sacrificed so much for her through the years.  She’s close with her family in scenes that were heartwarming as they were unconditionally supportive of her.  While they were proud of her accomplishments, they just wanted her to be happy and through subtle words and deeds tried to matchmake between her and Blake.  Kelly may not have much experience when it comes to romance, with her one attempt resulting in betrayal and heartbreak, but her and Blake are crackling together.  There’s joy as well as tons of sexual tension between them and it was a delight watching them grow closer together to ultimately reach their HEA.

From the first page to the last I found this to be a story of decadent delights with a wonderful couple who made this story unforgettable.  Blake’s a wild child with a hidden heart of gold.  He’s sweet, sexy, and charming and was the highlight of this story for me.  Kelly was a good match for him.  A bit guarded at first but their time together gave her a reason to embrace life instead of hiding from it behind her sport’s-fueled Ice Queen facade.  Surrounding this compelling main couple were a cast of entertaining secondary characters who helped bring their individual sports to life in vivid detail.  My favorites were Kelly’s skating partner Logan and her younger sister Becca.  Logan was like a brother, protective and supportive, who tried at every turn to help her live a fuller life away from the ice.  Becca’s a star hockey player with her own fame.  She’s different from Kelly though as she lives life on her own terms.  She’s bold and tells it like it is and I’d love to see her and Logan take center stage in their own romance as their connection here was immensely entertaining.  This was my first time reading this author but won’t be my last as she crafted a book that literally made my week! 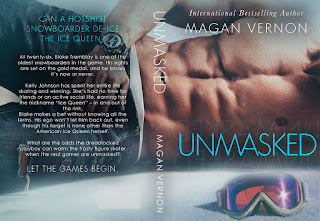 Magan Vernon has been living off of reader tears since she wrote her first short story in 2004. She now spends her time killing off fictional characters, pretending to plot while she really justwatches Netflix, and she tries to do this all while her two young children run amok around her Texas ranch.

a Rafflecopter giveaway
at November 18, 2017