Readers will find themselves captivated by this New Adult tale of unexpected love that started under pretense.  From there it’s a story of forbidden attraction teeming with sensuality and charm as an adviser becomes attracted to his student.  Keep reading to get a tempting taste of xo, Zach by Kendall Ryan, then count down the days drooling over this sexy book cover until its January 23rd, 2018 release date! 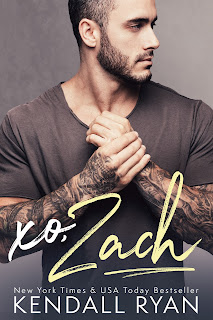 The first time we met was at a party.
Your ex arrived to show off the person he'd left you for last month, and you asked me to pretend to be your date.
I was more than happy to help. You were attractive, smart and witty--and that kiss we shared? It left me wanting you for days.
The second time we met was in my office on campus where we were both surprised to discover you were the new master’s degree student in poetry that I would be working with. You promised to be professional. I did no such thing.
The late nights and intense study sessions spent alongside you majorly throw me off my game. I want you, and I fight with myself daily over this fact.
I know I'm crass, that my sexual innuendos and dirty mouth annoy you, but I live for those two bright spots of color in your cheeks. If that's the only reaction I can get out of you, I'll gladly take it.
You hate Mondays so every Monday I slip an anonymous poem into your bag and your smile gets me through the week.
I think I'm falling for you, and I know it's wrong. I know that I'm only supposed to be your adviser and nothing more, but here's the thing. I think you're falling for me too.
xo, Zach

A New York Times, Wall Street Journal, and USA Today bestselling author of more than two dozen titles, Kendall Ryan has sold over 1.5 million books and her books have been translated into several languages in countries around the world. She's a traditionally published author with Simon & Schuster and Harper Collins UK, as well as an independently published author. Since she first began self-publishing in 2012, she's appeared at #1 on Barnes & Noble and iBookscharts around the world. Her books have also appeared on the New York Times and USA Today bestseller lists more than three dozen times. Ryan has been featured in such publications as USA Today, Newsweek, and InTouch Magazine.