With cold temps on the way readers will find themselves drawn to this collection of 18 erotically-charged tales from a wide variety of authors.  Keep reading to get a tempting taste of Snow and Seduction: A Steamy Reverse Harem Winter Collection, with its scorching stories where the heroine takes the reins, then add this collection to your bookshelf.  In honor of this decadent collection of delights make sure to fill out the form below for the chance to win a Kindle Fire 7 full of eBooks, one from each of the authors in this anthology! 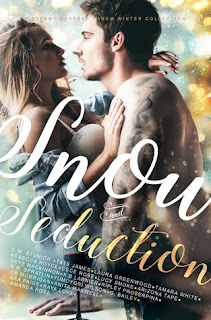 Warm up from that kiss of winter snow with eighteen steamy contemporary romance stories–reverse harem style. From international, USA Today, Amazon bestselling and debut authors alike, this collection features eighteen tales of love in winter.
And what could possibly keep a woman warm better than a heated holiday romance with the perfect guy? How about three or more perfect men in each story: from billionaires to snowboarders, rockstars, cowboys, and more. That’s right–each story has at least three male love interests and our heroine…she doesn’t have to choose.
She gets them all.

SLOPES OF SIN by Tate James.
The way Slade Knightbridge kissed was totally unlike anything I'd ever experienced. It was unhurried, careful, and deliberate but with a raw passion and possessiveness that sent a ripple of excitement coursing through me. I was playing with fire, making out with these two, and I knew it.
A tentative hand settled on my waist, and I resisted the urge to laugh. Who’d have ever thought the Kings of Snow would need direction in a three-way make-out? Sadly, that was probably all this could amount to, given that the lifts could start up again at any moment. Although … it’d be fun to race the clock...
Breaking from Slade’s possessive kiss, I stayed where I was in his lap but turned my face to capture Blaze’s lips with my own. While I quickly adjusted to his hot, demanding style of kissing, my hands snaked under the heavy waterproof fabric of Slade’s snow jacket until I reached the burning hot skin of his belly. He sucked in a sharp hiss, and I guessed my fingers were pretty damn cold since I had no gloves on.
Shifting my weight so that I straddled Slade, I kept my lips engaged with Blaze. Thankfully, he was a quick learner and slipped his hands beneath my own woolen clothing, grasping my breast through the thin lace of my bra as I moaned appreciatively.
My hands made quick work of Slade’s snowboard pants, and within moments I had his hot, hard length in my palms while his lips sucked and bit at the side of my neck.
"Fuck, Mila," he groaned as my hand began to move up and down his shaft.
"Oh shit," Blaze muttered, having pulled back from our kiss at the sound of his buddy’s voice. His attention was sharp on my hand as I lazily jacked another man off in front of him.
"Problem, Blaze?" I asked, like the cheeky shit I was. My voice was breathy and thick with lust, so I really hoped there wasn’t a problem here. I had zero intention of ever repeating this liaison so wanted it to end in a satisfying way.
Blaze shook his head slowly, not taking his eyes from Slade’s dick in my hand for a second until his teammate reached up and cuffed him in the head to snap him out of it.
"If there’s no problem, then what are you doing gaping?" Slade growled, then sucked a sharp breath as my hand tightened around his shaft. 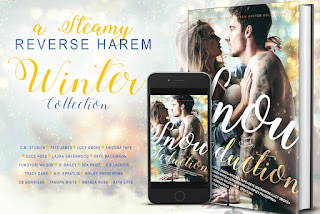 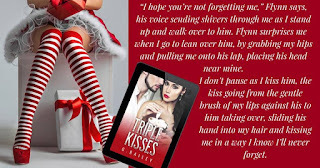 a Rafflecopter giveaway
at November 21, 2017