Readers will find themselves quickly consumed by this tale of a man whose life has been mired in grief who finds an unexpected connection with a woman living life to the fullest after discovering she might be living on borrowed time.  Keep reading to get a tempting taste of Dare to Live by S.B. Alexander, with its life-affirming romance set in the music world, then count down the days until it releases on December 12th.  In honor of this fifth installment in the Maxwell Series make sure to fill out the form below for the chance to win a Kindle Fire too! 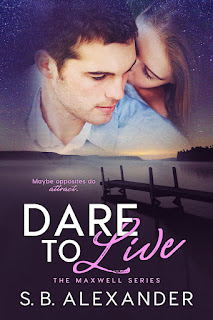 Maybe opposites do attract.
Kody Maxwell’s life has been rooted in grief and death. He tasted love briefly until the girl he loved died suddenly. Determined not to experience that kind of pain again, Kody prefers being alone and writing music. His life goal is to sign with a big-name producer who will take his music to the next level. But lately, he’s been struggling with writer’s block until he encounters a beautiful nurse with the voice of an angel. She brings out feelings he hasn’t experienced in a long time, and that scares the crap out of him. Still, he knows he can’t let her get away. She may have just what he needs to get his juices flowing.
Motorcycle-riding Jessie Ryan loves the thrill of danger and the exhilarating desire for speed. She plays by her own set of rules. But when she discovers she carries the breast cancer gene on the same day she meets the most gorgeous man she’s ever laid eyes on, she isn’t prepared to face what the future may hold.
As Jessie and Kody begin to form a bond, they learn things about each other and themselves they didn’t see coming. Will they dare to live when fear threatens to stop them? 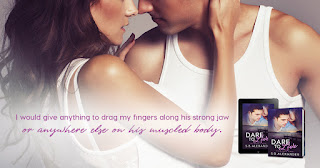 BUY THE OTHER INSTALLMENTS IN THE MAXWELL SERIES AT AMAZON:

S.B. Alexander is a bestselling romance author. Her books are filled with stories that tug at your heart, and are filled with romance, drama, action and suspense. As much as she loves to write, she also loves to read. Some of her favorite authors growing up were Stephen King and Edgar Allen Poe. She stills enjoy reading Stephen King. In fact, she loves most genres, although in the past three years she has gravitated toward the romance genre, which is when she started her journey to write her first book. Her motto: write what you love to read.
Aside from writing, she’s a huge sports fan, in particular, baseball. Since she hails from New England, she is a diehard Red Sox fan. She’s also a navy veteran and former math teacher, loves white powdered donuts, and handbags. Her husband calls her the bag lady. When she’s not writing, she enjoys playing golf and hanging out with friends and family.

a Rafflecopter giveaway
at November 27, 2017