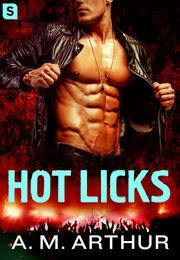 Benji Moore is living his dream traveling as the lead singer of his band. His life would be perfect if he could get his boyfriend, Josh, to commit to an exclusive relationship.
Even though Josh loves Benji, he has good reasons not to trust in long-term relationships. So Josh decides to take some time to himself and sublets a room at a friend’s beach house. But when he walks into the nearby Off Beat bar, he finds a bartender who may be a good distraction from his relationship problems.
Van Holt doesn’t do anything deeper than sweaty one-night stands. But when Josh sets his sights on him, Van is surprised by their connection. Except Van also doesn’t do complicated, and the situation between Josh and Benji defines complicated. But the more time Van spends with them, the more he’s realizing how hard it would be to let Josh and Benji go.
Can the three of them find a way together, or will they all end up going solo?

As a fan of rockstar romances I couldn’t wait to start reading this book!  Add in a scorching romance between not two, but three, engaging men carrying their own emotional baggage and I quickly became consumed by their rocky road to HEA.

Lead singer Benji has been with his boyfriend Joshua since they met in college.  It’s been a bit rocky for their open relationship lately though as Benji’s insecurities, and Joshua’s fears over his ability to commit, are putting their HEA in doubt.  Add in the tempting bartender Van and readers have even more doubt about their future as Van is a temptation that neither can ignore.  A drunken night and a lot of soul searching soon has Benji proposing an unconventional idea that slowly binds them together more tightly than ever before in a journey full of emotional ups and downs.  Benji’s a sweet young man with a past full of pain that’s left its mark.  He endured horrific bullying in high school for being gay, leading to feelings of betrayal by someone pretending to be his friend, and ending in an event that‘s made him feel insecure when it comes to sex.  He’s shy, despite being a rockstar, but has a kind heart and a desire to do whatever necessary to make the man he loves happy...even if bringing Van into their relationship brings back his painful past.  He seems a bit unsure at the start but gains strength to become more self-assured as the story progresses.  As he discovers who he is, and admits what he needs, he finally starts standing up for himself in an empowering act late in the story that had me cheering.

Joshua has his own emotional baggage because of his rocky relationship with his family and has felt very much alone when it comes to familial love.  He’s always enjoyed the openness of his relationship with Benji, but when Benji wants him to commit it leads to a break-up and a meeting with the sexy and soulful Van that changes all of their lives irrevocably.  Time apart makes them realize how much they mean to each other, but it also leads to lots of soul searching and admissions about their sexual needs.  Part of that need revolves around Van and how much better they are when he’s in the picture.  From there it’s a juggling of needs and boundaries that scorched up the pages.  Joshua’s a likable guy who’s going through a crisis of trying to find himself and what makes him happy.  He never thought himself capable of commitment but he works very hard on making his relationship with Benji work through lots of honesty and heartfelt talks.  He’s supportive and caring and I enjoyed his sweet side as well as his commanding one.

Van Holt’s the typical fun and flirty bartender, but his past is anything but typical.  He was adopted by a farm family who were deeply religious, judgmental, and physically punished him for being gay.  The only joy he found back then was music and the boy next door who introduced him to making music...along with other steamier things he taught him.  It ultimately led to tragedy and years on the road that changed Van inside and out.  He’s leery of opening up his heart again, content to go from one coupling to another, but the moment he meets Benji and Joshua he can’t get them out of his head.  Not wanting to harm their close connection has him hesitant to agree to their unconventional proposal, but once he does it leads to lots of erotically-charged encounters and an opening of the emotional floodgates through quiet moments of talking.  Van’s a wonderful balance to Benji and Joshua, the perfect conduit to both of their needs, and a good sounding board as they work through their relationship.  On the outside he appears carefree, but his past is very painful as his father hurt him in the worst way possible by crushing his dreams and his hopes for the future.  He clawed his way back to living and I was rooting for him every step of the way to find a chance to love and be loved again.

This was an entertaining read full of intense emotions and scorching encounters.  Sexuality was discussed in all its various definitions, giving a wide spectrum that was never judgemental.  At times the discussion pulled me out of the story, but it helped give greater insight into Benji and Joshua’s relationship.  I enjoyed getting to know each of these men through glimpses into their pasts, the tragic stories they told, that have left them bruised but not broken.  Together they found love and wholehearted acceptance and they were a formidable force when things got difficult.  There was a perfect balance between the erotic interludes and emotional talks that kept me fully invested in the story too.  The interludes were both tender and dominant with each man’s unique personalities shining through in the heat of the moment.  Readers once again got to see the colorful members of Fading Daze and the affect Benji’s relationship has on their future.  It leads to harsh words, hurt feelings, but ultimately makes them stronger.  Though this is the third installment in the Off Beat series, I had no trouble immersing myself in this world.  The characters were immensely likable, the feelings both raw and sentimental, and from the first page to the last I felt like I’d been put through the wringer alongside the characters.  Though the story got a bit off track when delving into the definition of sexuality, and a reveal late in the story came out of nowhere, I still found this an appealing story that now has me wanting to go back and see where it all started.

*I got this book from NetGalley for review in exchange for my honest opinion.
at November 25, 2017