Book Tour for A Daring Arrangement by Joanna Shupe (GIVEAWAY)

Fans of historical romances will find themselves drawn to this tale of a woman in love with the wrong man who sets up a fake engagement with a man whose reputation is even worse.  Keep reading to get a tempting taste of A Daring Arrangement by Joanna Shupe, in a romance of opposites attracting where no one is who they seem, then add this debut Avon romance to your bookshelf.  In honor of this first installment in The Four Hundred series follow the link below for US readers to have the chance to win a print copy of this book too! 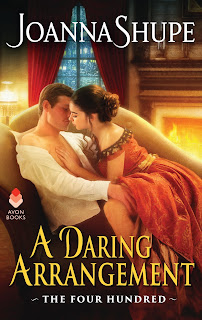 Set in New York City’s Gilded Age, Joanna Shupe’s Avon debut introduces an English beauty with a wicked scheme to win the man she loves—and the American scoundrel who ruins her best laid plans...
Lady Honora Parker must get engaged as soon as possible, and only a particular type of man will do. Nora seeks a mate so abhorrent, so completely unacceptable, that her father will reject the match—leaving her free to marry the artist she loves. Who then is the most appalling man in Manhattan? The wealthy, devilishly handsome financier, Julius Hatcher, of course...
Julius is intrigued by Nora’s ruse and decides to play along. But to Nora’s horror, Julius transforms himself into the perfect fiancé, charming the very people she hoped he would offend. It seems Julius has a secret plan all his own—one that will solve a dark mystery from his past, and perhaps turn him into the kind of man Nora could truly love.

Joanna Shupe has always loved history, ever since she saw her first Schoolhouse Rock cartoon. While in college, Joanna read every romance she could get her hands on and soon started crafting her own racy historical novels. In 2013, she won Romance Writers of America's prestigious Golden Heart® Award for Best Historical. She now lives in New Jersey with her two spirited daughters and dashing husband. 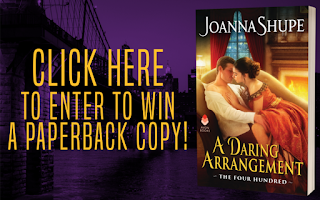 GO here FOR US READERS TO HAVE THE CHANCE TO WIN A PRINT COPY OF THIS BOOK!