Readers will find themselves drawn to this exhilarating thrill ride as former lovers are reunited through tragedy to end up in the middle of danger where it’s a struggle to stay alive while working towards HEA.  Keep reading to get a tempting taste of Perfect Gravity by Vivien Jackson, with its setting of a dystopian society driven by scientific technology, then add it to your bookshelf.  In honor of this second installment in the Wanted and Wired series make sure to fill out the form for the chance to win one of five copies of the first book in this series too! 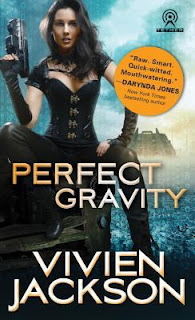 Second in a snarky, sexy sci-fi romance series with the perfect balance of humor, heart, and heat.
Kellen Hockley usually keeps quiet about his past, but once upon a time he loved a girl named Angela. He hasn't seen her in a decade, but now he has to break the news to her that his team of rogue treasure hunters accidentally killed her husband. He's had better days...
It's not the news that's delivered to Angela Neko that breaks her apart—it's the rumbly, Texas drawl delivering it. She can't believe she's hearing Kellen's voice again. But there's no time for distractions. When Angela's own life is threatened, yielding up all of her lies and secrets, she and Kellen must figure out how to reverse the geopolitical firestorm she lit to save the world, to save Kellen's cat...and just maybe to save each other.

Angela pressed the emergency stop, and their carriage paused. It was glass on the rear, but this far up, there wasn’t anything to see other than a painted elevator shaft. They were alone.
And she stood right in front of him, burning a look upward. Holy fuck, that look.
“What you—“
She put two hands on his chest and pushed him against the elevator wall.
He was stunned for the first half second, surprised enough that she got the jump on him, but he couldn’t let her win. Not without giving a little of his own back.
She was a little thing—he had forgotten how slight—and when his arms went around her and he cradled her ass, it was the easiest thing to lift her. Her legs came up, wrapping around his waist. Something in her tidy wool skirt tore, and she oomphed a breath against his teeth when he turned their bodies, still locked together, and pushed her back up against the elevator wall.
Better. The angle. She slotted snug against him, mouth to mouth, heartbeat to wild heartbeat. Her hands clamped the back of his head, crushing him into her kiss. Oh yeah, this was the Angela he knew, the girl only he knew. And he had missed this—had missed her—so fucking much.
Her teeth skidded against his, sharp and bright. He nibbled, drawing salt from her lip, and she groaned into his mouth. That count for consent? He thought it might, or maybe the fact that she’d all but attacked him in an elevator. Still, the gentleman in him needed to be sure.
“We gonna do this right here, then?” he rasped.
“At least once,” she breathed against his jaw. “Please tell me those jeans aren’t held together with a goddamn button fly.”
“Press seam,” he said.
“Thank all the made-up gods.” Her magic fingers found the seam and undid it, but the movement stole some of her concentration. Angela, the great multitasker, apparently couldn’t undress a man and pour kisses down his throat at the same time.
Kellen reared his head back and watched her.
Wild thing, his gal. He remembered so many times they’d been at this business, and always, always, it had been the death of him. A thousand deaths, a million surrenders. He’d never minded. He’d have given her anything, willingly, as often as she wanted.
But the man she was taking down that road right now wasn’t her nineteen-year-old toy. And he didn’t have a hankering to play the role for her again. He’d fought to become his own person. And that person couldn’t do this.
“Think we might pause here for a second, princess?”
She’d made quick work of his pants, and she had him out, clasped in her hot little fist. He couldn’t even process what that felt like. Heaven was too small a word.
“Angela.” Didn’t sound like his own voice, but he had things that needed saying.
She looked up, neither moving nor removing her hand. His arms were holding her up against the wall, and he couldn’t very well shift weight without dropping her unceremoniously on the floor. There was no way to make space between them, not at this point. Heat roiled in the interstice between their bodies. She never had liked the feel of knickers on her nethers.
“What?” Confusion broke through the naked desire on her face.
“That emergency call button only pauses us for three minutes,” he said, trying so hard to be gentle about this.
Her grin got sly instead. “You clearly have no idea how ready I am.” She squeezed, and his throat compressed in synch. “Why are we wasting all this time chitchatting?”
“Maybe what we need, actually, is a bit more chitchat. And a bit less fucking.” He shifted his weight, lowering her slightly, like he was about to disconnect them. She flicked the pad of her thumb over the head of his cock, and he damn near came on her hand. Shitfuckgoddamn. But he inhaled, slammed his eyes shut, and worked the hell through it. Took a few seconds, but he got steady.
Disbelief froze her mouth into an O, then she snapped, “Impossible to do less of a thing you aren’t doing. Or not yet doing. Who are you, and what have you done with my Kellen?”
“That’s kind of what I’ve been telling you, sweetheart. I ain’t that guy.” You sent him away, or did you forget? “You want my dick in your drawers and my mouth on your sweet spot, princess, I will require some wooing.”
“I distinctly heard you tell all those people at the table—the people you call family—that you were taking me to bed.” She stroked. Jesus. “I believe this is what you would call lying like a rug.”
“I said I was takin’ you to your bedroom.” Temptation shaved pieces off his will.
“That’s exactly what you said, and your intentions could not have been clearer.”
“Well, but after that, Yoink and your husband decided to come along to watch. Gotta say that damped my want-to some.”
She huffed a breath against his throat. “Look. I kicked them out into the corridor. Pressed the emergency stop. Problem solved.”
“It ain’t that easy.”
“Yes, it is.”
“I ain’t that easy.”
She tested her tongue against her upper lip then drew it back inside. “Are you saying you don’t want me?”
No, you insufferable woman. I will want you as long as there’s breath in this body, blood in these veins. And then I will love you longer still. “I’m saying we need to slow this down.” 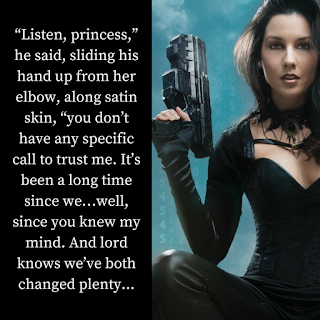 VIVIEN JACKSON is still waiting for her Hogwarts letter. In the meantime, she writes, mostly fantastical or futuristic or kissing-related stories. When she isn’t writing, she’s performing a sacred duty nurturing the next generation of Whovian Browncoat Sindarin Jedi gamers, and their little dogs too. With her similarly geeky partner, she lives in Austin, Texas, and watches a lot of football.

a Rafflecopter giveaway
at November 11, 2017