Book Spotlight on Anthem of Survival by Thom Collins 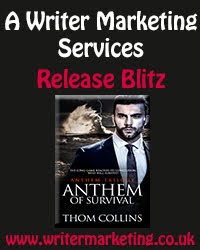 It’s been a sensual and exhilarating thrill ride for two men trying to make a future while being weighed down by the past in this pulse pounding m/m romance.  All good things must come to an end though and today readers get a look at Daniel and Elijah’s final journey.  Keep reading to get a tempting taste of Anthem of Survival by Thom Collins, then add this final installment in the Anthem Trilogy to your bookshelf too! 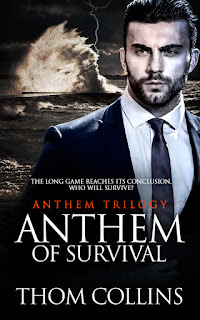 Will they ever escape the past?
Revenge casts a long shadow.
Following two prior attempts on their lives, Daniel and Elijah are together and stronger than ever. Their relationship has weathered the toughest elements and survived. Physically and emotionally scarred, the bond between them can’t be broken. One year on from the devastating events in Anthem of the Dark they have reassessed their priorities and want to spend time out of the spotlight.
Elijah has quit his stand-up career to focus on his new passion: training to be a chef. But for Daniel, there are too many questions he desperately needs answers to. Like who orchestrated the violence in Blackpool a year ago? Whose hatred of him runs so deep they’re ruthlessly prepared to hurt innocent by-standers? He teams up with journalist Keeley Rank to uncover the facts.
Though the truth is well hidden, it is closer than anyone thinks. Someone wants revenge. Someone intent on destroying Daniel anyway she can. When Daniel and Elijah attend a fundraising gala for a victim support charity they are unaware they are about to face their most perilous situation yet. Vengeance is a deadly game and not everyone will survive.

Daniel Blake, sitting on a shaded terrace in a pair of sun-bleached shorts, strummed a melody on his guitar. The afternoon sun blazed in a cloudless sky and, despite the protective canopy above him, the heat was intense. Beads of sweat ran down his neck, tracking over bronzed skin to the dark mass of chest hair. It glistened on his top lip as he gently chewed the bottom. With his eyes closed, he progressed through the strings. A moment later, he smiled, finally satisfied, and put down the guitar. He reached for the weathered notebook that had been his constant companion all summer and wrote in an eager, untidy hand.
Daniel had been working on the song for two days, both music and lyrics, and, at last, it was done. He had nothing left to add.
He lifted his gaze to the sky and inhaled full into his lungs. Across the terrace, the blue water of the Ionian Sea reflected the white light of the sun, its expanse an ever-changing collage of sapphire and diamond colors. Down the coast, the outline of Corfu Island was a hazy mirage in the heat. This perfect view had been his for six amazing weeks. The idyll would soon be over, but not yet.
Daniel lay back on the lounger and lengthened his arms above his head, stretching the stiffness in his neck. He’d been so absorbed in the song, ensuring every chord and every word were right, he’d ignored his own comfort and now his body ached. A few weeks earlier, he’d made the mistake of writing beside the pool, in the direct glare of the sun, and paid the price. Two painful days in bed with sunburn. Since then, he’d stuck to the shade while working on his music. He lost himself so much in the process it was easy to burm.
Daniel studied his body as he lay there. He’d never looked so good or been this tan before. There’d been no time to sunbathe in the past, he’d always thought it a waste of time. He had had too much to do, too much to achieve, to spend his days lying around a pool. But he’d realized this summer that a tan didn’t just suit him, it helped him feel better.
It wasn’t just the sun. Daily sessions in the pool and long walks on the beach kept him in shape. Coming off Lady Lynda, he’d had every intention of letting his fitness routine go a little, if only for the summer, but it hadn’t worked out that way. He was in better condition now than when he arrived, in mind as well as body.
His legs were strong, muscular and tan. He hardly recognized his own body. He inched down the top of his shorts to admire the contrast in color between the creamy skin below his waist and the coppery tones above. The villa was private and he could have bathed naked if he’d wanted to, except he wasn’t that kind of guy. Besides, tan lines were sexy. He’d always thought so. Who needed to risk a burnt butt and balls?
The one thing that marred the bronze color of his torso was the scars between his hip bones and ribcage, sustained the night Oliver Gill had stabbed him, and from the lifesaving surgery he’d gone through afterward. Before coming to Corfu, the pale scars had been almost unnoticeable on his white skin. His dark body hair just about concealed them. But as his tan deepened, the scars stayed white, becoming more pronounced, forcing him to look at them, to acknowledge them.
Daniel traced his fingers along the lines and indentations. Had he made peace with the disfigurement? No. But as the summer came to an end, he’d learned to accept them.
Daniel sighed and basked in the heat. Life was not so bad, considering what the last two years had thrown at him. Better than that, things were good. Not perfect, too many questions remained unanswered for that, but his optimism grew every day.
The glass doors of the terrace opened behind him and Elijah Mann stepped out, offering him a cold bottle of water.
“It’s hotter than hell out here,” Elijah remarked, shielding his eyes against the sun to gaze across the sea.
Daniel swung his legs over the side of the sunbed and sat up. He drank the chilled, sparkling water and looked with admiration at Elijah’s chunky thighs. While the sun had turned Daniel’s white-boy skin an appealing shade of bronze, Elijah, with his Greek heritage, had gone nut-brown. The beige shorts and blue open-neck shirt he wore today complemented his tan. God, he’s gorgeous. Daniel never had to remind himself what a lucky guy he was.
Elijah dropped onto the other sunbed, knees spread wide, and looked straight at him with soulful brown eyes. His thick blue-black hair fell in an untidy wave across his brow and a three-day beard darkened his jaw. With his natural Greek coloring, Daniel wondered if Elijah had ever looked more handsome. Even more important, he looked happier and healthier than he had in a long time. Less than a year ago he’d been in hospital, fighting for his life. Daniel wouldn’t ever forget how close he’d come to losing him. Those long, terrible hours beside his bed, praying he would recover. Hoping for the best, afraid of the worst.
“How’s it going?” Elijah asked, nodding at his guitar.
“I’m finished,” he answered, smiling.
Elijah’s eyebrows raised. “Really?”
“Absolutely.”
“Don’t keep me in suspense. Let me hear it.”
“What’s for lunch?” Daniel asked, feigning indifference.
Elijah leapt forward, grabbing Daniel’s bare waist, tickling the sensitive flesh around his middle. Daniel yelped and fell backward, giggling. Elijah followed through, lying on top of him, fingers still working his waist. Daniel laughed, squirming against his hard body. “No lunch today,” Elijah said, his face on top of Daniel’s. “Not until you play me your song.” 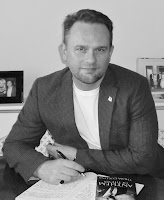 Thom Collins is the author of Closer by Morning, Gods of Vengeance and Silent Voices with Pride Publishing. The Anthem Trilogy is out now from Pride Publishing. His love of page turning thrillers began at an early age when his mother caught him reading the latest Jackie Collins book and promptly confiscated it, sparking a life-long love of raunchy novels.
He is currently working on a new novel.
Thom has lived in the North East of England his whole life. He grew up in Northumberland and now lives in County Durham with his husband and two cats. He loves all kinds of genre fiction, especially bonk-busters, thrillers, romance and horror. He is also a cookery book addict with far too many titles cluttering his shelves. When not writing he can be found in the kitchen trying out new recipes. He’s a keen traveler but with a fear of flying that gets worse with age, but since taking his first cruise in 2013 he realized that sailing is the way to go.