Unrequited love fuels this romance between an honorable hockey player and the woman still trying to recover from a painful marriage.  Keep reading to get a tempting taste of Anton by Brenda Rothert, along with my impressions of this emotionally intense sports romance, then add this first installment in the Chicago Blaze series to your bookshelf! 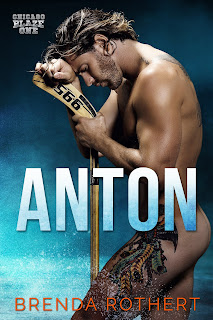 He’s known as Father Anton to his teammates—the brooding, sexy captain of the NHL’s Chicago Blaze has a reputation for…not having a reputation. Just like his diet and sleep routines, celibacy is part of Anton Petrov’s on-ice mojo. Or so they say. Anton stays mum on the subject. If the world thinks he chooses to abstain from sex, so be it. Better that than the truth getting out: there is a woman he burns for, but he can never have her. She’s his teammate’s wife, after all.
Mia Marceau is finally on her own. Now that she and her husband are living apart, she’s finding the peace she was desperate for. She spends her days in classes and late nights bartending, making her own way in the world at last. After what she’s been through, as long as her husband leaves her alone, she doesn’t plan to rock the boat. He still has the power to hurt those dearest to her, and she can’t demand a divorce with such a high cost.
A chance encounter with Mia has Anton hoping for a shot he never thought he’d get. And while she’s drawn to the intense, serious hockey center, Mia’s leery about playing with fire. That’s all Anton has ever known for Mia, though—a living, burning desire that won’t be denied—no matter the cost. 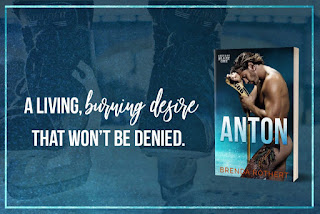 Hockey-fueled romances seem to be all the rage right now and yet into this crowded field comes this series starter about unrequited love and friendship, all wrapped up in a sweet and sensual blanket.  It’s a slow-burn romance between a star player with a heart of gold and a woman struggling to rediscover herself after years stuck in a marriage that’s tore her apart.  Along the way readers are introduced to an entertaining and drool-worthy roster of hockey players that I look forward to seeing more of in future installments in the Chicago Blaze series.

Anton Petrov and his brother Alexei have always excelled at playing hockey.  For Anton it involved lots of hard work and a regimented existence, while for Alexei it was pure talent that he doesn’t have to work too hard to achieve.  Coming to America gave them a new family, a chance to join pro teams, and for Anton...an attraction to a woman he has no business wanting to claim as his own.  From the minute he first saw Mia, his teammate Adam’s wife, he was drawn to her and it’s been a frustrating wait for him to get to spend time with her.  As an honorable man though it’s a wait that has him offering friendship while hoping for more.  Throughout this story his support for her shines through, his kind heart has him offering kindness with no strings attached, and it endeared him to me.  He treats Mia like a queen, helps her unconditionally while also caring for his uncle who’s a laugh-inducing curmudgeon.  Anton’s a highlight of this story, a new addition to my list of book boyfriends, and through each word and deed he warmed my heart even more as he made this book end with a definite HEA.

Mia Marceau came from rough beginnings, a woman who cares deeply for those she claims as family and who’s not afraid to work hard.  She was a strong-willed woman focused on a future of success, helping her grandparents live a life of comfort.  Getting married to the charismatic hockey player Adam was her downfall though as he pulled her from her plans for the future and stole her self-esteem through his abusive words and deeds.  Though she’s desperate to divorce him, her need to take care of her grandfather keeps her tethered to him as he continues to leave his mark on her soul in a heartbreaking reveal.  There’s tension and fear surrounding Mia when readers first meet her, but her burgeoning friendship with Anton has her becoming empowered and taking whatever steps necessary to get her old self back.  Their friendship is heartwarming and just what she needs as she’s been alone for far too long.  It’s a friendship teeming in sensuality that doesn’t go any further until her future is settled in an immensely satisfying interlude that had me cheering.  Mia’s journey was full of tears, degradations due to Adam’s vileness, and it pulled me in wholeheartedly for its realism and for her being able to overcome her past.  Through it all she’s a likable heroine, one who just wants to be loved for herself, be accepted by Anton despite her imperfections that made her all the more likable.  Theirs is a formidable pairing, one that’s hard-fought, and it put a smile on my face for their sweet and sensual journey to HEA.

This was an engaging series starter that presents readers with an immensely appealing main couple and their epic love story of friends to lovers.  With a hero who’s earned the title due to his unconditional support of Mia, his blatant love and concern for those he claims as his, readers will be charmed.  Mia is the easy to relate to heroine whose life pulls at the heartstrings and who you’ll be rooting for from the very first page to the last.  Their journey from friends to lovers felt natural, powerful in their unconditional support of each other, and it drives this story with heart and soul.  Surrounding this memorable main couple is an equally compelling cast of secondary characters that I’m longing to know more about it.  Anton’s brother Alexei is the exact opposite of his brother, an unrepentant player who lives life without a care in the world.  He’s almost living too much on the edge though, partying and drinking to excess, and it feels as though he’ll crash and burn soon.  Despite his devil may care attitude I still find myself tempted by him and hoping his story gets told soon.  Anton’s teammate Luca is another character that tempts me as he’s a good guy who has custody of his three nieces and nephews.  He’s trying to be a good father figure, balancing time on the ice and off, and I look forward to seeing his personal life take center stage.  Anton’s uncle Dix also pulled at my heartstrings, making me smile and bringing a tear to my eye in the end.  Though this story is set in the hockey world, this story is definitely focused on Anton and Mia’s relationship.  The moments spent on the ice are exhilarating though and I hope to see more of these scenes in the next installment.  The only criticism I have of this story involves Adam and the less than satisfying conclusion to his involvement in Mia’s life.  On a whole though this was an engaging series starter that has me counting down the days until we revisit the men of the Chicago Blaze.