Book Release Blitz for Fighting to Score by Lisa B. Kamps (REVIEW)

The past weighs heavily on a couple trying to start over in this romance full of angst set in the world of hockey.  Keep reading to get a tempting taste of Fighting to Score by Lisa B. Kamps, then add this twelfth installment in the Baltimore Banners series to your bookshelf too! 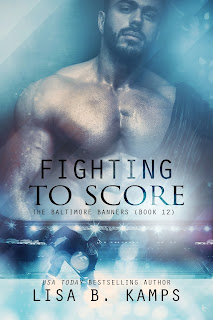 Shane Masters has it all: a promising career with the Baltimore Banners, a big house, fast cars, financial security, and—up until a month ago—the woman of his dreams. Now he's floundering, with no idea what he did wrong and no idea how to win her back. To make matters worse, her brother—Shane's former best friend—shows up and decides to get involved.
Chloe Hunter has never run from a challenge in her life—until the weekend she visits Shane in Baltimore and realizes he isn't exactly the same man she fell in love with all those years ago. He's too accustomed to getting what he wants and Chloe refuses to be just another prize for the taking. That doesn't mean she's giving up, not yet.
Shane will stop at nothing to win Chloe back. But when the past suddenly collides with the present, will he fight for a future with her—or will the game end before their chance to be together even starts? 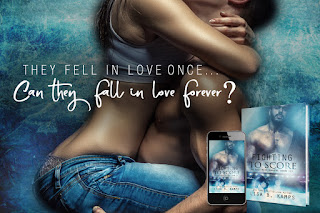 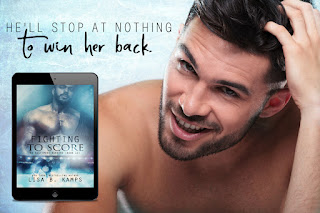 Guilt over the past weighs heavily on a couple hoping to start over as an accident from years ago tore apart a friendship and a burgeoning romance.  Brought back together after five years apart theirs is an angst-fueled tale, full of frustrating moments that had me wanting to smack both of the main leads a time or two.  With its story set amidst the backdrop of hockey, everything soon evolves into winning and losing and is a reason to root this couple on as they try to put the past behind them to finally claim the HEA they always dreamed of.

Shane Masters lost his family when he was young and quickly found a new home with his best friend Wyatt where they acted more like brothers than friends.  They were a focused duo, bent on becoming pro hockey players, and lived life to the fullest with that goal in mind.  Along with the strong bond he found with Wyatt, he found an attraction to Wyatt’s twin sister Chloe.  He and Chloe became focused on the future too, a future of them marrying and having a family.  Everything came crashing to a halt though on an icy night that changed all of their lives irrevocably.  Since then guilt has been Shane’s constant companion, had Chloe running from him in confusion, and left Wyatt bitter for all that could’ve been.  There’s a lot of self-hatred surrounding Shane and it had me aching for him.  In trying to do right, he always felt he was doing wrong and his frustration was palpable.  Chloe’s re-entry into his life put him on an emotional roller coaster where he made a few missteps but deep down his love for her was quite clear.  Heartfelt talks were the first step in starting over for all of them and I was particularly touched by the scenes between Shane and Wyatt as these two strong men brought a tear to my eye by sharing their truths.  Starting over was much harder when it came to Chloe though as jealousy, anger, and guilt had her lashing out at Shane and looking for a fight when all he wanted was to love her.  Chaos in his personal life poured out onto the ice and added an extra layer of frustration that saw his dreams slipping further away in this multi-faceted romance of forgiveness and acceptance.

Chloe Hunter fell for Shane the moment she saw him and she quickly became the third Musketeer to the tight bond he and Wyatt shared.  With their romance just starting to bloom there was much joy and many dreams for the future that were heartbreakingly torn asunder due to a tragic car accident.  The ensuing years left her adrift, confused by the man Shane’s become, and dealing with her own loss as well as helping her brother learn to live again.  Chloe’s life has seen a lot of pain, pain that’s changed her and left her leery of putting her heart on the line.  Her fear and confusion had her being purposefully hurtful to Shane at times which left me disappointed in her.  While he was pushing her to open up, she tended to withdrawal which added to the angst.  Despite my frustrations with her I still appreciated her devotion to Wyatt, a devotion that sometimes went over the top, but was always done out of love.  Chloe’s journey to HEA was definitely rocky, made harder by her own fears, but I still rooted for her as everything in her and Shane’s past made them stronger together than apart.


Though this is the twelfth installment in the Baltimore Banners series it stands strongly on its own, balancing the rocky romance of reunited loves Chloe and Shane with the secondary storyline of his best friend Wyatt finding a new dream to call his own.  Chloe and Shane’s journey will put readers through the emotional wringer as old hurts and guilt weighs on each of them.  The pain they both experience, their sensual and complex connection, is very relatable and through all their ups and downs I found myself fully invested in them and rooting for them every step of the way.  Along with an intense romance came exhilarating action on the ice which made me feel like one of the fans and had me gobbling up every glimpse we got of the players and ready to read the previous books in this series.  As a disabled person the part of the story that most pulled me in was that of Wyatt and his adapting to his new reality.  The anger and pity he felt for himself early on was spot-on and the following grief and ultimate acceptance had me cheering.  His story was empowering and I truly wish he’d gotten his own book so readers coul’ve gotten even more insight into disability and sports, along with disability and romance.  On a whole this was an unforgettable read full of angst and emotions that will pull readers every which way and I recommend it to all those who enjoy hard-fought HEAs.

Lisa B. Kamps is a USA Today Bestselling Author who loves cheering loudly for her favorite hockey team, the Washington Capitals. She came about the fandom honestly as she lives in Maryland with her husband and two sons (who are mostly sorta-kinda out of the house), one very spoiled Border Collie, two cats with major attitude, several head of cattle, and entirely too many chickens to count.
While Lisa writes a lot of hockey - one such series, The Baltimore Banners, features "…hard-hitting, heart-melting hockey players…" [USA Today], on and off the ice - she also delves deep *ahem* into the heat with a series of hot and heroic firefighters who put more than their lives on the line in the Firehouse Fourteen series. She's recently introduced a whole new team of hot hockey players who play hard and love even harder in her Banners' spin-off series, The York Bombers. The Chesapeake Blades--a romance series featuring women's hockey--also recently launched with WINNING HARD. Her newest series, Cover Six Security, will launch in early 2019.