When it comes to historical romances I can always count on Ms. Heath to entertain and her new release is yet another satisfying tale of a good man taken in by the family of the young woman who slowly fell for him before his self-doubts tore them asunder.  Keep reading to get a tempting taste of Texas Legacy by Lorraine Heath, then add this novella that’s part of the Texas Trilogy series to your bookshelf! 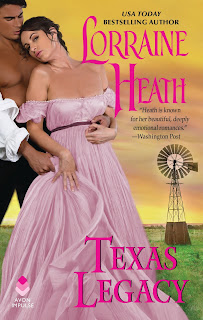 For as long as he can remember, Rawley Cooper has loved Faith Leigh. But the cruelty of his childhood haunts him and he knows he’s undeserving of Faith. When she comes to him on the night of her nineteenth birthday, they both give into temptation. But the searing kiss reaffirms what he’s always known: he can’t have a lifetime of her in his arms. To protect his heart, he packs his things and heads west.
Faith has always adored the boy her parents took in and raised. But she’s not certain she can ever forgive him for riding out of her life just when she needed him the most. When an urgent telegram forces him to return six years later, Rawley discovers Faith is now a woman to be reckoned with.
As old feelings are stirred back to life and new passions take hold, they both must confront secrets from their past or risk losing a legacy of love. 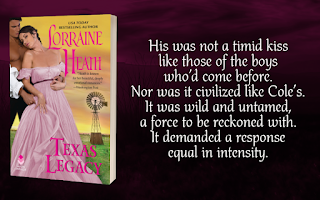 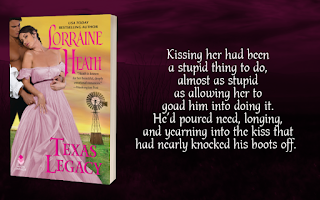