A good girl goes bad as a high school teacher’s forbidden attraction to a senior turns into a scorching romance that will keep reader’s glued to the pages of this compelling read.  Keep reading to get a tempting taste of Passing Grade by R.L. Kenderson, then add this contemporary romance to your bookshelf.  In honor of this sexy story make sure to fill out the form below for the chance to win 1 of 2 print copies of this book, along with the chance to win 1 of 10 e-copies of this book too! 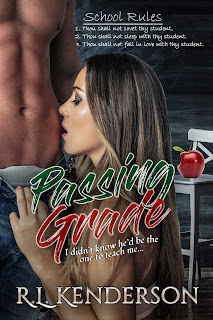 I’ve always been a good girl.
Sure, I speed, I drank before I was 21, I’ve played hooky, and there was the one time I skipped class in high school.
But I’ve never gotten detention, been pulled over, fired, or arrested.
I’m a good girl.
Until I wasn’t.
I’m a bad, bad girl.
I’ve wanted to be a teacher as long as I can remember, and I would never do anything to give that up.
Until I meet Mace Wagner.
The first time I saw him, I thought he was the assistant football coach. He was tall, broad shouldered, and the most beautiful man I’d ever seen.
I didn’t know he was my student.
I didn’t know he would screw my brains out.
I didn’t know I would fall in love with him.
I didn’t know I would risk everything to be with him. 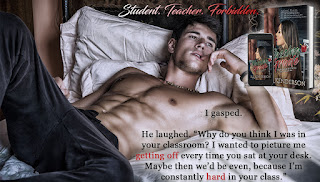 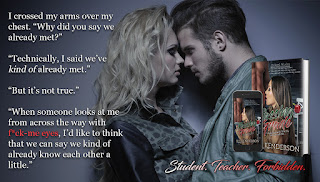 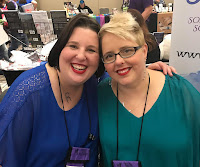 R.L. Kenderson is two best friends writing under one name.
Renae has always loved reading, and in third grade, she wrote her first poem where she learned she might have a knack for this writing thing. Lara remembers sneaking her grandmother’s Harlequin novels when she was probably too young to be reading them, and since then, she knew she wanted to write her own.
When they met in college, they bonded over their love of reading and the TV show Charmed. What really spiced up their friendship was when Lara introduced Renae to romance novels. When they discovered their first vampire romance, they knew there would always be a special place in their hearts for paranormal romance. After being unable to find certain storylines and characteristics they wanted to read about in the hundreds of books they consumed, they decided to write their own.
One lives in the Minneapolis/St. Paul area and the other in the Kansas City area where they’re a sonographer/stay-at-home mom/wife and pharmacist/mother by day, and together they’re a sexy author by night. They communicate through phone, email, and whole lot of messaging.