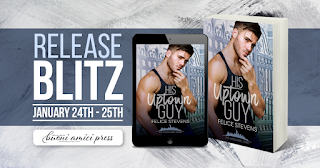 Two men from very different backgrounds find an unexpected connection in a romance full of heart and soul.  Keep reading to get a tempting taste of His Uptown Guy by Felice Stevens, along with my impressions of this powerful read, then add it to your bookshelf.  In honor of this charming m/m romance make sure to fill out the form below for the chance to win a $20 Amazon GC too! 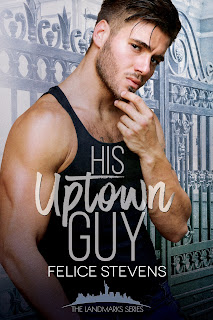 When Jesse Grace-Martin loses his father on 9/11, his charmed life is gone forever. People look menacing, and the streets no longer seem safe. After experiencing a brutal mugging, Jesse retreats to his apartment in the landmark Dakota building. Five years later, his first attempt to walk outside those famous gates again is a disaster—except for meeting the gorgeous maintenance worker who helps him through his crushing panic attack. Jesse can’t stop thinking about the guy but hesitates to reach out, knowing he has little to offer.
Dashamir Sadiko has big dreams. Money in the bank tops his list, and his peek into the life of the uber-wealthy at his job at the Dakota is all the incentive he needs. Struggling to work full-time and go to college, Dash desperately wants to break the cycle of poverty his parents had hoped to leave behind in Albania. When the two men become friends, Dash isn’t sure what to expect but can’t help his growing attraction to sweet and sexy Jesse. It’s nice to see how the other side lives, but his affections can’t be bought; Dash wants to be his own man.
Defying the Dakota’s co-op rules, the two share lunches, their hopes and dreams, and ultimately their hearts. Jesse slowly regains his courage, but he’s worried he’ll never be the person he once was and that he’s not good enough for Dash. And Dash isn’t convinced the son of poor immigrants’ has a place at the table with a blue-blood, trust-fund man. Jesse needs to realize that money can’t buy happiness and love, while Dash must learn to trust that what they have is real, that he’s more than Jesse’s walk on the wild side with an uptown guy. 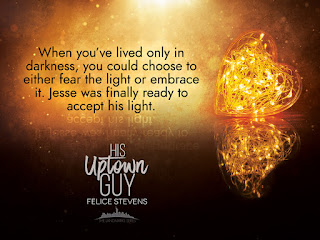 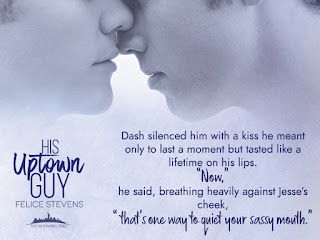 The theme of opposites attracting has been done many times before, but Ms. Stevens has put a fresh spin on the familiar theme with a storyline that charmed me from the first page to the last.  The personalities of the two leads shone through to pull me in wholeheartedly through the ups and downs of their journey to HEA.  It’s a journey weighed down by inner demons along with intrusions from the outside world that pulled at my heartstrings a time or two as I cheered this couple on through their hard-fought battle to its very satisfying conclusion.

Life in The Dakota Apartments seems lavish and comfortable, with money no object for the residents who live there.  For Jesse Grace-Martin though it’s become a prison of his own making.  After the death of his father on 9/11, and a mugging a few years ago, he’s been unable to go beyond his front door.  He works from home, has help from friends and others who bring necessities to him, and watches out the window as life goes by.  He’s been feeling a bit restless lately though which has him attempting to go outside with disastrous results as he’s overcome by a panic attack.  Luckily for him the caring and supportive Dashamir Sadiko comes to his rescue in the first step of them becoming friends...and eventually more in a romance that deals with their different financial backgrounds as well as Jesse’s agoraphobia.  Jesse’s an immensely appealing character, kindhearted and quick to lavish gifts on his friends.  He isn’t fixated on the financial differences between him and Dash, he just wants to be with him as Dash is a strong support to him in working through his disability without judgement or guilt.  I cheered him on as the realities of agoraphobia were vividly depicted, the palpable fear that had my heart aching for him.  His fractured relationship with his mother caused me even more heartache, compounded by the beautiful relationship between Dash and his own mother, in scenes where Dash played a pivotal role in helping Jesse and his mother work through their pain.  Their support for, and care of, each other warmed my heart and made them a formidable couple.

Dash comes from a working class family, one where he and his sister want more for their parents and themselves.  He’s a hard worker who dreams of success and keeping his job at The Dakota is paramount, which is why he fears his burgeoning feelings for Jesse so much as relationships are forbidden between workers and residents.  He’s drawn to him the moment he comes to his rescue, in awe of Jesse trying to go out in the world again, yet protective too.  He’s very aware of the financial differences between the two of them, tries to keep their relationship a secret as he doesn’t want to jeopardize his job, but their connection binds them together and has them slowly becoming more than just friends.  Dash is a sweet and caring soul, supportive yet never pushy in helping Jesse deal with his agoraphobia.  His relationship with his sister and mother was endearing, while you could sense the tension between him and his father.  His past is what makes him the man he is today and I enjoyed the glimpse we get of his home life, a glimpse that was realistic in its dichotomy to Jesse’s life of wealth.


This was a slow-burn romance that started out with a crackling first meeting. From there Jesse and Dash spent time as friends with tons of sexual tension surrounding them as they dealt with the internal issues weighing on them, issues that never overwhelmed the story but made their romance all the richer for the work they put into being together. Jesse and Dash were a very likable couple, easy to relate to, and I became quickly invested in their HEA. Surrounding this likable main couple was an equally appealing cast of secondary characters, ones who were larger than life and who added color and heart to this standalone story.  Miranda, Jesse’s assistant, was especially memorable for her protectiveness which sometimes flared too brightly but was always well-meaning. This was ultimately a sweet and sensual tale that wrapped me up in its warm embrace and I look forward to what Ms. Stevens crafts next.

Felice Stevens has always been a romantic at heart. She believes that while life is tough, there is always a happy ending around the corner, Her characters have to work for it, however. Like life in NYC, nothing comes easy and that includes love.
Felice has written over twenty books in the gay romance genre. Her books been translated into German, French and Italian. Her novel. One Call Away, part of her Soulmates series, was mentioned in Buzzfeed as one of the best “Out for You” gay romances of 2017.
Felice lives in New York City with her husband and two children. Her day begins with a lot of caffeine and ends with a glass or two of red wine. She recently retired from the practice law and now daydreams of a time when she can sit by a beach somewhere and write beautiful stories of men falling in love. Although there are bound to be a few bumps along the way, a Happily Ever After is always guaranteed.