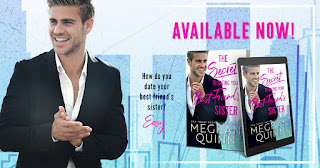 It’s an exhilarating romance of opposites attracting as a college player, now a rich man, finds himself desperate to finally claim his best friend’s cool and scholarly little sister.  Keep reading to get a tempting taste of The Secret to Dating Your Best Friend’s Sister by Meghan Quinn, along with my impressions of this entertaining read, then add this sexy and charming romance to your bookshelf! 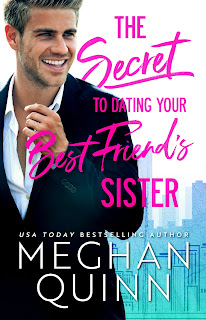 How do you date your best friend's sister? Easy.
Step one: Pretend you want her to set you up with someone else. That will bring the two of you closer.
Step two: Go on date with lots of random women, proceed to get stupid drunk and talk about your best friend's sister, thus gaining the courage to finally make a move.
Step three: Randomly show up at her apartment and confess your love. Women love that, right?
It all seemed so simple. A fool-proof three step process that will guarantee the love of you life to fall madly in love with you.
At least--that's what I thought was going to happen. But my attempts to win over Julia Westin backfired in more ways than I can count. The thing about Julia? She's smart--really smart--and her wicked gaze cuts through all the charm I've tried slinging her way. She's not interested in games, my gifts, or my stories. She might want me too; but she's not giving in that easy... 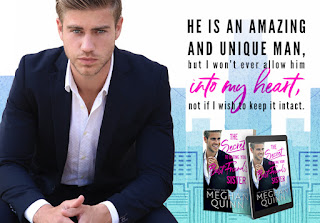 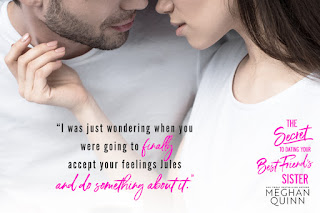 Readers will start the new year off right with this charming and sensual tale of a man with a year’s long crush for his best friend’s sister who finally decides to do something about it in a journey full of delightful interactions and moments of frustration.  In a story that held me captive from the first page to the last I found my emotions running the gamut from smiling to feeling frustration with the heroine, but I was always entertained and by the end I had found a new book boyfriend.

Bram Scott has always been the life of the party, the man other men want to be and the man every woman wants.  His college years were full of fun and partying, but those acts belied the studiousness that reflected the competitive side that his family brought out in him.  With a brother who was seen as the golden child, he’s always tried to be better and earn his family’s respect as they saw him as a useless party boy.  From the moment he met Rath Westin though he knew he’d found the friend that felt like a brother, but it was his introduction to Rath’s little sister that changed his life irrevocably.  Though she appears to be the opposite of him in style and personality he found himself drawn to her from their first meeting at a frat party where she turned away from his advances.  Those feelings have only intensified throughout the years and when a bet between friends gives him the chance to get closer to her, he’s happy to lose the bet and sign up for her dating service in order to get closer to her.  The journey to capture her attention though doesn’t go smoothly as her low self-esteem has her blind to his true feelings.  But in true book boyfriend style he never gives up and through sweet and sexy words and heartwarming actions he  not only wins readers over...but slowly and surely he wins her over too.  Bram’s a delicious hero who’s seen as lacking when it comes to his family, but also when it comes to Julia as she’s super smart and focused.  He’s anything but that as he’s made millions, is successful, and is still wanted by women.  Bram’s focused when it comes to his attraction for Julia and everything he says and does with her will have readers swooning as he’s the perfect blend of sweet and sexy and I was drawn to him from the very first page.

Julia Westin has always felt awkward.  With her tube socks, high IQ, and thick glasses it’s easy for her to be overlooked and with a brother who’s the center of attention she’s content to sit in the corner watching.  Though she too has always felt an attraction to Bram she’s always felt unworthy of him as she isn’t his typical kind of woman.  Watching him interact with other women all these years she’s become blind to the longing glances he always sends her way which led to much frustration for readers as his flirtations went right over her head.  It’s a slow and sensual journey to HEA for them, one made even longer by her insecurities.  Despite my frustrations I still found Julia to be an endearing heroine, a bit geeky and a bit awkward.  She’s super smart though and I applaud her success in helping other awkward people find love, but I just wish those smarts would’ve helped her see the truth sooner.


This story gave me lots of warm fuzzies and lots of smiles courtesy of its pitch perfect hero and its heartwarming romance of opposites attracting.  From the first page to the last I was utterly charmed by the hero’s moments of caring and found a few blushes along the way too with the hero’s blatant verbal foreplay. Julia was a bit more reserved, a bit more cautious when it comes to matters of the heart, but once she allowed herself to be with Bram her reservations melted away and readers get to see her coming out of her shell.  It’s quite clear they’re meant to be a couple, with their combustible connection and fun and flirty banter.  This is a story teeming with sexual tension which means readers will be waiting awhile for them to heat up the sheets, but it’s ultimately a wait that’s well worth it as their interludes were steamy yet playful.  The wait gave this duo a chance to truly know each other though through heartfelt talks and made readers even more invested in this likable couple.  Surrounding this appealing main couple was a cast of equally likable secondary characters.  Juila’s lone friend Clarissa was a good support to her, encouraged her to always be herself whenever self-doubts rolled in, but it’s clear that they too are opposites as she’s an outgoing woman who easily embraces her sexuality.  It’s Bram’s friends though that really left their mark.  Rath is Bram’s other half and their friendship is as important as breathing to the two of them.  They are closer than friends, closer than brothers, and it says a lot about Bram how proud he is of their closeness.  Bram’s a man in touch with his feelings and it’s another reason he endeared himself to me.  Rath is supportive of his sister, caring, and watchful of her over the years and I applaud their close-knit connection.  He’s a player though, a carefree man who’s sexy and smart and I look forward to seeing the kind of woman to capture his attention.  Roark McCool is Bram’s other friend and is a sexy Irishman who has a surprisingly soft side when it comes to helping his friend.  He’s unsettled though with anger issues and the tendency to drink a lot.  He too is a player and quick to talk about his conquests, but the dichotomy of good guy/wild man has me obsessed with him and hoping his story is soon told.  On a whole Ms. Quinn has crafted yet another winner with delightful banter and characters that you want to be friends with and I’m now left counting down the days until we revisit these unforgettable characters! 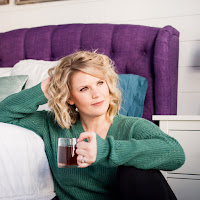