Two people dealing with familial chaos find themselves drawn to each other when threats to one of them becomes a threat to their HEA.  Keep reading to get a tempting taste of Hot Target Cowboy by June Faver, with its enticing romance between a strong and steady oldest brother and the little sister of his brother’s friend, then add this western to your bookshelf.  In honor of this second installment in the Dark Horse Cowboys series make sure to fill out the form below for the chance to win 1 of 5 copies of the first book in this series too! 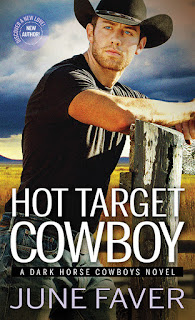 His loyalty is to his family. But his heart belongs to her.
Eldest son Colt Garrett is the biggest, strongest and steadiest of the Garrett brothers. Colt accepts his responsibilities, knowing his future is tied to the land. Colt has stayed centered—but when he falls in love, he falls hard. He is mesmerized by Misty Dalton, the younger sister of one of his brother’s friends.
Misty Dalton has held together a family plagued with problems since her mother passed away. But when the threats to her family turn deadly, Misty turns to Colt. If anybody wants to hurt Misty, they’re going to have to go through the toughest of the Garrett boys first.

Colton tried to console her. It was unthinkable that Misty and her younger brother had been dealta double tragedy.
Now, she would be alone on the Dalton Ranch with only the elderly couple and her twelve-year-old brother. Unthinkable.
The doctor escorted them back to the cubicle so Misty could have a moment to say goodbye to her father.
Colton stepped aside, trying to allow her some privacy.
Mr. Dalton looked as though he was sleeping, and didn’t appear to have been in distress when he passed, although he must have been.
Misty wept silently, her shoulders bowed and shaking. Her queenly posture was bent to her grief.
An attendant in scrubs, carrying a clipboard, entered the cubicle. “Pardon me, Miss. Have you made arrangements for your father?”
Misty raised her tear-ravaged face to stare at him.
“We’ll take care of that.” Colton stepped forward and offered his phone number. “I’ll call when we have a decision.”
He gathered Misty by the shoulders and led her out through the automatic doors, through the teeming ER waiting room and into the night. Once in the truck, he headed back toward their homes. “I’m going to take you to the Garrett ranch tonight. We can stop and pick up Mark. I don’t want the two of you to be alone.”
“Thank you.” She raised her red-rimmed eyes to meet his gaze. “I—I don’t know. I think there are some arrangements for my father. The—the hospice service knows.”
He nodded, reaching to take her hand. “Don’t worry. You need some rest. We’ll figure this all out tomorrow.”
When he pulled up to the Dalton house, the sky was growing lighter in the east. He left Misty sitting in the truck and went inside to gather Mark and a couple of changes of clothing. He didn’t tell the boy the reason for the impromptu sleep-over, but helped him into the truck beside his sister.
“What’s going on?” Mark asked when he got a look at Misty’s face.
“Oh, Mark. Daddy’s dead…and so is Joe,” she wailed.
Mark looked stunned, as though he had indeed been dealt a hard physical blow. “Dead? You mean, like…dead?”
Colton started the truck and pulled out. “Joe was in an accident and your father’s heart gave out. I’m sorry.”
Misty curled her arms around her younger brother. She pulled him against her shoulder and leaned her cheek atop his. “I’m so sorry, too. We have no one else. Just each other now.”
Colton wanted to tell her she was wrong…that he was there for her and for Mark, but he knew he should just keep quiet. This was not the time for his declaration of love.
Mark raised his head, his expression stunned. “Don’t worry. I’ll get a job. I’ll take care of you.”
She stroked his cheek, but he continued to gaze at her in bewilderment.
Colton cleared his throat. “I want the two of you to stay at the Garrett ranch until we can get things sorted out.”
He drove home as quickly as he could. They passed the scene where the Dalton truck had lain on its side, but it had apparently been hauled away. Only the place where Joe had ripped through the fence and his tire tracks were evidence to mark the site of his death.
Colton turned in at the big horseshoe-shaped gate, drove the circuitous drive and pulled up to the Garrett ranch house. Shepherding Misty and Mark inside, he found his father had risen early. Big Jim was making coffee in the kitchen when Colton passed by. Their eyes met briefly. Big Jim’s expression questioning and Colton’s closed up.
He deposited Misty in a guest room and showed Mark to another. “Get some rest,” he said. “We’ll figure things out when you wake up.”
When he joined his father back in the kitchen, he could see Big Jim looked somewhat irritable. Colt held his hands up as though to ward off the oncoming storm. “Hold on, Dad. These two lost their father tonight as well as their older brother.”
Big Jim’s expression changed to one of concern. “Damnation! What happened?”
Colton shook his head. “I was taking Misty home and we saw her brother’s truck turned over and the State Troopers were there. I thought he must have had an accident, but the trooper said he’d been shot dead.” He paused to let this sink in.
“Shot? Are you saying he was murdered?” Big Jim’s brows drew together.
“Looks like it. And then when we got to the Dalton place, her father had been taken to Amarillo to the hospital. He was on hospice and he couldn’t take the news of Joe’s death. Shortly after we reached the hospital, Mr. Dalton passed on.” He blew out a deep breath. “At least she got to tell him goodbye.”
Big Jim reached out a hand and gave Colton’s shoulder a squeeze. “Tough situation, son. I can see why you brought the Dalton kids home with you. Do they have any other family who can take them in?”
“I have no idea. Let them rest and we’ll try to sort this out tomorrow.”
“Speaking of rest…it looks like you could use some.” Big Jim took a sip of his coffee. “Why don’t you go catch some sleep? I’ll wake you when the Dalton kids start stirring.”
Colton stifled a yawn. “Good idea. I have to call the hospital back to let them know what to do with Mr. Dalton’s body. Misty said some kind of arrangements had been made through the hospice service, but it’s too early to call.”
Colton headed to his room, treading as quietly as he could and unbuttoning his shirt as he went. Once inside, he walked out of his clothes and fell across his bed. Sleep overtook him in a matter of seconds. 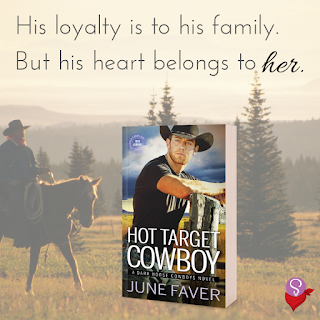 June Faver loves Texas, from the Gulf coast to the panhandle, from the Mexican border to the Piney Woods. Her novels embrace the heart and soul of the state and the larger-than-life Texans who romp across her pages. A former teacher and healthcare professional, she lives and writes in the Texas Hill Country. Find her at https://www.junefaver.com/