It’s an exhilarating thrill ride found amongst the pages of this paranormal romance that kept me on the edge of my seat.  Keep reading to get a tempting taste of Cowboy in Wolf’s Clothing by Kait Ballenger, then add it to your bookshelf.  In honor of this second installment in the Seven Range Shifters series make sure to fill out the form below for the chance to win one of five copies of the first book in this series too! 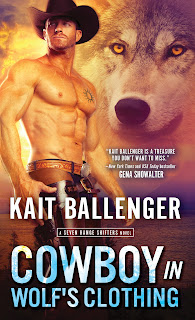 Born a cowboy and bred a warrior...
High Commander Colt Cavanaugh has spent his life defending his pack and its sprawling ranchlands. But the hardened Grey Wolf soldier has a dark secret that could destroy his life forever.
Belle Beaumont is a wanted woman, on the run from the wolf pack that kidnapped her. When fate brings her face-to-face with the Grey Wolf High Commander himself, rivalry becomes passion, and suddenly more than just her freedom is at stake.
Colt will fight to the death for the healing Belle brings to his battle-worn heart—and for this cowboy wolf, all's fair in love and war... 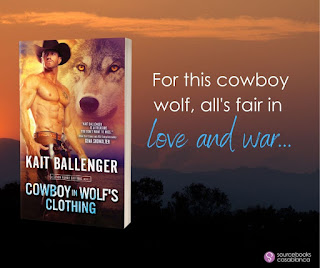 Kait Ballenger earned her B.A in English from Stetson University followed by an M.F.A in Writing from Spalding University. After stints in multiple careers, Kait finally decided that her eight-year-old self knew best: that she was meant to be a writer. Kait lives in Florida with her husband and young son. Follow her HERE.