Book Spotlight on Rainbow Above Us by Sharon Sala (GIVEAWAY)

A woman who lost her home and family in a hurricane finds unexpected love with a man who’s come back home to help a loved one rebuild and who has no intention of staying in this small town romance full of anger, heartbreak, and ultimately HEA.  Keep reading to get a tempting taste of Rainbow Above Us by Sharon Sala, then count down the days until this book releases on June 25th.  In honor of this eighth installment in the Blessings, Georgia series make sure to fill out the form below for the chance to win 1 of 3 copies of the previous book in this series too! 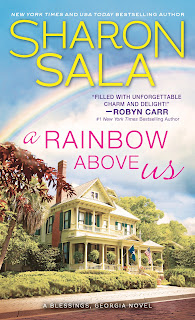 What will it take to bring people together?
Hurricane Fanny left no one in Blessings, Georgia unscathed—including Rowan Harper, the only surviving member of her family. Rebuilding her life now seems almost impossible.
Bowie James comes back to help repair his grandmother’s house, but he doesn’t intend to stay long. He and his mother were forced out of Blessings a decade ago, and he’s neither forgiven nor forgotten those responsible.
But Rowan is kindhearted, beautiful, and lost, and Bowie discovers that he can entrust her with his deepest secrets. If only their love could bring hope and healing to everyone around them, maybe they’d be willing to give it a chance…

Bowie pulled up at his motor home and got out. He was almost at the steps when he heard a laugh that cut to his core. He knew it was Rowan. He didn’t know what had made her laugh like that, but it was such a joyful belly laugh that he was already grinning when he unlocked the door and walked in.
The trio was sitting at the dining table, playing cards. Ella looked up and waved.
“You’re back! Thank God. We’re playing strip poker, and I’m losing.”
He grinned. His aunt Ella was missing both shoes and her skirt. Luckily for all of them, she still favored slips.
But it was Rowan who startled him most. The quiet, dark--eyed beauty was doubled over with laughter, and every time she looked up at Pearl, she started laughing all over again.
Pearl was blushing. “It’s not funny, missy. Just because you’re still wearing all of your underwear doesn’t mean you shouldn’t worry.”
Rowan couldn’t even look up. She just rolled out of her chair onto the floor, laughing until tears were running down her face.
Pearl slapped the cards she was holding facedown on the table and pointed at Rowan.
“Bowie, take this snippet with you to Piggly Wiggly so we can put our clothes back on. I’ve never played such a game in my life.”
Ella laughed. “Mama, don’t lie. I remember you and Daddy playing this after you put me to bed.”
Pearl gasped and then blushed again. “Well, never mind.”
Rowan groaned. “Oh my God…somebody help me up. I can’t breathe,” she said, and then covered her face.
Bowie couldn’t take his eyes off her…flat on her back on his floor, so gloriously sexy he could hardly think.
“Well, get her up and out of here,” Pearl said, and then hid a grin. Even she was entranced by the unexpected delight.
Bowie moved toward Rowan. When she held up her hand, he grasped her by the wrist, her hand engulfed within his fist, and pulled her upright.
“Thank you,” Rowan said, and then turned loose of him and ran around the table to hug Pearl. “I’m sorry, sweetie, but thank you for the first joy I’ve felt since before the storm.”
Pearl kissed the side of Rowan’s cheek and hugged her back. “I’m happy to have been of service.”
Rowan started giggling again. “I need my shoes. I think I left them in the master bedroom. I’ll be right back,” she said, and bolted toward the back of the motor home.
Bowie was a dedicated bachelor with an image to protect, but they had yet to pass one night under the same roof, and he was already feeling a complication in his life that he didn’t need.
“I’m back,” Rowan said, and snagged their grocery list from the table.
“Then I guess we’re off,” Bowie said. “You sure you two don’t want to come with us?”
Ella shook her head. “I guess we’ll pass. I’m not dressed, and Mama isn’t wearing underwear, so there’s that.”
Rowan was still giggling when she got in the front seat with Bowie and buckled up.
“Oh my word…I didn’t know I could still laugh. That was the best medicine ever,” she said, and then burst into tears and started apologizing.
Bowie handed her a pack of tissues from the console.
“Honey, don’t apologize. I grew up with three women. There’s little I haven’t already seen or heard about.” Then he grinned. “I can’t believe you got Gran to play strip poker.”
“It was Ella’s suggestion, and then she kept losing. Pearl is the one who made me laugh, though. I guess she figured if she shed her drawers, she could still maintain her dignity…unlike Ella, who just peeled stuff off as she went.”
Now Bowie was chuckling, imagining Gran getting up and taking off her panties.
“What did she do with them?” he asked.
“She heard you drive up and sat on them,” Rowan said. “That’s when I burst out laughing.”
That image was too priceless to ignore. Bowie laughed all the way to the Piggly Wiggly.
Right before they got out, Bowie paused. “I don’t know what’s on the list, but if you have things you need that you might be embarrassed about, I can easily wait up front and just pay when you’re finished.”
Rowan shrugged. “Mama died when I was ten. Daddy raised me. He’s the one who told me about the birds and the bees and all the girl stuff. I’m used to shopping for all that with a man, so I’m fine if you are.”
“Then we’re good,” Bowie said. “Remember…three women and me.”
Rowan grinned. “We’re quite a pair, aren’t we?” she said, and jumped out. He got out and followed her into the store, trying not to think about what it would be like to be part of her world. 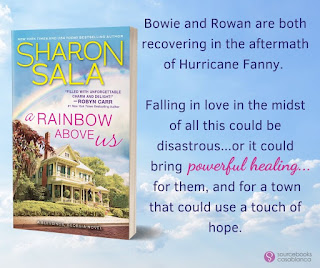 SHARON SALA has over one hundred books in print and has published in five different genres. She is an eight-time RITA finalist, five-time Career Achievement winner from RT Book Reviews, and five-time winner of the National Reader’s Choice Award. Writing changed her life, her world, and her fate. She lives in Norman, Oklahoma. Visit her on the web HERE.