A woman of wealth seeks to help those in need despite her privileged upbringing while running afoul of her father’s lawyer as sparks fly between him.  Keep reading to get a tempting taste of The Rogue of Fifth Avenue by Joanna Shupe, then add this Regency romance to your bookshelf.  In honor of this first installment in the Uptown Girls series make sure to fill out the form below for the chance for US readers to win a print set of the books in Ms. Shupe’s Four Hundred series too! 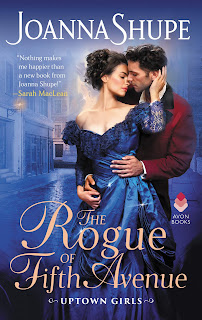 Silver-tongued lawyer.
Keeper of secrets.
Breaker of hearts.
He can solve any problem...
In serving the wealthy power brokers of New York society, Frank Tripp has finally gained the respectability and security his own upbringing lacked. There’s no issue he cannot fix…except for one: the beautiful and reckless daughter of an important client who doesn’t seem to understand the word danger.
She’s not looking for a hero...
Excitement lies just below Forty-Second Street and Mamie Greene is determined to explore all of it—while playing a modern-day Robin Hood along the way. What she doesn’t need is her father’s lawyer dogging her every step and threatening her efforts to help struggling families in the tenements.
However, she doesn’t count on Frank’s persistence…or the sparks that fly between them. When fate upends all her plans, Mamie must decide if she’s willing to risk it all on a rogue…

I will agree but only if you kiss me.
The thought came unbidden, a whisper from deep in her brain. Her gaze darted to his mouth, those full lips that flirted and cajoled every time they parted. What other feats could his mouth and lips perform, if needed?
Stop, Mamie. You have been listening to Florence too much these days.
She let her lids fall and tried to calm her racing heart. Chauncey. He was her future husband, the only man she should be lusting over. Desire for Frank Tripp was a complication she could not take on right now.
A finger swept under her chin to turn her head—and her eyes flew open. Frank was openly studying her, his stare hot and intense, with the gentle press of his finger holding her in place. The air in the carriage turned charged, an electricity that seemed to jump between them like alternating current. Her heart thumped in her chest, so loud she was certain he could hear it.
“Do we have a deal, Mamie?”
There was that deep grating tone again, the one she’d not heard him use before tonight. “Yes,” she heard herself whisper.
The side of his mouth hitched, a flare of male satisfaction lighting his gaze. He dropped his hold on her and before she could blink he rapped on the roof. “Here!”
The wheels slowed as the vehicle pulled over. She blinked in confusion. “What about seeing me home?”
“My driver will ensure you arrive safely. Remember our bargain. Good evening, Miss Greene.”
And he disappeared out the door and into the dark Manhattan night. 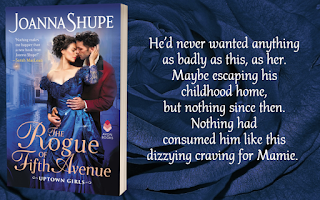 JOANNA SHUPE has always loved history, ever since she saw her first Schoolhouse Rock cartoon. While in college, Joanna read every romance she could get her hands on and soon started crafting her own racy historical novels. In 2013, she won Romance Writers of America's prestigious Golden Heart® Award for Best Historical. She now lives in New Jersey with her two spirited daughters and dashing husband.