It’s a scorching attraction between the pages for a woman gaining societal notoriety as well as financial wealth in the gaming underworld and her reunion with the sexy and smart man with a head for business.  Keep reading to get a tempting taste of How to Best a Marquess by Tina Gabrielle, then add this book to your bookshelf.  In honor of this second installment in the Raven Club series make sure to fill out the form below for the chance to win a $25 Amazon GC too! 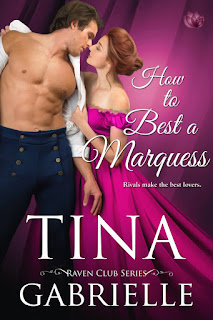 Lady Ellie Swift learned at an early age that men were more trouble than they’re worth. Now she’s all grown up and is the toast of society. Only she has secret ambitions to run her brother’s infamous gambling establishment—the Raven Club. Everything is progressing as planned until the man who broke her heart, Hugh Vere, the Marquess of Deveril, wants to take over the club. Dark, dominant, and strikingly handsome, Hugh’s reputation for sin precedes him, and suddenly, her dreams—and her heart—are in jeopardy.
As rakish as Hugh appears, he has a sharp mind for business. No one stands in the way of what he wants, not even the fiery-haired beauty from his past. From the moment he sees her again sparks fly, but he knows better than to fall for the lady. According to Ellie, the battle lines have been drawn and Hugh doesn’t stand a chance. But the nearly combustible chemistry between them is hard to ignore, and soon the club is not the only prize he wants… 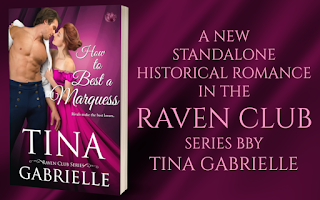 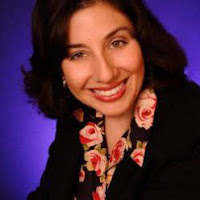 TINA GABRIELLE, an Amazon best-selling author, is an attorney and former mechanical engineer whose love of reading for pleasure helped her get through years of academia. She's the author of adventurous Regency romances In The Barrister's Bed, In The Barrister's Chambers, Lady Of Scandal, and A Perfect Scandal from Kensington Books. ""A Spy Unmasked"" is the first book in her new Regency romance series, ""In The Crown's Secret Service,"" from Entangled Publishing. ""At The Spy's Pleasure"" will be available in May 2015. Tina's books have been Barnes & Noble top picks, and her first book, Lady Of Scandal, was nominated as best first historical by RomanticTimes Book Reviews.