Readers will find themselves drawn to this historical romance that takes place in post-Civil War America as a woman of color puts her life on the line to help others while finding love with a man not chosen by her father.  Keep reading to get a tempting taste of Rebel by Beverly Jenkins, then add this African American romance to your bookshelf.  In honor of this first installment in the Women Who Dare series make sure to fill out the form below for US readers to have the chance to win a print copy of Ms. Jenkins’ classic book Tempest too! 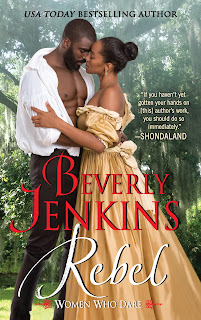 The first novel in USA Today Bestselling Author Beverly Jenkins’s compelling new series follows a Northern woman south in the chaotic aftermath of the Civil War...
Valinda Lacey’s mission in the steamy heart of New Orleans is to help the newly emancipated community survive and flourish. But soon she discovers that here, freedom can also mean danger. When thugs destroy the school she has set up and then target her, Valinda runs for her life—and straight into the arms of Captain Drake LeVeq.
As an architect from an old New Orleans family, Drake has a deeply personal interest in rebuilding the city. Raised by strong women, he recognizes Valinda’s determination. And he can’t stop admiring—or wanting—her. But when Valinda’s father demands she return home to marry a man she doesn’t love, her daring rebellion draws Drake into an irresistible intrigue.

“Is it a love match?”
Val paused. It was now her turn to study him. She replied truthfully, “No, it isn’t. I take it you believe there is such a thing?”
“I do. You?”
“There are no love matches in my family or in the families of my acquaintances, so I err on the side of saying no.”
“Raimond and Sable have one, as did my parents, as did our great-grandparents Dominic and Clare.” He added softly, “Love is real, cheri.”
The passion he put into the words, coupled with his accent were such a heady combination, if he professed the moon was made of ice cream she’d ask for a bowl and spoon. She eyed his full lips and remembered the gentleness of his fingers on her scraped cheek. Common sense urged her to get up and run from him like her slips were on fire because Drake LeVeq was dangerous in ways an engaged, untouched woman like herself couldn’t even imagine, but lord help her, she was drawn to him. 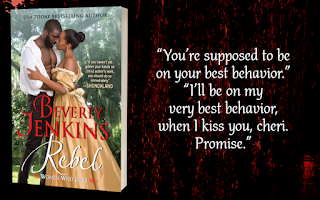 Beverly Jenkins is the recipient of the 2017 Romance Writers of America Nora Roberts Lifetime Achievement Award, as well as the 2016 Romantic Times Reviewers’ Choice Award for historical romance. She has been nominated for the NAACP Image Award in Literature, was featured in both the documentary Love Between the Covers and on CBS Sunday Morning. Since the publication of Night Song in 1994, she has been leading the charge for multicultural romance, and has been a constant darling of reviewers, fans, and her peers alike, garnering accolades for her work from the likes of The Wall Street Journal, People Magazine, and NPR.