Book Tour for A Cowboy’s Salvation by Megan Ryder (GIVEAWAY) 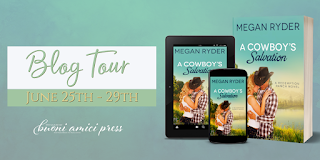 Second chances abound in this western contemporary romance that brings together two people with painful pasts regarding what makes a family.  Keep reading to get a tempting taste of A Cowboy’s Salvation by Megan Ryder, then add it to your bookshelf.  In honor of this first installment in the Redemption Ranch series make sure to fill out the form below for the chance to win 2-$10 Amazon GCs too! 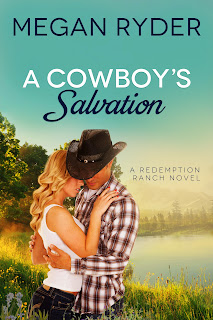 He wanted to be left in peace...
West Morgan knows all about second chances. After bouncing from foster home to foster home, he finally landed at the Rawlings Ranch as a teenager. There he found a home, something he’d never thought possible. Now an adult, he realizes he’s been given much more: a family and, most importantly, peace. But when his mentor dies and leaves the property divided among his foster brothers and his mentor’s daughter, Tara Rawlings, the fragile future he’s built for himself is threatened.
She wanted to be free of her past...
Tara Rawlings swore she’d never end up with someone like her father, a man completely focused on the ranch to the exclusion of his loved ones. She created a new life for herself in San Francisco, running an interior design company and getting married, then divorced. When she returns to settle her father’s estate, she finds that her birthright is in jeopardy. And the only way to save it is to work with West Morgan, the one man she has always resented—and always found irresistible.
Can they save the ranch without killing each other … or falling in love?

West had Tara right where he wanted, pressed up against him for a slow dance playing on the jukebox. Probably the last one before the band started playing for the night, unless his other brother decided to sing. Ty was partial to ballads. He said the girls loved sad love songs and the soulful men who sang them.
West pulled her close and she relaxed against his body, her hands winding around his neck to tangle loosely in the strands of hair there. She leaned into him, her lower body rubbing up against his, igniting the embers to a fire that never seemed to go out around her. His blood pounded in his veins, a slow molten burn that spread throughout his body and settled low in his groin. He settled his chin on her head and breathed in the fresh citrus scent of her hair and peace settled over him, a peace he had experienced in only one other place.
"You need a haircut, cowboy," she murmured against his chest.
He let his hands drift lower down her back, just above the curve of her ass, to pull her even closer. "I've been busy.”
She ran her fingernails along his scalp, a gentle bite that sent a tingle through his nerves. "Don't cut it on my account. I like you a little bit messy. You don't seem so perfect this way.”
He grinned and plunged his fingers into her blonde waves, artfully arranged, messing up the long strands until she looked less sculpted. "Then you won't mind if I return the favor. Now you look like we just had some fun in the barn.”
She closed her mouth and swallowed, watching him warily. He spread her hair over her shoulders, watching the lower strands brushing the tops of her breasts. Her tongue swiped out and licked her lips and he groaned, dying to take her lips in a kiss, but not here, not in front of everyone.
"You're killing me." He pulled her close again and closed his eyes, thinking about cows, manure, anything but the sweet smelling, sexy lady he had pressed up against him, swaying so gently in all the right places. Even thinking of Douglas didn't douse the slow fire burning in his veins. She rotated her hips, grazing his groin in a move that was too targeted to be an accident. He stilled her hips and she chuckled, the sound vibrating against his chest.
He playfully slapped her ass. "Bad girl. Settle down or I'll have to treat you like Black Jack.”
She lifted her head and smirked at him. "Is that a threat or promise?”
Before he could answer, the music stopped, and she started to step away, but he tugged her back. He bent down and whispered, "You just wait until we get home, lady. We'll see if that was a threat or promise.”
She shivered but the secret smile remained on her face.

Ever since Megan Ryder discovered Jude Deveraux and Judith McNaught while sneaking around the “forbidden” romance section of the library one day after school, she has been voraciously devouring romance novels of all types. Now a romance author in her own right, Megan pens sexy contemporary novels all about family and hot lovin’ with the boy next door. She lives in Connecticut, spending her days as a technical writer and her spare time divided between her addiction to knitting and reading.