Sparks fly the moment two more seasoned individuals meet in this sexy romance set in the world of hockey as a romance writer finds her own romance with a coach who’s ready to put his rocky past behind him...before his past comes calling again.  Keep reading to get a tempting taste of Jared by Kat Mizera, along with my impressions of this thirteenth installment in the Las Vegas Sidewinders series to your bookshelf! 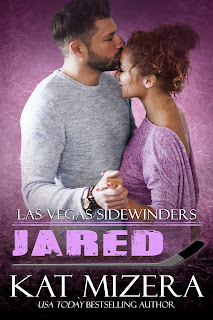 The game of love has no rule book...
Former hockey star Jared Wylde is tired of living life on the sidelines. Ten years ago, he lost it all... his career, his wife, his entire world. Everything changes when he's offered the job as head coach of the Las Vegas Sidewinders. It's taken him a long time to let go of the past, but it turns out the past isn't ready to let go of him.
Bestselling romance author Renee DeSantos lives life on her own terms. After overcoming being widowed and sending her daughter off to college, she's finally putting herself first. Everything is going great, until a one-night stand with a sexy stranger unveils what she's been missing. Now that she's had a taste, she's not ready to let go... of him, or the future they could have together.
When the past comes knocking, a son Jared never knew about turns everything upside down. Renee is no stranger to plot twists, but the stakes are higher than ever this time. This is one game Jared doesn't want to lose, but can they score a happily ever after? 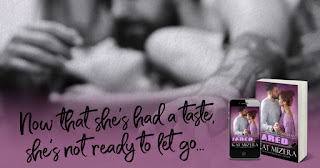 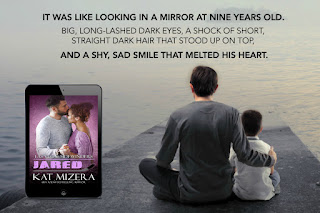 Fans of sports-fueled romances will find themselves frantically turning the pages of this story featuring a more seasoned couple, a couple with intense pasts full of losses, who finally feel fully ready to start over.  With a crackling connection that brings them together early on, it’s an unforgettable one-night stand that tempts them both to go after more in a slow-burn that has them getting to know more about each other.  Outside forces though soon intervene to cause doubts as their lives go in an unexpected direction due to a big secret that will test the intensity of their feelings.  From the first page to the last readers will be on a rollercoaster ride of emotions, caught in the chaos of many different life events landing at this couple’s doorstep throughout the story, feeling wrung out yet satisfied by The End.

Jared Wylde was once a star hockey player with a good life and loving wife...until a drunk driver took it all away.  The accident left his body permanently broken while his anger drove his wife away which left him a bitter and lonely man who’s finally getting his life back under control.  Helping coach the Sidewinders to the Championships opens the door to more for him, gives him the chance to coach permanently, and introduces him to the one woman to capture his attention.  Theirs is a scorching connection, one that starts off with fireworks, before making time to actually get to know one another.  It’s that foundation that will be a necessity when Jared gets an unexpected addition to the life he’s just started making for himself.  Jared’s a sexy and self-assured man with a past riddled by the heartbreak of his career-ending accident and the alienating fall-out that followed.  He’s slowly built himself back up and now exudes confidence in all areas of his life.  On the ice he’s more than ready to coach while when it comes to the bedroom he’s been more than content in keeping things casual.  He freely admits his player lifestyle which is why his attraction to Renee, a very confident woman with her life already planned out, is all the more profound.  He doesn’t want her as just a fling and does all he can to get her to see him in her future.  The discovery of his long-hidden son though leaves their future in doubt as he new wanted to be a father.  Seeing his fatherly side emerge though endeared Jared to me and showed a surprisingly softer side to him that made the scenes with his son even more powerful.  His son has both of them questioning everything they thought about what they really want out of life in this emotionally engaging romance that kept me glued to the pages..

Renee DeSantos was once a loving wife to her high school sweetheart with a daughter and a life full of struggles in order to survive.  It’s been 16 years since her husband died and her life’s finally her own with her daughter away at college and a career that provides very well for her.  Things are good, if a bit lonely though when it comes to men. She’s not ashamed to say that casual hook-ups have met her needs previously but they’re starting to feel lacking and it’s clear she wants more.  When it comes to friends though she’s rich as the wives and girlfriends of the Sidewinders players have claimed her as their own and it’s this connection that introduces her to the tempting Jared. Theirs is a sizzling connection from the start with a friendship full of sexual tension that leads to moments of push and pull as they decide if they can become long-term. His discovery of his son will cause even more indecision for her in a self-debate that I found easy to relate to.  Renee’s an immensely appealing heroine with a sad past that had me rooting for her from the very start.  She made a few mistakes along the way with her daughter but it’s clear that’s it’s made them stronger.  Her career is one I dream of and I enjoyed the glimpses we were given into her writing world, a world that formed a cute connection to the Sidewinders women and to Jared too.  Renee’s a strong-willed heroine who goes after what she wants, is unashamed by having wants, and her self-confidence made her connection to Jared sizzle even more.  The death of her husband changed the trajectory of her life all those years ago and being with Jared will change things once again in this story full of introspection that kept me guessing until the end.

The Las Vegas Sidewinders series has been reliably entertaining through the twelve previous books and this installment is yet another winner.  I liked seeing a more mature couple, one already set in their ways, and quickly got caught up in the chaos of their lives as fate threw some surprises their way.  These surprises pulled at my heartstrings (Jared discovering his son) while also frustrating me (Renee’s daughter Daisy and Jared’s godson Zio) as it all made for a slightly bloated story.  There was A LOT going on here, too much at times that distracted from the core romance, but it’s still a romance that I found to be decadently delightful.  Though I wish Jared and Renee had spent more time together I still found their romance to be a hard-fought journey to HEA with scorching interludes and banter that felt like endless foreplay.  Surrounding this likable main couple was an equally entertaining cast of secondary characters who felt more like family.  I liked seeing past couples and enjoyed the playful interactions between the characters, enjoyed the brotherly connection between Jared and the other players, and it all made me feel like one of the family.  I look forward to where Ms. Mizera takes us next as she continues to craft this series that may take place on the ice but sizzles in real life! 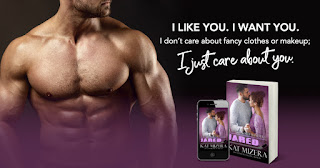