Friends become lovers in this charming tale that put a smile on my face.  Keep reading to get a tempting taste of Sour by Jennifer Woodhull, along with my impressions of it, then add it to your bookshelf.  In honor of this delightful contemporary romance make sure to fill out the form below for the chance to win a $25 Amazon GC! 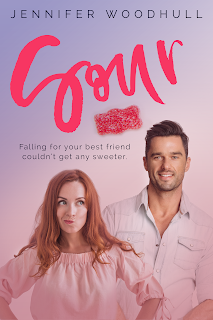 Tall, handsome, and eternally optimistic Noah has dated a string of gorgeous women. His best friend Elle has outlasted them all. Of course, he has no idea she's been in love with him for years. Why would he? It's not like she's going to tell him. After all, she's short and awkward, and as he's fond of reminding her, has a sour disposition.
When Elle takes off on her annual ten-day vacation with her family, Noah comes to a startling realization. She's the woman who is by his side day in and day out, whose office is across the hall, and whose house is around the corner. She has called him on his shit when he gets too cocky, and he has held her in her arms when her heart was broken. Absence must make the heart grow fonder because while she's in Germany with her parents, he realizes that everything he has ever wanted was right there all along. Now he's on a mission to make her realize that romance won't ruin their friendship, but platonic friendship is ruining their relationship.

As a fan of friends to lovers romances I gobbled this one up.  From the first page to the last I discovered many charming moments in a tale that made me smile.  From its sweet and sensual banter to its laugh out loud interactions the main couple of this story shined and kept me fully invested in their slow-burn romance.  Was it a perfect romance?  No it wasn’t, as it went on a bit too long and showed its main couple to be a bit too overreactive at times.  Despite these small issues though I still enjoyed this book and can still picture these two friends as a very happy couple.

Elle Bailey considers Noah Adler her best friend, the one person always on her mind and the first person she wants to share things with.  After a recent trip abroad, one that left her unable to communicate with Noah, she realizes that things have gotten even more intense between them.  For her, friendship has evolved into love...but it’s a love she’s afraid to voice as she doesn’t think she’s worthy of this sweet and sexy man.  Her low self-esteem is holding her back and leaves readers hanging on in anticipation as Noah makes his burgeoning feelings quite clear throughout the story.  Elle’s a likable heroine who loves her family and whose interactions with them were endearing.  She’s a funny heroine too, one who’s flippant and quick to laugh at herself.  She’s someone you can see yourself being fiends with and I was rooting for her every step of the way to see herself as wonderful as Noah sees her.

Noah’s a delicious hero, one whose feelings for his friend caught him by surprise.  He’s always felt close to Elle but her recent time away makes him realize just how important she’s become to him and how desperate he is to claim her as his own.  In some ways Noah’s plans for Elle and their future are a bit overbearing, a bit too presumptive, but his joy in wanting to make her feel cherished was equally endearing.  Once he realized his feelings he was set on his path, methodically going through each step in the path to HEA that he just needed to convince her of.  Though it’s a bumpy ride to HEA, it’s one that made me smile in a pairing that crackled.

On a whole this was a delightful tale that was a slow-burn full of sweet and sexy interactions.  The story may have started out carefree but when their feelings were finally revealed the story took on a more heartfelt turn that invested me even more fully in each word and deed.  This was my first time reading a book from Ms. Woodhull, but definitely won’t be my last due to her clever crafting of friends becoming lovers!

We all need moments of escape. With all the demands on us day in and day out, we each need something just for ourselves. Perhaps nothing provides a private moment - a brief respite from every day - like escaping into a great story. When you pick up one of my books I hope you find that place that you can escape to. Explore the streets of Paris with new heroines or fly around the world to reclaim your lost love with a favorite hero. Whether it's the romance that takes your breath away or those climactic encounters that make your pulse race, I hope you find that solitary moment of enjoyment while lost in one of my stories.